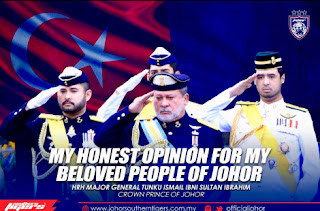 The big event last night was the launch of the BN Manifesto dubbed by Dato Salleh Said Keruak as the best manifesto in history.

Despite a pathetic PH manifesto, in which Tun Dr Mahatahir acknowledged could not fulfill within 17 days after launch and he U-turned several items on their manifesto, one could only expect Lim Kit Siang to fulfill his duty as the ever defiant and subversive opposition leader to oppose for the sake of opposing.

Not to mention, the cynics and nitpickers among opposition's fanatics are spewing rude and vulgar comments on the social media. Nothing unusual of the current phenomenon and its declining  effectiveness as BN's firepower flex their muscle to meet the call of duty of a general election.

Before commenting on the manifesto, the biggest political bomb last night was the remark by his highness the Tengku Mahkota of Johor.

Bigdog gave the manifesto launch a miss and posted Titah Tuanku: Make changes from within.

FMT reported the gist of the titah and attempted to counter the impact. Read below: 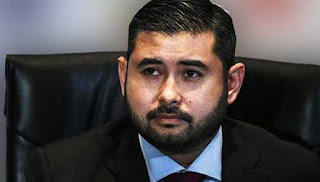 PETALING JAYA: Johor crown prince Tunku Ismail Sultan Ibrahim has launched a veiled attack on Dr Mahathir Mohamad, as the Pakatan Harapan (PH) chairman makes a tour of the state ahead of the general election.

Without naming Mahathir, the crown prince popularly known as Tunku Mahkota Johor (TMJ) said the former prime minister was responsible for stripping the powers of the Sultan, in an apparent reference to the constitutional amendments of the 1990s.

“Do not be easily manipulated into believing whatever you heard last night in Pasir Gudang,” he wrote on his Facebook page tonight, referring to PH’s rally yesterday where Mahathir announced the coalition’s decision to use the PKR logo at the coming polls.

“Johor state will never forget that individual who tried to disband the Johor Military Force (JMF), an organisation that has stood since 1886 and that same time, dreaming of diminishing the Sultan’s power, belittling our constitution that has been here since before the inception of the country called Malaysia.”

Mahathir had in 1992 engineered a campaign to remove the Malay rulers’ immunity under the law, following a controversy involving a hockey coach and the then Johor ruler, Sultan Iskandar Sultan Ismail, the father of the present ruler Sultan Ibrahim Sultan Iskandar, and TMJ’s grandfather.

The following year, after an intense media campaign led by Mahathir, Parliament passed amendments to remove legal immunity of the Malay rulers.

Sultan Ibrahim is one of two Malay rulers who have openly criticised Mahathir, the other being the Sultan of Selangor.

The Johor ruler is unhappy with, among other things, Mahathir’s opposition to the Forest City project near Johor Bahru.

TMJ in his post also recalled his childhood memories at the height of the crisis between Mahathir and the Johor palace.

“I won’t forget the year 1992. Back then I was a small and naughty kid in school. My teachers would say, ‘Do not play the fool, you are royalty, if I were to report you to Mahathir, you are done for’.”

TMJ said he was aware that “people are discouraged by the leadership of the country”, but added that problems could be fixed if Johoreans allowed their sultan to address problems in Umno, saying it was a party formed in Johor, “in a Johor’s state palace to be exact”.

“Don’t change the boat if the engine is not broken, don’t even change the skipper but allow HM The Sultan of Johor and I to work with the skipper. Change what needs to be changed and upgrade what needs upgrading for the sake of our beloved country,” he said.

“In my view, Umno needs to have more assets than liabilities. It means Umno needs to revamp the way it governs, change the way it thinks and it’s policy,” he wrote in the post, which he said was his “honest” and “personal opinion”.

TMJ said Johoreans should not be “fooled by a forked tongue individual”.

“At the moment he is not trying to save the country, he is more worried of what will happen to his children in the future. Even the wealthiest person on earth would not be able to give birth to three ‘billionaires’.

“My advice to the people of Johor is, if you have a problem with the government then raise your voice and let them know what you want. All of you have me and HM Sultan of Johor to convey the peoples voice to the highest leadership in the country.

“Never for once think that we have no initiative to fix the system within the government.” 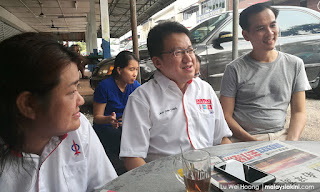 In a thinly-veiled criticism of former premier Dr Mahathir Mohamad posted on Facebook last night, Johor Crown Prince Tunku Ismail Sultan Ibrahim had urged the people of the state not to be fooled by a “forked-tongue” individual.

However, an overwhelming number of netizens disagreed.

A few chose to be blunt despite the possible ramifications, but the majority were polite in reminding the crown prince that as a constitutional monarchy, the royals should not appear to be taking sides in a political contest...

Sadly, this was after Joceline Tan wrote on the role of palace in Johor politics. There were nuances in our discussion of possible MBs for Johor.

DAP politicians must relying on purely slanted public discourses and media reports. He may not be aware of happenings during Sultan's visits to the kampongs in Muar district.

It is one reason Tan Sri Muhyiddin Yassin career in politics will end soon.

Liew is being typical of any opposition MPs. He spent too much time in Kuala Lumpur and playing national politics without realising that the Bangsa Johor cry in Johor is not just a Malay thing and Southern Tiger have cut across all races.

TMJ is much adored by youth in Johor and had been a unifying factor for Johor. Even Namewee will not tolerate such disrespectful comment against TMJ.

Parents have been fully appreciative of TMJ's effort with youth through Johor FC. It not only brought about a sense of pride for Johor, but diverted youth from negative social elements.

Bravo TMJ! many a time forked tongued individual and ingrates must be reminded that cannot continue insulting the way they fancy! You have returned them to their places! That their politics belong in the gutter!

Hi bro AoB,
1. TMJ's Johor Southern Pages FB post had more than 18,000 comments. How many actually supported HRH TMJ's stand.
2. Nevertheless as TMJ is Royalty we wont comment further.
3. Bro AoB, as an analyst we must be the first to sense winds of change. For example in the financial markets one could have made millions if one sensed the protectionist talk and shorted Boeing, Apple and the entire market.
3. Markets are the best disciplinarian. Go long BN when the market is going short will not make u money.
4. PH decisively won the first weekend in terms of the psychological war. The PH momentum is currently unstoppable.
5. Be an analyst, examine the data. If your confident Jho Low will win, (yes its meant to be the way u take it), then double down and insult Tun x 1000.
5. If your not, then make the biggest swing trade of your life and short BN.