Will there be post-Raya resolution to 1MDB with Jho Low detention? 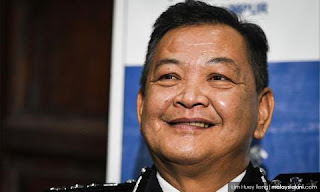 There have been murmuring as to why the new IGP, Dato Hamid Bador is talking to the media too often.

Hamid Bador's frequent presence in the media is ridiculed as a new artiste on a popularity campaign.

One thing noticeable is the frequent attack of DAP towards police and Hamid Bador's statements are diverting it away. His willingness to implement IPCMC albeit watered down killed off critics.

The statement that is getting the sinister remark is the one on Jho Loh. Latest being Hamid Bador said he will be detained soon.

It will mean Jho Low will be "shanghaied" to Malaysia soon, after Raya perhaps.

Not saying Jho Low is in Shanghai or China as it would mean Daim or his people must be playful and childish not able to keep a secret or shut their f*c&ing mouth. Only a handful of people could know.

Nevertheless, Jho Low could be in Macau or Taiwan or even the remote possibility of Russia, hidden away by his minder.

There was a conspiracy theory claiming Jho Low is part of an espionage network aimed to destroy Malay Muslims and Malaysia.

Media have been giving attention to Jho Loh with sensational story of sex scandal and now Psy of Gangnam fame comment of friendship being reported as though preparing public for an eventuality.

Through their global network, Special Branch is capable of detaining Jho Loh.

SB brought back Musa Ahmad, Shamsiah Fakeh and few more dissident Malay members of the Communist Party of Malaya decades ago. This happened before the spermazoa Syed Saddiq existed to attempt entry into the proverbial egg.

Hamid Bador could be telling the truth or acting. However, Tun Dr Mahathir and Tun Daim dropped too much hints that it is possible that Jho Low could be talking to them through their representatives.

There are hints too of Jho Loh being in China and in communication. Only it is doubtful Jho Low could assist Daim's negotiation with China on ECRL. He is a fugitive on the run and his past connection has no value. It is only money that is sustaining him. 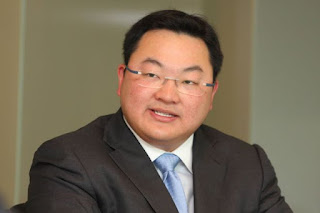 Could Jho Loh be negotiating for a plea bargain?

It is possible he could be doing so since he could assist the government to recover the money he has allegedly stolen.

He has not been challenging the forfeiture and sales of asset linked to him in courts in Malaysia and elsewhere. Latest is New York's Park Lane hotel.

Since government's finances is in a mess, so claimed Lim Guan Eng and Daim, Mahathir said it is priority to recover the money.

For Jho Low, that is better than being caught by American authorities and get sodomised inside Sing Sing or Alcatraz-like prisons.

The return of Jho Loh to Malaysia would certainly help to uncover the truth. Justice is doubtful because Mahathir is deadset to throw Najib and Dato Dr Ahmad Zahid in prison in order to consolidate his politics.

His political endgame or life could be with the "takeover" UMNO - the party, its seats and assets. 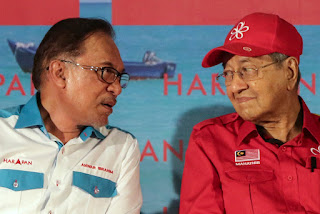 From Mahathir's and his political secretary, the not-so-thinking Abu Bakar Yahya's FB  statements for Malay unity albeit bersatu or Bersatu, one could guess that Mahathir is trying to return back to UMNO in the same manner Semangat 46 returned to the UMNO fold after years in the political wilderness.

His back is being pushed to the wall by DAP. At the same time, Mahathir is losing hope with PPBM itself is in a mess with his bitter quarrel with Muhyiddin. Personalities such as Maszlee, Wan Ji and Syed Saddiq are Amanah and PKR in thinking than PPBM's Malay agenda.

A comment at a recent breaking of fast event was heard to say "dia tidak tahu cari jalan balik" (he could not find his way back).

He need a storyline to justify his return and gain political support for his action.

Mahathir was asked of his power transfer few days ago. His reply was nothing new, but he mentioned not bothered by what people are saying and will decide himself.

YB Abdullah Sani read it as he is looking beyond the two years agreed by Presidential Council with hint of three years using the excuse to resolve debt issue.

Abdullah asked specifically when exactly is the power transfer to Anwar?

The Jho Loh storyline could be part of the work in progress.

Mahathir and PH government could make Jho Loh sing and burden the responsibility of 1MDB on Najib. Jho Loh could then walk away with a slap in the wrist and Najib spent the rest of his life behind bars.

The problem is it will not be convincing. Hear the Bugs Bunny below, who claim to be an economic genius, but is clearly no different than a rat trying to fix a pumpkin.

The whole 1MDB episode is about Jho Low's quick money scheming to embezzle money. It is written in the Whale Book and many more sources.

Whether Najib was in cahoot to plan the embezzlement, it is not clear yet and for due process of the law to determine.

When Najib was told of the RM42 million that originated from SRC money that went into his account, he was upset as he thought he was getting donation from Arabs.

However, Najib did not make a police/MACC report or initiate any legal action yet. His plan was to win the election and pursue it after.

The situation was delicate and the priority was to resolve the financial commitments. He was more concern to save Malaysia's reputation than the politics.

Will having Jho Low back help resolve 1MDB?

There is a video viraling of Najib coming out from a day in court for the 1MDB case and looking calm. It may have been in July.


There are doubts AG Office got their 1MDB case against Najib in order and documentary evidences already available.

There are sceptics questioning as to why after a year only Hamid Bador is talking. To extradite Jho Low, it needs a court judge to find him guilty and AGC only filed a charge in absentia against him few months ago.

Even if there is judgement against Jho Loh, there is still the process of applying to the country for extradition.

Bringing back Jho Loh to strengthen the government's case against Najib on 1MDB will not be so easy as it could make the trial longer.

As more issues raised and evidences uncover, it could strengthen the case against Najib or it could point the finger at Jho Low and absolve Najib. As Najib once hinted, he was cheated and tricked by Jho Low and a coterie of professionals colluding to impress him.

Court cannot be seen only to slap Jho Low's wrist, but is expected to bang his head with a sledgehammer many times over.

Jho Low will not cooperate without a lighter sentence. Prison condition in Malaysia is terrible and facilities below world standard, claimed a Lawyer for Liberty spokesman in BFM.

As it is, public is beginning to grow sympathetic towards Najib and the long list of charges is viewed obviously as revenge and political persecution.

Mahathir is seen back with his old habit to interfere with judicial process with his "man", Tengku Maimon as CJ.

Though her husband's surau friend denied, talk about town is her Seremban-based lawyer husband is a PPBM member or close with Ruslam Kassim and Deputy Minister of Communication and MP of Kuala Pilah, Eddin Syazlee Shith of PPBM.

Mahathir has no interest on 1MDB and it is about himself 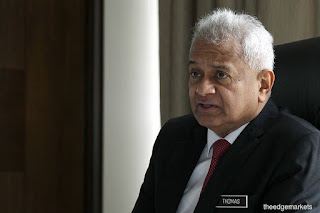 As it is, London court had instructed 1MDB to resort to arbitration for resolution with IPIC than the lawsuit route.

AG said they will appeal the decision. It means the ever inconsistent Tommy Thomas is not in sync with government intention to recoup the money than it is his ego to win court cases that is talking.

It means the London judge is fair and acting on the best interest of both parties towards a resolution than the complex process of finding fault. 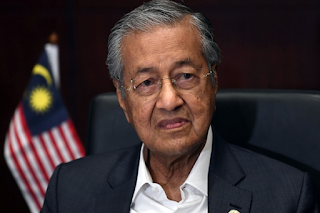 Tommy will only upset Mahathir's storyline. But then again, his political master is Lim Kit Siang and DAP. It could be them countering Mahathir's expected political moves.

Without a resolution to the 1MDB debacle, Mahathir's three long years of campaign against Najib using 1MDB will not convince UMNO members and public that he is right.

He will need to continue to play politics and even one of his propagandist are tired and getting more worried of the economy and the plight of the common folks than politics.

With the chaotic state of economy and government, blame is leveled towards Mahathir. Lim Kit Siang privately blame him for the country's widespread ill, locally and internationally.

Mahathir's replied that he has no say and any Ministerial portfolio. Ministers do not refer to him before making decisions and statements. He openly said of the problem with the incompetent cabinet members.

Daim's open attack on Guan Eng for bad communication is to defend Mahathir. Guan Eng made a mindless response to presume Trump's watchlist of Malaysia for manipulating currency as positive.

Is it a roundabout way of re-igniting the BNM forex losses of the past that is being supected to be an organise embezlement of more than RM30 billion and laundered through Daim's ICBM third world country banking network?

With Daim and Guan Eng open quarrel, including the proxy fight on Telekom's CEO appointment, who is concerned for the economy and the rakyat?

His intention to make statements like not expect government funding to build masjid, do not pressure for Felda Raya money, debt level at 80% need three years to bring to 54%, and defending Russian on MH17 seemed to prepare for future blame toward PH.

It is not about truth or resolution on 1MDB for sake of country, but it is about himself and his family.

From Discover on Google

Whether or not there is any deal between Jho Low and Madey, it doesn't change the fact that PH is crumbling day by day.

With Madey's time and health running out, it seems GE15 is coming faster than we thought

I am not ready to commit to Najib or Rosmah's innocence.

Only as far as the case is going, its not legally proven Najib consented and planned money to be deposited into his account.

As far as 1MDB, I see more the hands of Jho Loh than Najib at work. Legally, can Jho Loh be fairly charged is another ball of wax?

To those claiming Rosmah shd be charged for 1MDB, what power does she command legally?

Other case, I dunno.

Sorry I dont deserve the praises coz I dont agree it is that simple. Read up and investigate before assuming anything.