After Megat got the boot, time for dancing FGV Chairman to ...


There was public outcry on the social media to the video of FGV's Hari Raya gathering and Chairman Dato Wira Azhar Hamid joined dancing to the tune Gloria Gaynor's "I will survive".

The song is appropriate for FGV to inspire its staff after a RM1 billion net loss for FY December 2018 due to impairment and provisions. EBIT for first quaarter 2019 dropped by 19% from RM96 million to RM78 million.

The party-like atmosphere was in bad taste to stakeholders and Felda settlers participating in the various Felda schemes.

The land FGV is planting on are leased land from Felda. Though it does not belongs to the settlers and Felda is a government agency, FGV should take into consideration the sufferings of settlers in the Felda schemes.

The poor results of FGV impacted Felda and the business model of listing FGV to generate revenue to finance social and economic programs are affected.

With Lim Guan Eng's reluctance to allocate funds and resisted signing approved disbursement for Felda, the settlers are financially affected.

The price of oil palm is at the low end and farmers are earning way below RM1,000 a month and as low as monthly wage level of the 1970s.

It may not be fair to Azhar, but the major shareholders of FGV rejected the fees for the Directors.

Azhar was willing to waive his RM600,000 Directos' fees, but request others Directors be paid theirs' totalling RM1.1 million. However, the compromise proposal was still rejected at the meeting.

It is unprecedented in Malaysian corporate history and whether it is fair or not on the Directors, it is irrelevant and hair-splitting compared to the groundbreaking shareholders' activism move.

The important point here is that it is one positive step forward in shareholders activism. It is long overdue for shareholders to make their presence felt and not be "bought" by the generous food and freebies given by management at AGM/EGMs.

It did not involve the retired uncles and aunties yet, but it is hope shareholders will make their presence more and stop allowing themselves being bullied by major shareholders and told to sell their shares if they do not like how the company is run.

It is a mixed signal to re-elect the Directors but not pay them. It does put into question the ability and also the lack of sensitivity of Azhar for putting forward the proposal.

Why did Azhar not talk to the shareholders behind close door, at least the major shareholders before the proposed Directors' fees presented at the AGM?

Azhar said he was "clueless" and did not anticipate it coming. Its quite typical of professional corporate to take things for granted. 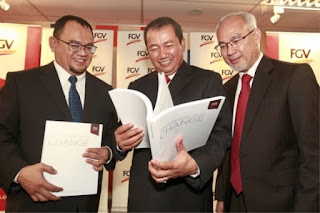 It shows the cut and dry accountant lacked human sensitivity to allow such an ostentatious Hari Raya party and present a proposal for Directors fee at a time the company had lost heavily.

After the message given by shareholders, MR reported him telling reporters, “It seems that all our efforts over the past year are not appreciated. That is our immediate feeling which may be wrong, but that is the feeling.”

He had announced a strategic transformation plan for 2019 and beyond. He announced new CEO and three new top management. There were various initiaves planned and explored such as palm kernel based products, discuss the landlease with Felda, plant 1,400 ha of durian and land located, plug leakages to save RM150 million a year, etc.

Azhar have been doing crisis communication plan to write to its shareholders, explained the transformation plan, promised timely updates, and giving hope the worst has passed, The new CEO had interviews to share his plans, discussed the landlease options, and giving hope 2019 KPI will be achieved.

Shares soared but it is not due to Chairman letter. Words in the market is China investors came in to buy fallen stocks like FGV and Telekom and shorties were given a rude awakening to cause shares to fly.

FGV is still shrouded in negativity from the politically intended White Paper on Felda presented in Parliament to shoot the decisions to list FGV and its investment. Yet the CEO insisted the listing was necessary.

The Edge called the mismanagement of Felda and FGV as the turkey of the year for 2018. It cannot be ignored. Azhar was appointed FGV Chairman on September 2017.

On another serious and matter, management seemed to not be concerned with threat of sanction by RSPO concerning involvement in "alleged forced labour, trafficking in workers, and providing dire living conditions for them, among other widespread illegal wrongdoings" arising from WSJ investigative report in 2015.

PM raised the question where have all the FGV money gone in Parliament. FGV board should have been aware of the scrutiny of both public and political leaders of Felda and FGV before seeking for Directors fee.

In the first place, how could a Directors accept their fees when shareholders are not getting any dividend. That was the position taken by the late Tan Sri Nasruddin Mohamed, former Chairman of MMC and popularly seek to be Directors of PLCs in those days. 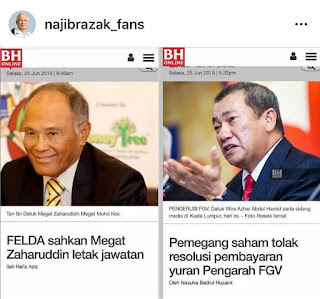 Yesterday's media headline was Tan Sri Megat Zaharuddin resignation which look more like being booted out.

If this blog could have heard of it, do not tell us Azhar was not aware. Why did he insisted in putting forward such proposal as though it is business as usual as per the White Paper conclusion?

Azhar maybe surprise and hand no inklings because the accountant is too dry, obsessed with his so-called principles and lack sensitivity. It is as if he is not living in a world of humans.

A member of PPBM's MPT will not forget his insensitivity at MRT Corporation. Doubt he realised that the PPBM MPT is linked to one of the institutional shareholder that witheld payment for his services. Maybe it is payback time.

Maybe it is not time for the dancing Chairman to leave because he was not responsible for the mess at Felda and FGV caused by Tan Sri Isa Samad. Nevertheless, it is no more about looking at the past.