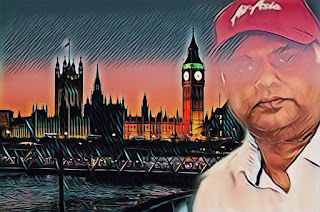 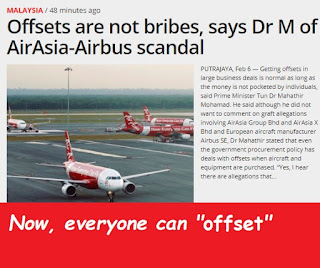 Never mind the probe for corruption and money laundering by authorities of India, the Edge Online reported yesterday that Tan Sri Tony Fernandez and Dato Kamaruddin Meranun names cropped up before in a London court on similar suspicion in 2017.

The reaction and no reaction by Prime Minister, MACC, even AirAsia and National Governance, Integrity and Anti-Corruption Centre (NGIAC) are not dissociating Malaysia and Malaysians from rampant practises of corruption, kickback and bribery.

After losing some RM1.5 billion loss in market capitalisation, the share prices of AirAsia recovered yesterday following statement by Prime Minister, Tun Dr Mahathir who came to the defense of the 11 years in a row for world’s best low cost carrier with the offset line.

However, the diversionary denial is not convincing. Gunasegaran in Focus Malaysia explained offset do not involve cash into private companies or account but are in the form of programs and contributions for benefit of industry and public.

Otherwise, SRC and 1MDB are also offset programs and all charges against Dato Najib should be dropped. 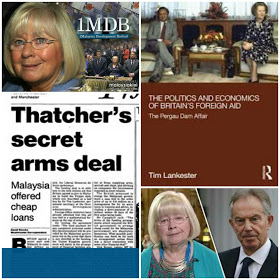 In the UK, Mahathir had a reputation of being reported by media in the 1990s as Mr 10% and the Pergau dam deal remain ettched in public records.

The UK judgement is a criminal prosecution against the company. It could proceed further to investigate and subsequently prosecute individuals worldwide involved in the company, recipients of the bribe and those abetting the crime.

It was reported yesterday that Sri Lanka immediately arrested the airline chief implicated ffor allegedly accepting bribe in the Airbus UK judgement. Malaysia have not acted so. 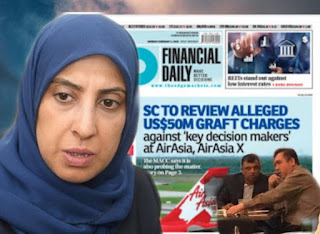 MACC’s Chief Commissioner have been quiet since her last statement over the weekend.

Latheefa Koya, who may be expected to find a way out for her fellow Malaysian Indian but consciously maybe  aware that it warrants an investigation, thus rely on PM to do her follow-up statement. 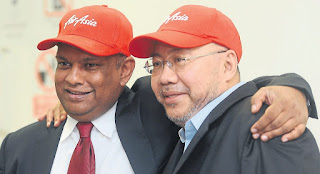 It is commendable for Tony and Kamaruddin to act decisively and immediately withdraw themselves from any executive role for two months. In crisis management, it is textbook public relation and good governance to the Malaysian public to do so.

However, it still fall short and mere pulling wool over the eyes. The two remained majority shareholders and members of the Board of Directors, thus still wielding much power and influence. More so, the inquiry planned to be done by Air Asia remain internal.

Will anyone party within Air Asia dare to incriminate the taukehs, and major shareholders?

With a 54 year old MCE holder and an former ground operation executive, Tharumalingam s/o Kanalingam made acting as CEO, it is fair to presume he will more likely than not, act on instruction and not have the independence to do the inquiry.

The camaraderie between sub-continent rooted Malaysians to cover each other could be quite astounding. 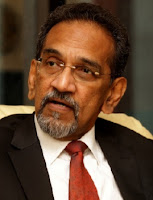 His call is also short on the level of integrity and accountability one could expect from an independent group with no protocol from any formal relationship with authorities abroad.

What’s good for the goose is good for the gander. Devadeson should have questioned as to why no Airbus executive are asked to go on gardening leave pending investigation.

Even after Airbus paid for the US$4 billion fines, no Airbus executive is sacked! Instead of certain party diverting attention to current MCMC Chairman, Al-Ishsal who used to be employed with MAS and subsequently AirAsia, and CEO of Caterham Bikes, no mention was made of Riad Asmat.

Riad is the current AirAsia Group CEO and son of BOD member, Tan Sri Asmat Kamaluddin who was the long serving Chief Secretary to Tan Sri Rafidah Aziz, then serving as Minister for International Trade and now Chairman of the implicated Air Asia X.

He was Group CEO for Caterham F1 for two years until around 2013 or early 2014. He should be watering his garden daily, shouldn’t he?

This issue has enormous implication to this publicly owned company. It is faced with the double wham of an industry in which the Wuhan orginated CoronaVirus has caused Cathay Pacifics asked 27,000 staff to take three weeks unpaid leave. And now the alleged bribery scandal that already affected its market capitalisation.

A market rebound does not erase what was committed. 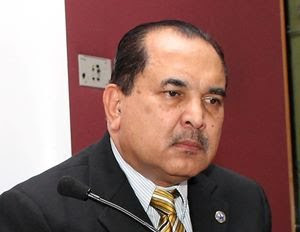 If MACC is what MACC is, where are the past loud voices in the likes of Dato Akhbar Satar, the former Transparency International of Malaysia President?

He was then enthralled with the Corruption Perception Index and used it to the hilt to smear Najib's administration, but recently said not to “syok sangat” with the seemingly favourable CPI 2019 statistics.

Yet, no comment on the more damaging Airbus-Airasia alleged bribery from the man said to be a protege of Tan Sri Abu Kassim Mohamed when working at MACC before pursuing the academic line. 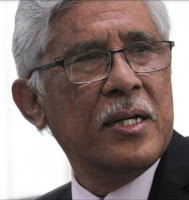 No comment too from the man who is now the Director General for NGIAC.

He claimed the war on corruption is coming together, which is basically the conceptual plan he put together during his hiatus at UiTM, but his proposal was rejected by the University as not feasible.

None of the promises for eradicating corruption in the PH Manifesto was carried out by Abu Kassim.

Someone should dig up on how former SIRIM executive, Nor’afiza Saim was appointed as CEO of Integrity Institute of Malaysia despite being rejected by the Board of Trustee as unqualified for the post.

Abu may have had a hand to place her as his person to replace the earlier CEO, who was his man too and now his Deputy. NGIAC is more concerned to place their people everywhere like any PTD man than seriously addressing governance, integrity and corruption.

By the attitude displayed, the Airbus judgement looks likely to be ignored and Malaysians should not embarass themselves by showing their face in London.
at 2/07/2020 01:21:00 PM