Sack Board members of TH or face backlash from Muslims!

The tenure of the full Board of Directors (BoD) of Lembaga Tabung Haji (TH) is due to expire any day now.

If Tan Sri Muhyiddin Yassin intend to stay long as PM, he should override the Minister in the PM Department in charge of Islamic Affair and sack the the whole evil lot of the BOD, especially Dato Zaiton binti  Hassan.

Subsequently, he should establish a Royal Commission of Inquiry (RCI) with the objective of investigating and charging all of the perpatrators in court for criminal offenses.

Ignoring this warning will result in backlash and anger from the Muslim community once the whole truth is known.

They manipulated, create falsehoods and slander those intent to reduce TH to merely a travel agent and deposit taking and staff to be salesman for Bank Islam products!

The Wahabi Dr Zulkifli Mohamad al Bakri should be sternly warned by Muhyiddin not to interfere and engage the BOD of TH to whiten the evil lots.

In the past and present, Dr Zul has habitually provide cover for religious wrongdoings, deviants and anti-Islamic movements by disrupting investigations and actions through engagement with these perpetrators.

It gave them space to be left unhindered from action to continue their ill intentions against established Islamic practises and institutions.

The 9 membered BOD is led by Chairman Tan Sri Md Nor Yusof who is Chairman of Malaysia Airlines.

It is hardly any secret that the former Bank of Commerce banker is Tun Daim Zainuddin man and was appointed at the request of Council of Emminent Persons (CEP), in which Tan Sri Dr Zeti Akhtar Aziz is a member.

The former banker played a significant role in the clearance sales of TH assets and at Daim's instruction, sytematically made TH operationally redundant by putting a full stop to all investment activities.

Mohd Nor was responsible for the scripted lies and slanders concoted for PH to use against former BN government and previous management.

He created fear to result in a bank run among depositers to ensure they withdraw from TH and place money with Bank Islam.

To cover themselves in the future, they did not reinstate the suspended management but instead brought people from MAS to head finance.

Mohd Nor failed in his turnaround of MAS. Does he expect MAS staff able to turnaround the financial affair of TH?

The person instrumental in getting BIMB staff to dominate all levels of TH and despite not familiar with Haj Operation, insisted to be send for duty to Mekah for Haj last few years is former BIMB Director and TH Drector, Datuk Zaiton Mohd Hassan.

Zaiton should be considered as “tali barut” to Lim Guan Eng to help destroy TH.

“Tali barut” is a Malay derogatory term to describe perpetrators covorting with communist enemies to result in the atrocities on and death to Malays during Bintang Tiga occupation of Malaya after the end of World War II.

For her services, Zaiton was rewarded with an RM800,0000 a year package to be Chairman of Bank Pembangunan.

Instead of turning around the Bank, as usual she is busy  with organisational politics and witch hunting as she had done at TH. The Edge repeatedly wrote of her failure to bring about any turnaround at the Bank.

Any claim on achievement will be mere window dressing. Tengku Zafrol or the Minister responsible should sack her from the Bank!

Together with Mohd Nor, Zaiton played a leading role in concocting lies and slander towards BN government and cheap sales of TH asset.

And, she was personally responsible for TH losing RM50 million for subscribing in bonds issued by her former Maybank collegue company, Offshore Works Sdn Bhd.

She played a role in the orgination of the bond through her private consultancy practise.

As member of the BOD of Bank Islam, it was clear cut conflict of interest and abuse of power. But BNM covered for her.

Zaiton played a role to end the cooperation between TH and Sultan Pahang in plantation. She is believed to have given wrongful information to Sarawak Report. It tarnished the good name of DYMM Yang Dipertuan Agong.

She lied, slandered and cruelly fixed six top management of TH with false allegation in their police report with intention to replace them.

Police found no wrongdoings done and yet all have not been reinstated to their previous positions.

Till today, the current management has yet to sort out the 2018 accounts to meet the wishful accounting standard and approved by Auditor General to be in compliance with the governing Act of TH.

The public were being duped by then opposition and opposition sympathiser in the mass media who created the impression there were massive wrongdoings in Lembaga Tabung Haji.

The convenient political targeted former Chairman, Dato Azeez Rahim and former CEO Tan Sri Ismee Ismail has yet to be charged for any wrongdoings.

Not even any remand order by police or MACC.

Till today, all of Zaiton's concocted lies have NOT been proven true. All!

Basheer is said to be Tun’s adopted son and had interfered in the affairs of TH subsidiaries.

Mujahid-appointee Prof Dr Ashraf Md Hashim played a role to change the basis of TH savings account from Wadiah Yad-Dhamanah to Wakalah as the step to remove guarantee from the savings deposit.

Azmin-appointee,  Datuk Noordin Sulaiman is a weak and hopeless members of the BOD members.

He merely follow the crowd and easily influenced by the other politically motivated BOD members. Sack him too!

He carried out Zaiton’s agenda to cut TH role to size by cutting Haj subsidy and increase cost of Haj to unaffordable level. He approved the closure of 16 branches .

Where Zaiton and BNM once claimed TH misuse reserve to pay hibah, he had done the same recently. He used “haram” source of money to distribute food  to frontliners during the pandemic recently.

He allegedly collaborated with Zaiton to tarnish the good name of YDP Agong.

Before joining TH, he was vocal in attacking previous management and BOD, and openly support for Zaiton on his FB. These days he evade to answer questions posed against him for the non-conforming practises on his FB.

His wrongdoings are known within TH. He camouflage by spending a lot of time sermonising and spinning Quranic verses to inspire, them but actually he is guilty conscious for hypocritically breaking the laws he accused previous management of committing! 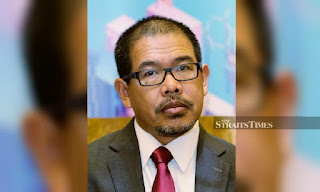 The wrongdoings of the past have been expensively written elsewhere and it will be briefly touch in the list.

However, the current management led by accountant Dato Nik Hasyudeen Yusof continued to infringe on the established policies, accounting policies and governing act.

Their wrongdoings are enlisted below in no particular order:


1. Appointment of Chief Strategy and Chief of Staff did not go through the correct process.

2. Appointment of external consultant i.e. Ernst & Young, Public Relation Consultant, did not through the correct process

4. Abolishment of investment committee resulting in abuse of power by the BOD.

5. Creation of jobs/ post to cater for their crony resulting in duplication of work

6. No new investment resulting in no new income

7. Closure of TH branches to cut cost resulting in lost of jobs for the staff

10. Propose abolishment of Haj subsidy as per approval by previous BOD and cabinet

11. Witch hunting as proven framm the suspension of old members of magament up till todate

12. Proposing to abolish the government guarantee with the changes of Wadiah Yadhaman to Wakala

13. Recruitment of many high ranking staff which is in duplicate to the current staff strength

14. Board of Directors minutes only show decision and not the deliberation. It is an attempt to hide wrongdoings

15. Suspension of scholarships for TH staff and depositors

17. Amending the authority limit to cater for the new management own needs

18. Turning TH to operate and be  like a bank

19. Denying the TH staff from performing their Haj duty and instead offering to Bank Islam staff

20. CEO offfice is treated as a private office instead of a public office to serve the public as phone calls, emails are not attended to

21. Certain BOD members have authority over other BOD members with the case in point: Zaiton

22. Constructive dismissal in play for the old management as they are suspended for an unspecified duration.

23. The staff are blackmail to the core and they are afraid to voice out their grievances

24. Instructions given are to be adhered and cant be questioned

26. Putting certain Director(s) in control of (power on) everything, no separation of duties between Management and BOD.

27. Abuse usage of media and Public Relation Consultant to throw a bad light on previous TH BOD and Management

28. New Management did not follow proper procedures in the police report resulted in no natural justice given to the staff affected.

30. Appointment of cronies as staff without proper process and proper justification on the creation of the position, many redundant positions being created which is a waste of TH hard earned income

31. Issuing dividend from unrealised Sukuk profit which may not materialised in the future and subjected TH to great loss later.

32. No proper valuation done on the transfer of assets which has being highlighted by Auditor General in the 2018 Audit Report

33. TH Plantation issues of manipulating the valuation report by Government Valuers and forcing the assets to be sold at lower than the government valuation.

34. The new Management and BOD failed to carry out their fiduciary duties to generate income for TH,  but instead time spent for witch hunting resulted in no new investment pipeline for future income

35. Sukuk created to camouflage their incompetencies in managing the funds and simply do a window dressing exercise of which it is not a real solution for TH, but merely transferring the problems into another government entity.

It is not a long term solution and they have not really saved or clean TH, but merely sweeping the issues to another entity for temporary basis . Should UJSB failed to create value on the assets transferred, UJSB will not be able to pay TH and TH will suffer bigger loss.

36. No fit and proper justification to appointments...

Zaiton used to promote TH Offshore sukuk and resulted in TH loss of RM40m, BIMB loss of RM50m yet she still be appointed as member of the Board of Directors of TH

37. Mohd Nor failed in his two entities, which he was the chairman i.e. MAS and Khazanah yet Tun still appoint him as Chairman for TH.

There are still more. The most explosive is to come.

Social media made issue over Chinese CEO of Prokhas. His race was an irrelevant.

There is a person appointed to manage TH asset is under MACC investigation. It is suspected that Mujahid made the appointment to save him or her from being charged.

With a crook being given position, he or she will carry out any instruction given, even how destructive the action may result to the organisation in order to save themselves.

There is a long list of chargeable wrongdoings, Muhyiddin must act without fear or political favour.

NO COVER-UP for his past association and likely collaboration with these pencuri, perompak, penyamun and penyangak!!!
at 7/09/2020 10:44:00 AM

Most depositors do not care who manage TH as long as they get good dividend. What they do not like is appointing politicians who know nothing about running a holding or investment company. So let it be sack them if they do not perform not when they is a change in government. I have no problem if you or anybody want to run TH as long as we have good dividend in return.

Oh my God. The trust Muslims had for TH has been eroded. The greed is uncontollable.

Pity for the B40 for trying to save s few ringgits per month to enable them to perform the Haj.

We are at the end of time.