Post-Pandemic: Important leaders still not get it yet 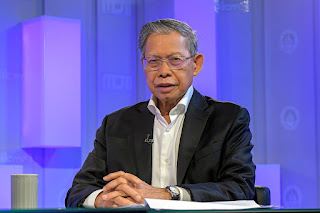 The day earlier the press was elated when he mentioned one. For few weeks, local cases of Corona Covid 19 virus infection have been on the minimal, and most are imported and involved foreigners.

The Sultan of Selangor announced masjid can conduct Aidil Adha prayers. These developments are indicating the worse is over.

Many felt the aftermath of the pandemic within weeks of the MCO but generally most will only come to term with it now.

It is time to face the task of handling the economic fallout that is being felt globally and restart the economy devastated by the sudden shrinkage in economic activity.

Malaysia have faced many economic crisis before, but the experience of the past may not be relevant today. Methodology need to change with the transformed social, economic and political senario.

The Star dated March 30th quoted 70 year old Dato Mustapha Mohamed, newly appointed Minister in the Prime Minister's Department in charge of economic planning claimed at least six months is needed for economy to recover and it is on condition of right strategy.

He said in a TV interview that tourism will be severely affected and effort is needed to intensify promotional effort.

SME is beyond government affordability to help all.

To claim six months is needed, it means 70 year old Mustapha doesn't get it.

Within two weeks of MCO, an informed and knowledgeable person expressed financial concern on the possibility government machinery could begin to fall apart.

70 year old Mustapha view was a predictable template. More so, he returned to a position he once held.

Kamal was being diplomatic and doing PR to safeguard his business interest. He was a partner to the controversial former Economic Adviser to former PM Tun Dr Mahathir, Dr Muhammad Khalid.

Tengku Zafrol's experiance was as banker. A job hopper from one corporate job to another need familiarisation with public policies. Now his new job require him to be critical of bankers and their lackadaisical attitude towards public interest and welfare.

If Kamal Salid bother to do background search, Azmin's degree is in Economics, but his Masters was education. His first and only job experience was several months as MRSM Terendak teacher. His real experience is politics and skillset is only political manovering.

As for 70 year-old Mustapha, his March 30th statement indicate he is out of touch with the times. He seemed unable to understand and gauge the impact of the pandemic Corona Covid 19.

Like most playsafe civil servants, he need a directive for him to "saya yang menurut perintah" instead of preempting measures.

Heath concern not over

The virus is still not well understood yet.

Contrary to claims by POTUS Donald Trump or other reports that certain countries found a vaccine, the testing may require few more years, and it is often for new vaccine to fail outside lab condition during testing.

In short, vaccine is still not available or other word, cure is not found.

Malaysians are elated and proud that our frontliner have address the pandemic well and with worldly acclaim.

A comforting high percentage part of the infected ones recovered. However, the recovery is still a trial-and-error effort and it was sheer luck.

As told by one frontliner involved, the recovery does not mean the virus have been eliminated from the body.

Few weeks back, Beijing had a second resurgence scare. That led to a Monday 50 point drop on Bursa Malaysia.

The risk will always be there. It means life will not the same anymore. Human behaviour will be completely transformed by the change in daily human activity.

It means the already drastically changed economic activity at the micro level will structurally change at macro level.

When 70-year old Mustapha recently said to The Star that tourism sector will receive the much-needed boost once Malaysia and Singapore open borders, many commentators privately texted to say Tok Pa still does not get it.

He lacks imagination and missed the time tunnel or Delorean car trip "back to future" (i.e. the present and future).

There will be hardly any unpurposeful, unnecessary and leisure travel any more for many years to come.

Travelling will be only limited to domestic and nearby destination. No promotion can make people do long flights to see places for Puan Sris and Mak Datins to gloat to their gawking friends and underlings.

There must be genuine need for travelling because health risk of the destination will be high on the consideration to travel.

On the other side, there is also the risk of destined country may not accept traveler from certain origin as happen to Americans wishing to crossover to the Canadian side of Niagara Falls.

Travel bubble still has health risk attached and will not work.

The usual tourism activities for rich and famous to shop for Louis Vuitton at Rodeo Drive and the not so affluent could be there to gawk will be a thing of the past.

Activities of low priority will not attract the interest it once enjoyed.

The excesses of the past will not be as exciting anymore.

The pandemic have suddenly forced people to do self reflection and become more spiritual.

The moral dilemma in the seemingly inhumane actions taken during the stress of making decisions during the crisis are being discussed and reflected on.

John Authers, a business writer on financial markets, wrote an opinion piece in Bloomberg exploring morality and ethics with profound questions below:


What is right and what is wrong? What can individuals expect from society, and what can society expect of them? Should others make sacrifices for me, and vice versa? Is it just to set economic limits to fighting a deadly disease?

Deep questions are being asked on human existence. The pandemic made significant Muslims in Malaysia come to the realisation that God could merely send air and the world could be in absolute disarray.

For the benefit of 70-year old Mustapha, this is not a new normal situation but abnormal and unprecedented.

It require deeper thoughts and not merely relying on doing copycat work from the effort and experience of others. The way of travelling abroad and selective copycat of business ideas are over.

In the past, such development approach failed over time because it is not wholesome adoption of the positive attributes in work ethics, culture and the yearning for knowledge.

It was Mahathir's money-in-a-hurry culture and be done with what to happen in the future.

Economic planning will not be the way 70-year old Mustapha is comfortable with and as the world is not as he believe. He cannot plan and impose on the lesser ones to carryout and do.

The time could be over for top down planning. One has to listen to the people on the ground to identify problems and solution, opportunities and reduce wasted efforts.

Putrajaya will think it is necessary to save the hotels and low cost hotels. It is half bake and not thought through. Low cost hotels have never been of economic value creation, but mostly money laundering centres.

Bureacrats at the state capital may think reopening the duty free centre up north will help local traders. Without the Thai to sell cheap quality goods, it will only be a centre free from visitors.

The way forward need us to ask questions, think, and plan seriously. The country's interest must not be deviated away by politics, self serving businessmen, and glory seekers.

The strategic way forward for the country does not lies in the politically advantageous positions in finance, trade, home security, rural development and education, but higher education.

We must think and do ourself. Stop looking abroad but within us. Copycat is only simplistic way out.

By genuine brain power, it may not be in the manner most male Professors and Phd doctorates pursuing positions to be VCs, Deans, Professors, and Head of Departments.

Such position are not meritorious, but attained by political alignment with activist groups like IKRAM or organisational politics to bodek and ampu politicians.

Tourism is only a small area, but it highlights the message that 70 year old Mustapha conventional ways of thinking is not the way forward.

The already 40 year old Gen Y too may now fell to stereotyped thinking.

Other countries of lesser being than Malaysia in the past are fast grabbing opportunities, but people upstairs are too slow, too old and too late to react.

What do you expect from Mustapha who is a well known Mahathir disciple..

Why the need to reference the Minister's age as a prelude to his name everytime?

Why is Malaysia's relative success as a direct result of superb management by the PN government referred to as "lucky"?

Just give credit to the government where credit is due.

Stop sounding so vindictive and spiteful towards this government and it's Ministers.

1. Victoria's Secret declared bankruptcy.
2. Zara closed 1,200 stores.
3. La Chapelle withdraws 4391 stores.
4. Chanel was discontinued.
5.Hermes is discontinued.
6. Patek Philippe discontinued production.
7. Rolex discontinued production.
8. The world's luxury industry has ceased production.
9. Nike has a total of $23 billion US dollars preparing for the second stage of layoffs.
10. Needless to say about the travel.
11. The founder of AirBnb said that because of pandemic, 12 years of efforts were destroyed in 6 weeks.
12. Even the Starbucks also announced to permanently close their 400 stores.

Under the weight of the new crown pandemic, many giants are facing the crisis of failure. Five months of pandemic were in debt, and tens of thousands of companies went bankrupt, so the company was seriously replaced.

If your company is still there, and there are no pay cuts or layoffs, please treat your company well. Because they still insist on carrying all the tests that you can't see. And humans are facing the pandemic that cannot be controlled. The second half of 2020, is the challenge of corporate strength.