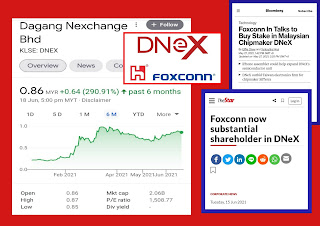 DNeX was notified by the acquisition of 120 million shares representing 5.03% by Foxconn on June 13. Malaysia Reserve reported original partner of DNeX, Azman Karim sold his remaining 5% interest was among the few shareholders selling out.
The talk of Foxconn buying into DNeX leaked into mainstream and foreign media on May 27th. By June 15th, media reported Foxconn Singapore, a subsidiary of Hon Hai or better known as Taiwanese MNC in electronic manufacturer, Foxconn buying 5%.
On the same day, Managing Director, recently Tan Sri Syed Zainal Syed Mohd Tahir reacted positively to the announcement. To those with the view Khazanah should have sold Silterra to Foxconn for better money, Syed Zainal's reaction gave the perception it was a pre-planned entry.
DNeX share price spiked up in February following the takeover of Silterra from Khazanah. Presumably, Foxconn "collected" throughout March and into May.
The controversial Foxconn was out of the first round bid as public pressure demanded Khazanah to keep it within local hands.
DNeX collaborated with Silterra to develop a turnaround plan for more than a year before Khazanah changed policy for an open bid. Expectedly DNeX had a more credible and genuine business plan to come out as winner.
The emergence of Foxconn as a mere 5% shareholder is substantial given the company's well spread out shareholdings. 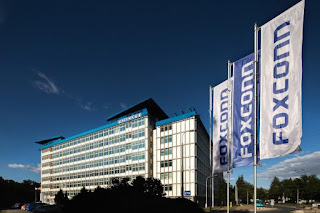 It attracted rumour that Foxconn will eventually buy directly into Silterra and finally get what they wanted in the first place albeit cheaper.
DNeX received approval from shareholders for private placement of 30% of its paid-up capital. Will substantial individual shareholder, Zainal Abidin Jalil take it up or it is placed out to Foxconn?
There have been rumourmongers suspecting that the China company partnering DNeX that bought Silterra could likely be Foxconn's China front. Foxconn has an operation in China to produce Apple handphone.
Whether there is truth into it, time will tell whether the China partner could work with a DNeX with politically sensitive Taiwanese as substantial shareholder. If the China partner pull out and Silterrra shares is taken over by Foxconn, that would be the confirmation.
The Taiwanese MNC can afford to not only takeover Silterra on their own, but DNeX as well.
There were talk Tun Dr Mahathir as second time Prime Minister invited Foxconn to develop the Malaysian telco sector. Initial conversation fell through following Foxconn insistence on a certain social CSR condition that does not appeal to a Mahathir against anything free for rakyat.
The earlier talk was Beijing Integrated Circuit Advanced Manufacturing and High-End Equipment Equity Investment Fund Center (Limited Partnership) is partnering DNeX to pursue into businesses for their manufactured wafer such as solar energy.
Foxconn can do solar, and also electric car and other areas of collaboration. They are going into electric vehicle platform in Thailand and targeting 10% global shares in EV components. To quote from Edge Online report:

“We foresee that this latest development can bring great potential to DNeX and we believe Foxconn’s entry can offer opportunities to unlock and create value across the high-technology sector's value chain and beyond,” he said in a statement today.
Syed Zainal Abidin said potential areas for collaboration between DNeX and Foxconn are semiconductor and downstream products, electric vehicles (EVs) and businesses related to the EV value chain.

The belief out there remained on Foxconn as more interested in Silterra than other businesses of DNeX. In April, Foxconn was reported in talk of buying a chip manufacturer in Taiwan. The latest Edge weekly reported: 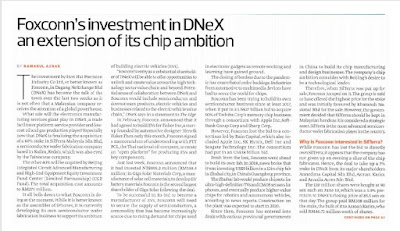 It means there is greater potential for Silterra than only solar panels and lower end wafer, but possibly upgrading capacity and tecchnology.
Syed Zainal's reaction could be diplomatic corporate language to hide the possiblity for future hostile takeover.
A company with market capitalisation of USD 55 billion and global reach do not go into acquisitions randomly for quick capital gain in share price. They may have done their due diligence and it is indicative that DNeX is a worthy investment overall.
The value for DNeX is not only for getting Silterra at a bargain and Khazanah became a recepient of Dato Najib's critic for selling below its potential value and the amount government pumped money to revives it.
Najib should lay the blame on the politician-led and accountant and banker filled Board of Directors. Though its off his hands, he could also admit it was a mistake to stock up Khazanah human resource with unproductive accountants and bankers with narrow and myopic mindset for cutting cost and immediate cashflow.
(Take note: This blog have been advocating for decades that the country need more technicians than number crunchers and paper shufflers) 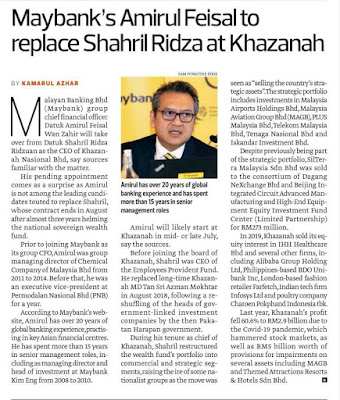 Apparently the new Khazanah CEO is also a banker.
On the other hand, Foxconn may have confidence in the new and professional team led Syed Zainal. His decades of experience in the automotive sector will compliment Foxconn future plan.
Syed Zainal and shareholder Zainal Jalil are engineers with the better perspective to identify diamond in the rough.
Its idealistic shareholding spread and corporate governance ensure it is professionally run.
Whether Foxconn see potential growth in DNeX other segments of trade facilitation, System Integration & consultancy, energy, telco and technology, it depends on the synergy.
Having them on board will strengthen DNeX to leverage in turning around Silterra, and in turn adding further value to Foxconn's acquisition. The areas for collaboration is there and for real.
Buy DNeX for the potential from Foxconn future positive collaboration or potential hostile takeover play.
A higher price could also make it expensive for Foxconn to do hostile takeover. It will ensure Silterra remains in local hands.
at 6/21/2021 08:27:00 AM