No provision for hybrid Parliament 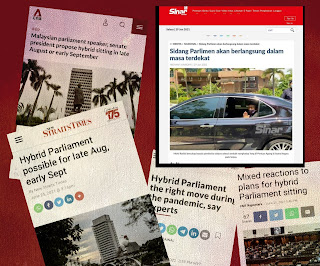 It must either be the Speakers or Minister in the Prime Minister's Department in charge of Parliament that mooted the idea of emulating hybrid parliament in the UK.
Any political sceptics could see it is part of the repertoire of excuses by government of Tan Sri Mahiaddin Yassin (then Tan Sri Muhyiddin Yassin) to prevent Parliament from seating.
The MPs were among the earlier batch of Malaysian getting Pfizer vaccines. There was no cluster arising from the last seating with Covid 19 SOP adhered. No reason whatsoever for Parliament not to convene immediately, but obviously intended to stifle democrasy.
Should Parliament sit, hybrid Parliament of limited physical presence and online is, but an excuse to  curb debate or questions in the manner the hours were held to minimum in the last seating.
Hybrid idea was tossed up prior to the recent Special Meeting of Malay Rulers which called for immediate convening of Parliament.
Sorry, nice try. Its not constitutional.
In a Whasapp conversation with Minister and seasoned Parliamentarian from Santubong, Dato Wan Junaidi, he shared his view on the and consented it to be shared in its entirety (no editing).
His views below:

“Let me start with history. When the Bangunan Parliament was officially opened on the 2 November, 1963 to be used as a Permanent Sitting Place for Parliament Malaysia, and the YDP Agong declared that all Parliament sitting would be done in that building. The building became a Permanent Sitting place for Dewan Rakyat & Dewan Negara. The Houses of Dewan Rakyat & Dewan Negara referred to in the Houses of Parliament (Privileges & Powers) Act 1952 Revised 1988 is also the Chambers of the Dewan Rakyat and Dewan Negara in that Parliament Building referred to by the YDP Agong on the 2 Nov., 1963.
Article 62(5) of the Federal Constitution dictates that member could only vote if he is in the House. Not even at the lobby, library or lounge of the members but in the House. That is present practice; member must be in the meeting chamber of Dewan Rakyat to cast his vote.
The same Chamber as the House of Dewan Rakyat under Article 62(5) I mentioned above... that vote could only be made in the House in the meeting Chamber of Dewan Rakyat in Parliament building.
Now look at the Standing Orders & Rules of Dewan Rakyat, almost all interaction between the members and the Yang Dipertua Dewan says; stand by his seat to speak, to ask question and to intervene.
Tell me how to overcome all these legal and procedural problems.
The Standing Orders & Rules of Dewan Rakyat was drafted and enforced in 1959 and technology was not there yet. Virtual sitting is not provided for in the Rules.
Not only the speaker has the problem with the question time, the debates and resolution but he will have the major problem with enforcing of the discipline and rules of the House. Yet Article 62 generally provided as saving to irregularity and yet could not be literally be enforced because of the term of the House means the Chamber of Dewan Rakyat in Parliament Building.
I’ve two or three discussions with the Speaker and other MPs with law background in 2019 about virtual meeting, the constitutional problems, the Orders & Rules and the disciplines of members. So, we all decided that unless the constitution and the Standing Orders & Rules are amended, sitting of Parliament simply could not be made virtually.
On the other aspect, once Parliament sit, all the ordinances promulgated by the YDP Agong have got to be tabled, debated and passed by Parliament before they could be enforced again. Once the Bills are tabled in Parliament their enforcement would be suspended Article 150(3) of the Constitution and could you imagine it enormous implication to the government actions to handle the covid19 problems now!!
Remember that sitting of Parliament could not be equate with any ordinary meeting, including a Cabinet Meeting that could be organised any how and any where. But Parliament meeting is highly regulated and must be on its own term that what the right to regulate its own internal affairs under article 62 and 63 mean. Beside the Constitution, there is the Rules of the House, the Conventions and Usage to be adhered to.
Though there are saving in the constitution about irregularity, but Parliament could not blatantly ignore the obvious contravention of the constitution, the orders and rules of the House, Just to satisfied the political demands. That was the reason why have always insisted to introduce the new laws snd overhaul the standing orders & rules of the House to overcome current problems and to be ready with the future possibilities of problems.”

Words from the palace following Speakers from both Houses being summoned this morning is as follows: 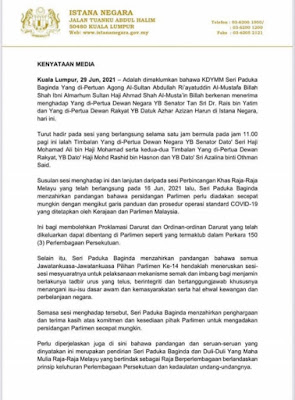 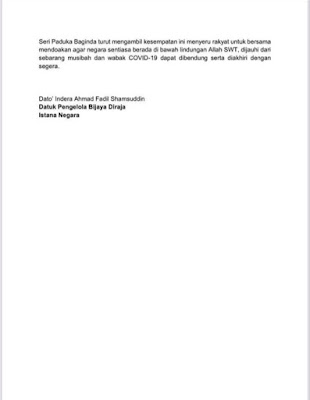 There is a public petition organised by YB Tengku Tan Sri Razaleigh Hamzah to call for Parliament to convene immediately. See here
A proper Parliamentary session has to convene soon. Not September, not October and not hybrid Parliament, but a constitutionally adhered seating in the proper Dewan.
at 6/29/2021 04:20:00 PM