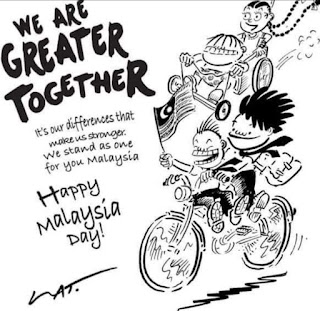 Wishing all Selamat Hari Malaysia in the spirit of the new national tagline Malaysian Family.

The current economic, political and social development seemed to be leading UMNO as well as PPBM and PAS to the inevitable.

Though there is a political truce for at least a year to enable Malaysia to get out of the triple crisis of health, economics and politics, MOU is not an iron clad agreement.

Only time can tell.

Political pundits is predicting the horizon is not too far away. Perhaps, it is before the return of His Majesty Agong from his overseas trip. Or just after.

In the meanwhile, the mounting worry is Malaysia has all the elements and ripe for the picking.

Its strategic value makes it attractive.  While its weakening leadership and almost all aspects of nationhood is increasingly vulnerable. Will not elaborate any further but leave it for all to ponder.

The pessimistic mood during the celebration of the nation's momentous occassion makes it necessary to reflect back to a version of history that led to Malaysia's formation.

It is with the hope to seek for that something from the past to understand the present and sustain the country to the future.

The reasons for Malaysia’s formation

©The Sun (Used by permission)

The era of Tun Hussein Onn, who succeeded Tun Abdul Razak as premier, was the period of consolidation. The foundation for social restructuring had been set in place, and the momentum for implementation was accelerated.

TUNKU Abdul Rahman’s claims to greatness rest not only on his being the founding father of Malaya’s independence, but also on his being the architect of Malaysia comprising Malaya (a federation of 11 states), Singapore, Sarawak and North Borneo (later re–named Sabah).

“Malaysia Day” or “Independence Day” is celebrated on Aug 31 and not on Sept 16 because Malaysia’s inauguration was initially set for Aug 31, 1963, the anniversary of the Federation of Malaya’s independence.

But it was postponed to coincide with the announcement of the findings of a United Nations–conducted survey on whether the peoples of Sarawak and North Borneo wished to join Malaysia. The results were positive.

There are several reasons for Malaysia’s formation. But the most important from the Tunku’s viewpoint was ethnic composition.

The Tunku dropped his opposition to the proposed merger with predominantly Chinese Singapore only after the British assured him that the three Borneo territories of Brunei, Sarawak and North Borneo could join Malaysia.

In the 1957 Census for Malaya, the racial balance was fairly equal between the Malays and the “non–Malays”. But in the enlarged federation of Malaysia, the Malays and “natives” of Brunei, Sarawak and North Borneo would slightly outnumber the Chinese, Indians and “other non–Malays”.

In his memoirs, Singapore’s Lee Kuan Yew said that to the Tunku, “the Federation was anxious not to upset its own racial balance”, and the addition of 1.3 million Chinese from the island “would confuse Malayans and ruin the calm atmosphere there”.

Lee, however, needed the merger because the communists were creating problems for his ruling People’s Action Party (PAP) in Singapore, and he wanted the Tunku to take over responsibility for the island’s security. Lee did not want independence from Britain because “an independent Singapore meant a communist Singapore”.

Likewise, the British was also not keen to grant Singapore independence for fear of the communists’ growing power on the island. But the colonial government was willing to allow the Tunku to take overall responsibility for Singapore’s security within Malaysia.

These three parties, for their own reasons, found it beneficial to negotiate and work out the terms for Malaysia’s formation.

Critics of the Malaysia Plan, including Indonesia’s President Sukarno, called it a “neo–colonial plot”, arguing it was part of Britain’s “Grand Design” to decolonise the region but to exert influence by still having military bases and influence in these territories.

The “Grand Design” notwithstanding, the Tunku’s role was crucial when on May 27, 1961, at a Foreign Correspondents Association’s luncheon meeting in Singapore, he made the historic announcement of the possibility of bringing the territories of Singapore, North Borneo, Sarawak, and Brunei and the Federation of Malaya “closer together in political and economic cooperation”.

Besides Indonesia, the Philippines had opposed the concept of Malaysia from the outset, owing to its unresolved claim over North Borneo. The Tunku would later attempt to mollify both his neighbours by suggesting, in a Manila summit, the formation of a super–federation known as “Ma–phil–indo”, incorporating Malaysia, the Philippines and Indonesia, but they were not entirely assuaged.

What followed from the Tunku’s 1961 announcement were complicated negotiations of the terms by which Singapore would merge with the Malayan federation as well as the intricate manoeuvrings by which the Borneo territories were cajoled into joining Malaysia.

Initially, the political and community leaders of Sarawak and North Borneo were opposed to Malaysia.

They preferred to seek independence first in each of their respective territories, and then form a federation of North Borneo states. But many were eventually won over by the convincing arguments of Malayan and Singaporean leaders as to the benefits of Malaysia.

In the wake of Tunku’s proposal, however, communal–based parties emerged, each seeking to protect the interests of their respective communities.

Later in 1961, the Tunku announced that Singapore would be given autonomy in education and labour, and both the Federation and Singapore would work out common market and other financial arrangements.

Unlike Singapore, which was allotted 15 seats in the Malaysian Parliament, Sarawak and North Borneo, despite their smaller populations, were given over–representation in Parliament: 24 seats for North Borneo, and 16 for Sarawak.

The Malaysia that came into being on Sept 16, 1963 was a federation of many parts; a remarkable act of political consolidation.

But the political, economic and ethnic differences that the new state had to pull together and accommodate posed fundamental challenges to its aspirations to become a nation state.

Dr Cheah Boon Kheng is a retired professor of history of Universiti Sains Malaysia in Penang.