Still in hot soup for false and misleading report to the UK's Financial Reporting Council in the Carillion affair, KPMG came to a settlement on the 1MDB civil lawsuit against them and the 44 partners.
1MDB sued KPMG and the partners for US$5.64 billion. The latest news reported they came to a settlement with 1MDB at US$80 million equivalent to RM333 million.
Ministry of Finance issued a media statement yesterday, as follows: 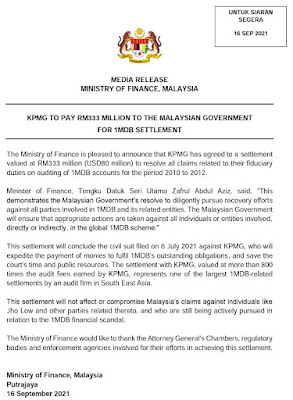 Back in July, Reuters reported KPMG denied the alleged breaches and negligent.
In an e-mail then, KPMG said, "All allegations as reported in the news are refuted and the claim will be vigorously contested."
Now that they have thrown the towel to agree to pay, will Securities Commission's Audit Oversight Board act to this admittance of guilt?
Will AOB investigate and act against KPMG in the same manner they acted firmly against audit firm, Afrizan Tarmili Khairul Azhar (AFTAAS) for non-compliance?
In court, SC is appealing to the High Court for granting the judicial review application by AFTAAS in August last year. AFTAAS countersued AOB for RM35 million.
SC, Bursa Malaysia, Minority Shareholders Watchdog Group and other professional advocate groups had been leaning against Serba Dinamik Berhad to seemingly favour KPMG.
Will there be a change in attitude on the issue raised by KPMG against Serbadk towards a more fair and objective assessment in view of another indiscretion by KPMG globally?
Bear in mind that one of KPMG partner sued by 1MDB is a former independent Director and former Chairman of Audit Committee of Serbadk whose also facing investigation for criminal intimidation made against CEO Dato Seri Abdul Karim Abdullah.
KPMG had picked up on few pecularities of Serbadk account but without due process, made serious allegations against Serbadk in reports made to Bursa and police which got leaked to the market.
It resulted in RM4.5 billion of Serbadk's market capitalisation wiped out with suspiciously strange portfolio adjustment by EPF and KWAP.
When 1MDB announced its lawsuit of KPMG, MP for Damansara Utara, Tony Pua called for government to withdraw audit work given to the firm.
Bloggers had called on Petronas to terminate KPMG but there is no basis to do so then. KPMG claimed to have cautioned 1MDB management.
Now that they admitted to the alleged breach and negligent, there is basis for Petronas, other GLCs, state and federal government to firmly consider terminating the firm whose integrity is deemed questionable.
Give local audit firm a chance. Big four proved to be not of higher integrity.
at 9/17/2021 12:51:00 PM