Keeping faith and resigning to fate 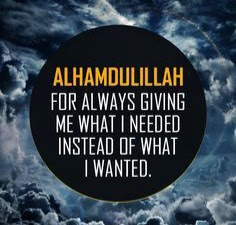 Decades back, your truly was on the verge of then life's greatest pullback.
It was worrying to see series of efforts and small step gains in achievement at school, University, job and self employment was on the verge of crumbling.
Similar to observation of Malay corporate big names resorting to sufism to seek spiritual comfort in the face of challenges arising from financial crisis, yours truly seeked Allah for a miracle to avert our insignificant problems.
The tumoultous times ensued and events unfold according to fitrah (normal occurences). God did not gave us what we wanted. Instead God gave us what we needed most .... a lesson.
It was a lesson to resign ourselves to God's will. Acknowledge it is beyond us. There on, leave our affair to Allah, trust fate and be grateful with what was given or the least, to not complain.
And, seek for righteousness.
Righteous ...
Allah bestowed on us what we did not seek for, but what we needed.
We need to seek through that fated route with our own set of blips and blunders of judgement and pursuits. And, more importantly, not to be driven and obsessed by worldly pursuits (the Malay word is "kebendaan").
Despite what was gossipped, accused, and slandered, it hardly was a bother and able to astray from remaining true to our course.
Allah neither solve our predicaments in the kun fa ya kun (be and it shall) manner. Without realising it, burdens slowly relieving itself.
Nor did we pursue, but through many people we are grateful to, there was suddenly a breathing space.
Suddenly so small was our trial and tribulation. The one and only Allah truly wujud or existed and never not listened to us.
It even brought us to an unplanned path for Haj to feel further God's existence at the Baitullah hil Haram 10 years ago.
Since then, the insurmountable was so irrelevent in the bigger scheme of things. When it is within ourselves, there is no denying the responsibility to address it remained.
Suddenly through the pandemic, new personal challenges of a different kind emerged.
Faced with a daunting one towards end of last year, another side issue to it, and one emerged recently that require urgency, this may require total resignation to faith and fate.
Over the last two days, we spent the time secluded to prepare for the scheduled Wednesday in spiritual reflection.
We were reminded on the oneness of God through reciting zikir, proclamation of faith, and praises of appreciation to the Messenger of God's message.
Qualities ...
The foundation of the Message for one God in our chosen religion of Islam brought by Prophet Muhammad lies in Iman (the rukun on akidah or belief), Islam (the rukun for obligations), and Ihsan (manifestation of our faith in every aspect of our deeds, actions, and affairs).
The Messenger that brought God's message was the model person whose chacteristics should be emulated as guidance.
Seek for and believe in speaking the truth and  pursuing for the truth (siddeq).
Whoever we are is in our position or station in life, be trustworthy and never betray the trust bestowed (amanah).
Where the Prophet communicate, propagate and exemplify Allah's message, we could emulate to tabligh according to our capacity.
And, lastly it is wisdom (fatanah).
The special quality of keeping within our values and characteristics, but yet able overcome difficult and tricky situation, circumvent challenging circumstances, and remained adherence.
It is not the qualities of Muhammad's greatness as perceived by an orang putih to be the most influential person in history.
It is maybe humanly challenging to replicate his zuhud (simple and pious life) qualities, but humility is within reach. There should be a conscious attempt to translate Muhammad's qualities into every of our life and endeavours.
Had Muslim strived to do so, they would not have gone astray or easily tempted.
They could comfortably resign themselves to the last article of faith to believe in Qada and Qadar (fate and predetermination).
Had individuals, leaders, communities and nations translate the qualities to their role and responsibilities towards blissful existence, there would be peace, justice and abundance in the world today.
Reality ...
Having gone afar in our reflection, we were brought back to mother earth to the reality of our life's new challenges in maintaining to resign our fate with God.
A retired high level Government official we had long befriended shared this Allah's words in Malay ... 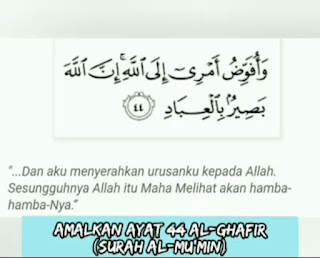 And sometime and usually most of the time,  it is and has always been beyond our humble self. 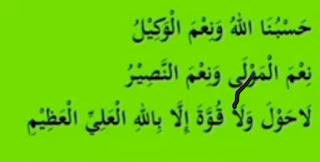