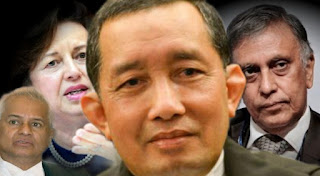 Last week in the midst of the Melaka state election, MACC issued a statement to confirm receipt of US$15.4 million (equivalent to RM65 million) from Singapore's Commercial Affairs Department.

This confirmed the revelation published in this blog dated March 23rd 2021 of collusion involving Zeti, Ambank, Goldman Sachs and Jho Loh taking a bite of the 1MDB bond's cherry. There is another RM635 million more still due.

Through the mechanism of secondary subscriber, Jho Low distributed the deep discount given to various parties including himself and Zeti.

Fast forward, police should be completing their investigation of Zeti and there are basis for her to be charged. Why is the Attorney General covering up for Zeti?

For that matter, why is Tan Sri Idrus Haron covering up for another of Mahathir's man, Tan Sri Nor Mohammed Yakcop? 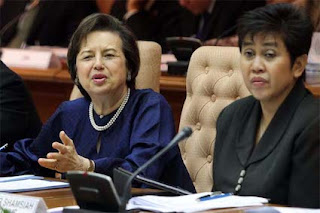 Singapore media reported in February that BNM knew the funds that went into Zeti husband's account came from Jho Low.

In reaction to the expose, Tun Dr Mahathir washed his hands and typical him, pretended not in the know.

He and Tengku Zafrul went to the extent of creating a political ruckus of Najib receiving entitled home from government to divert attention from the latest development on Zeti.

In Mac 2021, Lim Sian See raised the issue that Zeti was involved as Governor to have done the following:

1. BNM was the regulatory body that closed one eye for Ambank to underprice sell RM5 billion worth of 1MDB sukuk bonds to four secondary subscribers, which was subsequently flipped for hundreds of millions for instant profit.

2. The beneficiary of part of the instant profit is Zeti's husband and son.

3. Despite her family being a beneficiary, Zeti lied for pretending as though she "knows nothing about billions of Ringgit transfers to Najib's accounts despite being informed by Ambank all the time and despite Najib instructing Ambank and her to monitor his bank accounts for suspicious transactions.

For that matter, Lim Sian See raised the issue that:

"PH and PN government never told Najib nor gave Najib's defense team the evidence that the family of Zeti (who is prosecution witness) had received so much payments from Jho Low long before Najib ever received a single sen that was eventually traced back to 1MDB or SRC".

The MACC statement confirmed this suspicion. 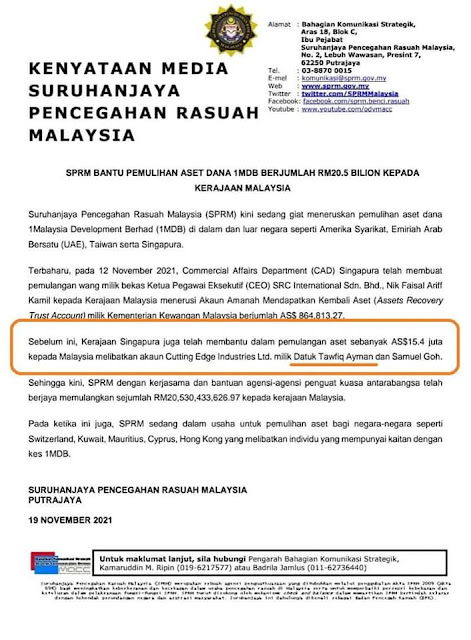 Is it fair then to be suspicious of Idris Haron as an accomplice covering up for Zeti?

In the US court, Goldman Sach's Tim Leissner admitted to bribing 1MDB and government officials, but the American Department of Justice intervened to disallow the accomplice names to be revealed.

In Malaysia, Dato Najib is on trial and witholding the information is a gross injustice.

At the same time, the AGC's prosecutor covered up by intentionally holding back from putting Zeti up as witness in both the SRC and on-going 1MDB case.

And, AGC held back Tan Sri Nor Mohamed from being made witnesses too.

Lim Sian See hinted of another accomplice with Zeti. Well, Nor Mohamed's name was already mentioned in this blog's end of September posting.

It was mentioned in an Investigation Paper prepared by Deputy Commissioner for AMLA, Dato Muhammad Zamri bin Zainul Abidin.

Nor Mohamaed Yakcop was the Minister who presented to Cabinet for approval of SRC and believed to have mooted the idea of SRC. He is a material witness for SRC, but Tommy Thomas witheld him as witness.

There will be those defending Idrus Haron with the argument that the cases are on-going and it was laid together by his predecessor Tan Sri Tommy Thomas and executed by Dato Gopal Sri Ram.

The argument sounded like Tan Sri Muhyiddin's excuse he will not interfere.

As current Attorney General, Idrus Haron should have acted accordingly to right the wrong and ensure the process of justice is on the right path to uncover truth than hiding the truth.

Zeti and Nor Yakcop should be put up on the stand for court scrutiny.

Since it was not done, though respected by his legal peers, Idrus is an accomplice to injustice.

Police merely confirmed investigation on-going few months ago. Thanks to Little Bird, it is known there is an IP by MACC. All silence from Idrus.

He will have to live with the guilt and conscience through his retirement for being a party to crimes committed by top government officials.

The truth behind 1MDB and for that matter, already judged SRC case is shrouded with too much cover-up and strange actions by law enforcement officials, prosecutors and judges.

To the more discerning legal practitioners and in the know of happening behind the scene, it has all the ingredients of a set-up and covered up being done for political expediency.

Pity the public being duped into lies perpetuated by the evil Mahathir and denied from the truth.

A big bird once told me what is essentially Mahathirism:
Dia semua betul, orang semua salah