Should be arrested: Zeti, Nor Yakcop, Tawfiq 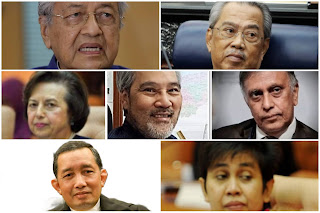 MACC confirmation receiving US$15.4 million (RM65 million) of laundered 1MDB monies from Singapore is currently causing an uproar.
Why is the Malaysian law enforcement not acted on former BNM Governor Tan Sri Dr Zeti Aziz, husband Dato Tawfiq Ayman, and also former Minister Tan Sri Nor Mohamed Yakcop?
Together with the statutory declaration signed by Tawfiq to Singapore's CAD, there are more than sufficient grounds for Police's Commercial Crime Investigation Department to arrest Tawfiq and Zeti as suspect for investigation.
Minister in the PM's Department, Dato Wan Junaidi confirmed in Parliament that police have been investigating the couple and only made known by BNM of the monies confiscated by Singapore authority in 2019.
When asked recently online, former Attorney General, Tommy Thomas claimed investigation was not completed and no action could not be done on his part then. Or perhaps, conveniently not carried out.
At the same time, Nor Yakcop should be called in by MACC for investigation. This blog shared the information that his name appeared in an Investigation Paper prepared by MACC's Director for AMLA, Dato Zamri.
There are grounds to believe the tip off.
Idrus Haron? 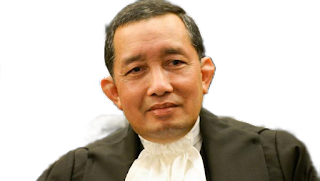 There is talk in the market that the warrant of arrest is already on Attorney General, Tan Sri Idrus Haron's table. However, Idrus has not signed the warrant and refused to do so despite request by his superior to take immediate action.
This could further extend the suspicion of Idrus as an accomplice and beholden to Tan Sri Muhyiddin.
Upon checking with sources, a warrant of arrest does not require the signature of the AG. Such procedure is only applicable in the US. In Malaysia, a superior police officer is empowered to sign a warrant of arrest to question the suspect. It is the Investigation Paper that should be forwarded to AG.
Though the rumour is technically wrong, it could wrongly imply police is reluctant to take responsibility and passing the buck to AG. Consequently, other speculations could arise.
The long and short of it is this has taken too long and Zeti and Tawfiq should be arrested immediately. Though both have given statements to the police on the Singapore SD, more leads and stories with specifics have surfaced.
Zeti's denial is no more believable. She and her husband are suspects for crimes committed and a thorough investigation is required.
Governor Nor Shamsiah 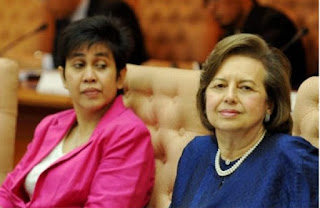 Zeti claimed to not know of monies that went into Najib's account. However she authorised fund transfer and receipt of monies. Ambank CEO's testimony in court claimed she was notified of remittance of monies for Najib.
As Governor, she was fully aware that Singapore CAD notified BNM in 2015 of money channeled into companies linked to Tawfiq. However, Zeti did not notify police.
Current Governor, Tan Sri Nor Shamsiah was then the Deputy Governor in charge of investigation, AMLA, intelligence, and compiling information received from foreign counterpart. Nor Shamsiah and her network of trusted officers are suspected of collaborating to cover-up and should also be called up for questioning, as a start.
Raja Petra's revelation here mentioned on the existence of the network. It has been the talk from within BNM.
Tawfiq's partner in Cutting Edge, Samuel Goh was reported to be behind the fake companies of Aabar Investment PJS (BVI) that received the diverted 1MDB money meant for the real Aabar. He admitted in a 2016 trial in Singapore.
At the same time, Samuel set up Bridge Capital that became so-called Fund Manager for Unit Fund in BSI. Apparently the investment got wiped off. Bridge name appeared in the latest trial of 1MDB-Tanore.
Tawfiq's collaboration with Jho Low goes way back to a 2007 partnership in AKDMIC, It is the third tranche scheme of Jho Low mentioned in a US Attorney General, Loretta Lynch statement which revealed on 1MDB in July 2016.
Nor Mohamed Yakcop 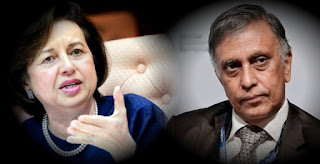 In Dato Najib's statement yesterday after his police report at Dang Wangi, the Edge Online reported him mentioning below:

"I was also made aware that another key prosecution witness in my SRC case had similarly received more than RM85 million of funds directly linked to 1MDB and again me and my legal team were not told about this despite the individuals playing key roles in the SRC case,” he claimed.

Najib made the report on the witholding of information by prosecution that made it detrimental to his 1MDB and SRC cases.
During the 1MDB-Tanore trial, High Court judge Dato Collin Sequerah warned Najib against mentioning Zeti on his FB.
The third person Najib meant is Nor Yakcop. 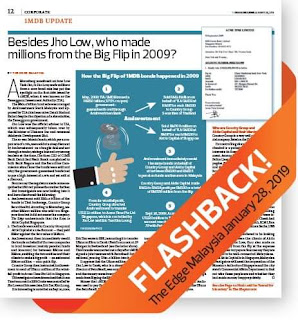 Read Lim Sian See here.
In this blog's exposure here, it is mentioned below:

MACC should be calling on Nor Yakcop.
_________
Be it police or MACC or AG Chamber including the court, they should not ignore Zeti, Tawfiq and Nor Yakcop.
Zeti and Nor Yakcop are no more court game of holding back on witnesses that could weakened prosecutor's case. 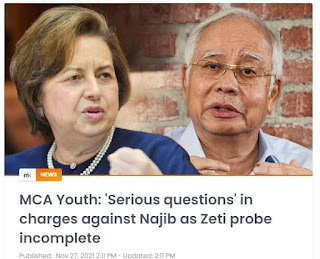 As more on the the two are exposed to the public, the Attorney General has a responsibility to right the wrong of his predecessor. The AG Chamber had prosecuted based on an incomplete investigation.
The inability on the part of prosecution to prove the key element of knowledge in Najib's SRC case is more glaring.
Furthermore, the call for investigation on Zeti is not merely made by Najib's supporters, but can be heard coming from DAP, PKR, and MCA politicians.
at 11/28/2021 04:02:00 PM