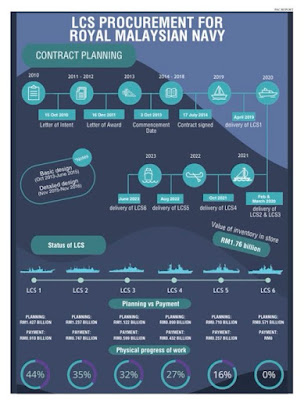 "What matter is the the country loses. The navy, ATM loses. Today we're sending our young sailors facing potential adversary at sea - who are just waiting for orders from their government to push the button; naked and defenseless."

This is a quote from one Navy officer. His concern is genuine and agreeable. We emphatise.

Who then to blame?

Zahid denied he was MINDEF when the contract was put to paper. Liew Chin Tong insisted on accusing Zahid since he agreed to BNS proposal for Gowin.

TLDM Chief of Navy seemed ticked off by BNS and MINDEF for ignoring TLDM in the decision to opt for Dutch SIGMA over French Gowindand changes to design.

As users, their consideration should be given highest priority. They are not wrong and the change has resulted in rising cost, claimed a Navy source.

From the government side, they probably see Sigma model as an unexplored territory in technical cooperation.

Our guess is the French is considered over Dutch in view of the established relation with DNS of France. Need to confirm, but heard they already delivered other Gowind ships for other countries.

It was also the opportunity to help Boustead and LTAT.

Go back a little longer Mahathir and Daim privatise the Naval Dockyard to Amin Shah and Penang Shipbuilding Corporation (PSC) and made a mess of the OPV contracts.

It was also not delivered.

Boustead end up having to takeover the contract and PSC and thus change name to PSC Naval Dockyard.

Today it is named as Boustead Naval Shipyard (BNS). Not Barisan Nasional Shipyard.

Government have been putting Boustead into financial difficulty with the non-payment for past contracts too. Off-course the sentence need qualification.

There is more to the story than the soundbytes by politicians including Najib's accusation of PH for stopping the project in 2019 and his replies and counter questions.

Believe there is also animosity between the former CN Tan Sri Aziz and his predecessor in TLDM and Managing Director of BHIC, Tan Sri Ahmad Ramli Mohd Nor.

Aziz have been quite adamant and insistent on going Dutch. He had written 10 letters to government to oppose the changes to the Gowind. 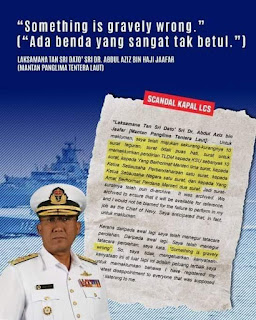 Can he back the claim "something is gravely wrong" with specifics? 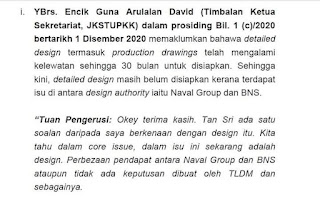 There could be a clash of ego between him and his predecessor. Was the 30 months delay due to his possible micromanagement part of it?

To qualify, the failure to deliver gave him justification to raise issues and cannot be accused of any insidious reasons.

For the rest of us outside the millitary and political establishments, it is pertinent to put our own finger on the real problem.

Read the reports suggested by Nurul. 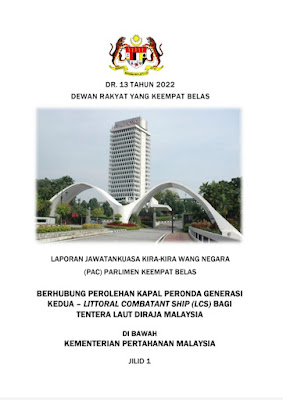 Or at least the PAC report.

As far as the soundbytes from social media which came from politicians and politicians' generated PAC report, do make own independent assessment before accussing of corruption.

Only MACC investigation could ascertain. And AGC could determine legal admissibility.

However, with Gopal Sri Ram suspiciously believed to be involved in manipulating and orchestrating from the MACC IP to judgement written, not sure which institution can be trusted as fair and politically free.

So do not be swayed by propaganda for the simpleton such as "RM6 billion spent but no ship delivered".

First few pages of PAC report seemed propagandic too and abundantly used and in Goebbels' fashion being repeated by politicians and cybertroopers. 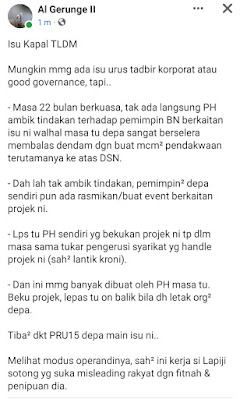 Do ponder, what is PH motivation to do nothing  during their 22 months since 2018 and wait for near GE15 in 2022 before all this comes out?

Liew Chin Tong himself was at a launching of the LCS during their reign in government.

They are just politicising using PAC.

What happen to missing jet engine issue they raised back then? Is the whistleblowing general also in cahoot too but talked when he turned political?

Before writing further on the subject, which we have lots of material to put together, the words of the current Navy Chief, Tan Sri Mohd Reza Mohd Sany should be a reminder.

Threat coming everywhere. Security of the realm should be foremost on our mind. It should not be fodder for political games.

From Thick as a Brick