A Apolitical Blues: Register as Voter Before March 31st, 2007

I've got the apolitical blues, yeah
Apolitical blues
The meanest blues of all
I don't care if it's the unholy four, John Wayne, or Dorothy Lamour
I just don't wanna talk to 'em now
-- Little Feat, Sailing Shoes (1972)


Apolitical or its synonymous terms, non-political or un-political, means having no interest in or association with politics, or a matter having no political relevance or importance.
If our social sphere is wide enough, we should observe that significant percentage of Malaysians is apolitical. Come election, campaigning by candidates is to convince these apolitical citizens or undecided voters, which in some areas could make or break a candidate. 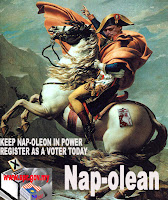 What made some Malaysian apolitical? It's no disease but personal priority. You're likely to find this phenomenon in every country in the world, even countries with liberal freedom of speech and expressions. It may have a different percentage and profile but they exist.
There is a gamut of reasons to explain for these apolitical Malaysians. It could be out of ignorance and/or inability to comprehend complex socio-political issues. At the other end of the scale, it is apathy. "Urgh! This is politics. Cannot do anything lah. No point talking." This is the typical reaction to any serious discussion of public interest.
Indifference maybe the seldom quoted reason, however apathy could be a reaction brought about by frustration or disenchantment with bureaucracy and inefficiencies of civil servants, local council, regulators and authorities. It could also be due to impatience with the tedious and strenuous political process, and insufficient understanding of issues.
Actor Bruce Willis made a cute quote to express his frustration, "I hate government. I'm apolitical. Write that down. I'm not a Republican." It's his not-so-subliminal expression of his Democrat affiliations humorously expressed as apolitical. At that moment, the Republican must be in power and he is driving the fence sitters the Democrat way.

Then, there is the common repulsion "politics is dirty". Well, it's the people that made it so, but enough to put off many.

Certainly to many, politics is a luxury many could ill afford to spend time on, especially with the present confusing state of the economy. Ironically, with so many middle class and professionals affected by the poor handling of the economy, the noise from this usually apathetic segment is getting heard. It just goes to show that no one is permanently apolitical. Conversely, no one is permanently political.

To a significant many, they opt for a pragmatic political participation of middle ground politics based on the possibility for problem solving and addressing issues. This is often translated to affiliate "within the system" of Barisan Nasional (BN) political parties and its history of consensual politics.

Some became political reactionaries by turning to opposition politics to vent their critical energy. They see turning the distant possibility of changing the ruling party to be not so distant as the only solution. And, there are those throwbacks to feudalism days, whose involvement in politics come out of idolisation of personalities.

Politics is obviously perceived differently to different people but it is generally accepted to relate with government and power. A common simpleton view of politics is about achieving positions in public offices or political parties. There is also the cheeky perception of politics "as art of the possible".

Politics is the process and interplay of human social groups in making of decisions. Be it within government, corporate, academic, religion, and even the smallest social unit of family, politics is the "social relations involving authority or power". It has its science and art - theory, practice, description and analysis of system and behaviour. The whole shenanigan to justify the existence of political scientist, analyst, and political science professors.

One major determinant in politics is perceptions. Perception could be created via communication, media, and ear whispering and is said to be everything in politics. Political career could be created or destroyed by perceptions. Since the medium for publicity and airtime is limited commodity, there is tendency for quite a number of politicans to economise their political product and optimise the place and promotional elements in marketing themselves.

This is the area lacking in our politics. Politics of conspiracy is perpetuated rather than politics of governing. Instead of being more cerebral, our politics tend to be emotional, unjustified, and devoid of proper objective. The political behavior in the acquisition and application of power need to be more rationale. It must be based on rational political philosophy, ethical public behavior, and deliverables.

Sometimes, seemingly justified heli-view is misplaced hypocrasy. For instance, talking about racial integration but supporting vernacular schools. Promoting an Islamic branding but devoid of true values and content. There are those argument based on the Letters of Law and yet is in conflict with the Social Agreement of our forefathers as embedded in the Constitution.

If Malaysia is moving towards a k-Economy, so it seems said our Prime Minister with a Father of k-Economy title, then it is high time we move towards k-Politics. That's politics based on fact, information and rational arguments, rather than perception, hearsay, and cloak and dagger story of coffeehouses, warung and tai pai dong. The Prime Minister could even launch this k-Politics with all the pomp and pageantry he desperately desire for the next General Election hype. But do start by answering those unanswered questions. 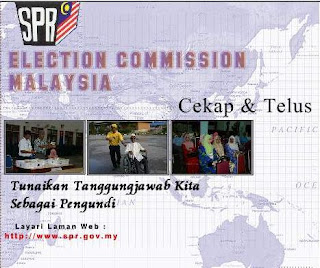 Whether a person is considered political or apolitical, they generally have natural concerns. Everyday, we hear the berating, concerns, suggestions and argument for and against our government, and public officials. Are these voices legitimate voices? As citizen, it's their right to express their piece for or against. The subsequent question is: Are they responsible voices?

Responsible citizenship is not just about expressing their opinion. The bigger responsibility is to cast their vote to select the representatives for Parliament or State Assembly. This is an important aspect of citizenship. These representatives are the avenues to express our voices at the highest institution of Government.

The basis you vote could be for any reasons. You could be voting for the ability as lawmaker or at the other end as community problem solver. Whether you voted based on the candidate's likeable personality or his party affiliation or just on his ability, the vote is yours to cast. I do hope the basis is rational and come with practical expectations.

Many people are perceptive and eloquent in indentifying, analysing, and arguing of issues. If they do not vote, are they worth any salt? Think about it. If they can't even exercise the very simple and basic right as citizen, does it indicate the seriousness of their concerns?

So, if you are a registered voter, come out and vote.

If you qualify but yet to register as voters, do so. Read the Election Commission Malaysia (ECM)'s website http://www.spr.gov.my for instruction. In a news report on March 16th, 2007 mStar (The full news report here), Secretary of the ECM, Datuk Kamaruzaman Mohd Noorin is reported as follows:

Please register before the voters' roll is closed this March 31st, 2007.

But if you registered as voter or qualify but did not register to vote, forever hold your peace.

I don't care if it's the unholy four, John Wayne, or Dorothy Lamour.
I just don't wanna talk to 'em now.

A very good reminder indeed, thanks!

Hey there... thanks for the heads-up. Got here via Rocky's post, by the way.

As I mentioned over there, I am one of those who felt all these years that being apolitical was the right thing to do.

Times, unfortunately, have changed - and not for the better, vis à vis the political landscape. And it's probably time that I exercised my right to make a difference.

The only dilemma now is that, where I vote, it may be a situation that I call "freedom of no choice". That, I guess, is a bridge I'll need to cross when the time comes.

let us all register in kepala batas, what say you.

On my way, buddy. Relocating my vote from Bandar Tun Razak to Kelana Jaya.

Hey, I like the theme songs! Feelin' the Monday blues ...

I feel the same bro. I felt compelled to sign up 3 elections ago, and I have been voting ever since.

I still vote in my hometown in Negri Sembilan. Sentimental about it. Its another reason to balik kampung to where I was born.

And thanks for blogrolling me. U hav a new fan here as well.

Whoa..a blast from the past. Little Feat is my all-time favorite group and I have the excellent Live Double Album "Waiting For Columbus", which some critics claim as the best live album EVER... Anyway, thanks for creating an awareness amongst the voting public with your well-written essays bro'... I remain, an ardent-fan.