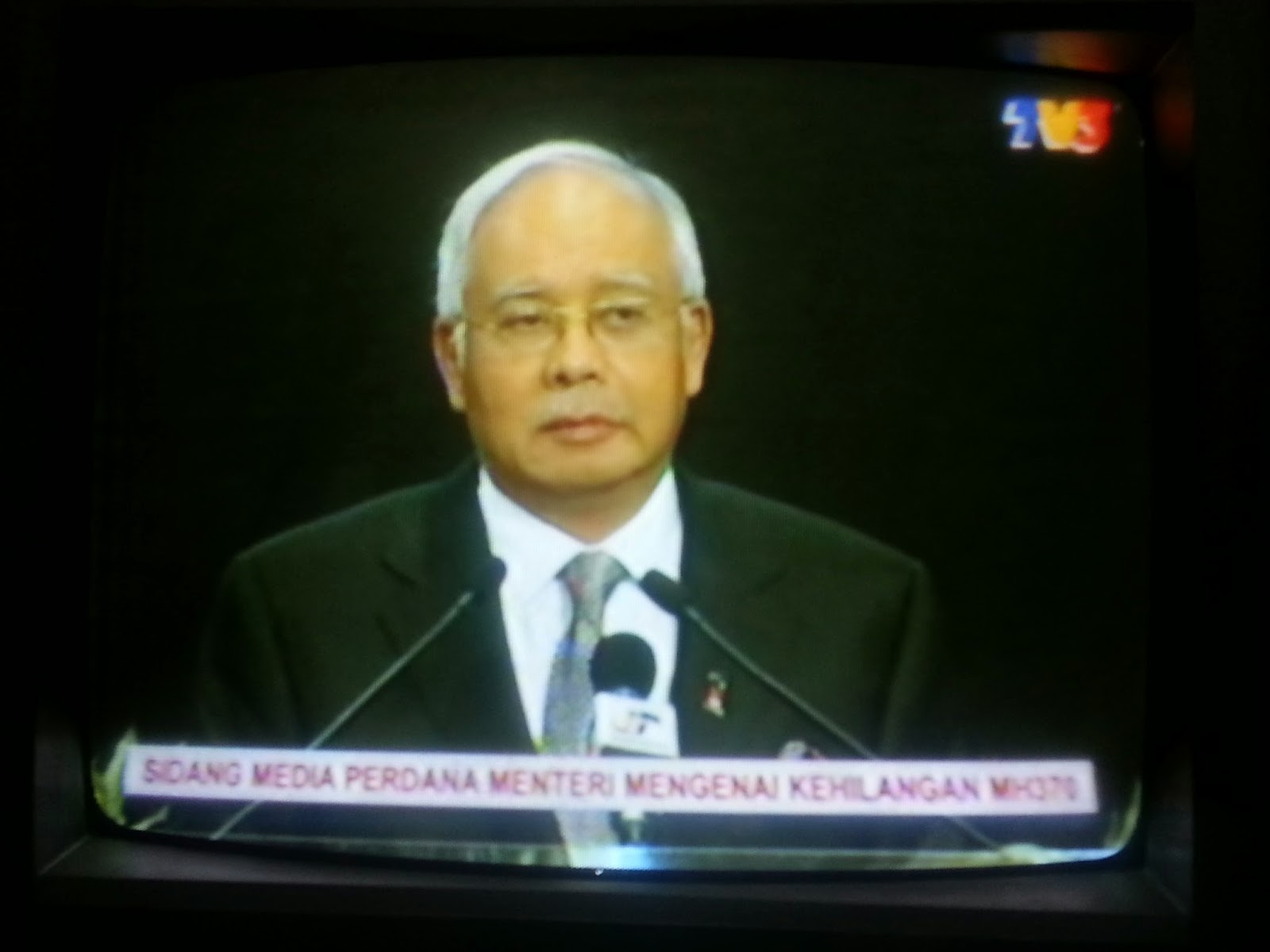 Prime Minister Dato Najib Tun Abdul Razak will be holding a press conference on MH 370 at PWTC at 10:00 PM.

The only clue to this PC must be development in the effort by the Australian. There was a news release by CBC News Australia, reproduced below: 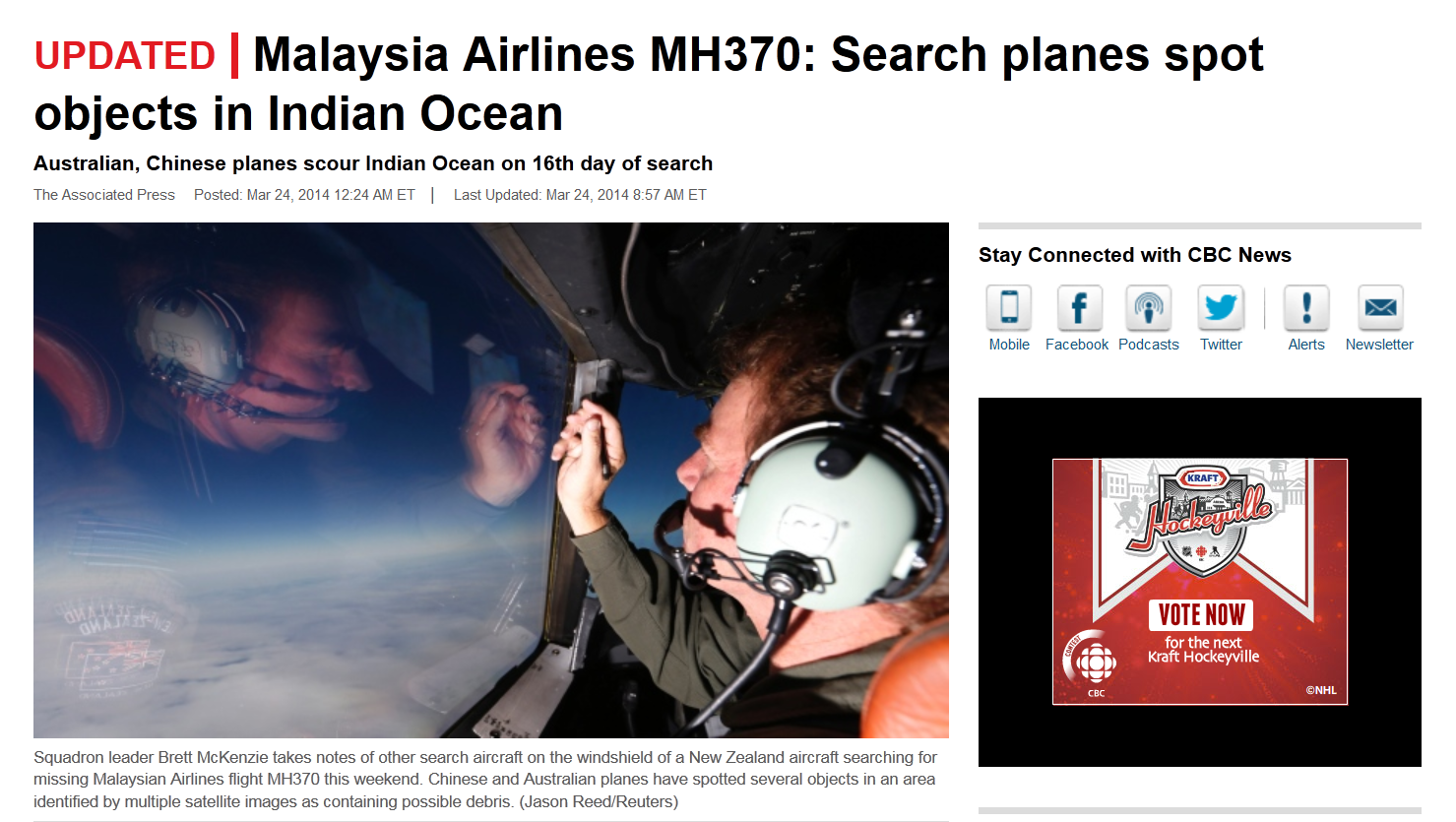 Ships rushed to the location of floating objects spotted Monday by Australian and Chinese planes in the southern Indian Ocean close to where multiple satellites have detected possible remains of the lost Malaysian airliner.

One ship was carrying equipment to detect the plane's vital black box, but it remained uncertain whether the vessels were approaching a successful end to the search or another frustrating dead end.

"They could be flotsam," Australian Prime Minister Tony Abbott said in Canberra. "Nevertheless we are hopeful that we can recover these objects soon and that they will take us a step closer to resolving this tragic mystery."

In one of two new sightings Monday, Abbott said the crew on board an Australian P3 Orion had located two objects in the search zone — the first grey or green and circular, the second orange and rectangular. The crew was able to photograph the objects, but it was unclear if they were part of an aircraft.

An Australian navy supply ship, the HMAS Success, was heading to the area to get a closer look, and Malaysia's Defence Minister Hishammuddin Hussein said the vessel could reach them Monday night or by Tuesday morning.

Separately, the crew aboard one of two Chinese IL-76 aircraft combing the search zone observed two large objects and several smaller ones spread across several square kilometres, Xinhua News Agency reported. At least one of the items — a white, square object — was captured on a camera aboard the plane, Chinese Foreign Ministry spokesman Hong Lei said.

"We are still racing against time," Hong said at a ministry briefing. "As long as there is a glimmer of hope, our search efforts will carry on."

China has redirected the icebreaker Snow Dragon toward the latest find, and that ship was due to arrive early Tuesday. Six other Chinese ships have been directed toward the search zone, about 2,500 kilometres southwest of Perth, along with 20 fishing vessels that have been asked to help, Hong said.

Relatives of passengers aboard the missing Boeing 777-200 were closely following news reports of the latest sightings, desperate for any word on the fate of loved ones.

"We're eager to learn more about this," said Wang Zhen who is staying at a hotel near Beijing. His father and mother, Wang Linshi and Xiong Yunming, were both aboard Malaysia Airlines Flight MH370 as part of a group of Chinese artists touring Malaysia.

Satellite images and data released by Australia, China and France in recent days have identified possible debris in the area that may be linked to the disappearance of the plane on March 8 with 239 people on board — two-thirds of them Chinese.

The ocean depth in the search area ranges between 1,150 metres and 7,000 metres, and the U.S. Pacific command said it was sending a black box locator in case a debris field is located.

The Towed Pinger Locator, which is pulled behind a vessel at slow speeds, has highly sensitive listening capability so that if the wreck site is located, it can hear the black box "pinger" down to a depth of about 6,100 metres, Cmdr. Chris Budde, a U.S. Seventh Fleet operations officer, said in a statement.

"This movement is simply a prudent effort to pre-position equipment and trained personnel closer to the search area so that if debris is found we will be able to respond as quickly as possible since the battery life of the black box's pinger is limited," Budde said.

An Australian navy support vessel, the Ocean Shield, was also moving into the search zone and would arrive in three or four days, a defence official said. The ship is equipped with acoustic detection equipment that can search for the missing plane's black box.

There was no sign the move was linked to any breakthrough in the mystery of the plane, but rather as a preparation.

"The time for the battery life [of the 'pinger'] is potentially only a month," said Jason Middleton, aviation professor at the University of New South Wales in Sydney. "If debris was found, it would be terrible not have anything on site and waste time" getting a ping detector to the region. "I think they're planning ahead and getting it ready."

The search was given added momentum when a French satellite detected potential debris on Sunday, after Australia and China earlier released satellite images identifying suspect objects.

Australian Transport Minister Warren Truss said the French radar data located the objects about 850 kilometres north of the current search area, and that "we need to check that out as well."

Australian authorities had sent planes and a ship to try to locate a wooden pallet that was spotted on Saturday from a search plane, but the spotters were unable to take photos of it.

Wooden pallets are most commonly used by ships but are also used in airplane cargo holds. Hishammuddin, the Malaysian defence minister, confirmed Monday the flight was in fact carrying wooden pallets. But he said there was not yet any evidence that the pallets found by the Australians were related to the missing plane.

The southern Indian Ocean is thought to be a potential area to find the jet because Malaysian authorities have said pings sent by the Boeing 777-200 for several hours after it disappeared indicated that the plane ended up in one of two huge arcs: a northern corridor stretching from Malaysia to Central Asia, or a southern corridor that stretches toward Antarctica.

Malaysian authorities have not ruled out any possible explanation for what happened to the jet, but have said the evidence so far suggests it was deliberately turned back across Malaysia to the Strait of Malacca, with its communications systems disabled. They are unsure what happened next.

Authorities are considering the possibilities of hijacking, sabotage, terrorism or issues related to the mental health of the pilots or someone else on board.

Malaysia's police chief, Inspector General Khalid Abu Bakar, reiterated at a news conference Monday that all the passengers had been cleared of suspicion.

But he said that the pilots and crew were still being investigated. He would not comment on whether investigators had recovered the files that were deleted a month earlier from the home flight simulator of the chief pilot.

Malaysia Airlines chief executive Ahmad Jauhari Yahya said co-pilot Fariq Abdul Hamid had just transitioned to flying Boeing 777s from other commercial planes and the missing flight was his sixth on that type of aircraft.

Fariq had passed all training requirements to fly without incident, Ahmad said.

It could be good and bad news.

The good news is that the endless search has found it's end and lead.

But the bad news is that there is unlikely to be any survivors. If survive, it is not easy to stay alive after more than 5 days. If it had punged into the Indian ocean, then any chance of survival is reduced.

The headache will not be over for Malaysian Airlines as more information on the reason the plane found itself on the Southern corridor uncover itself. It could open the company to possible lawsuit. 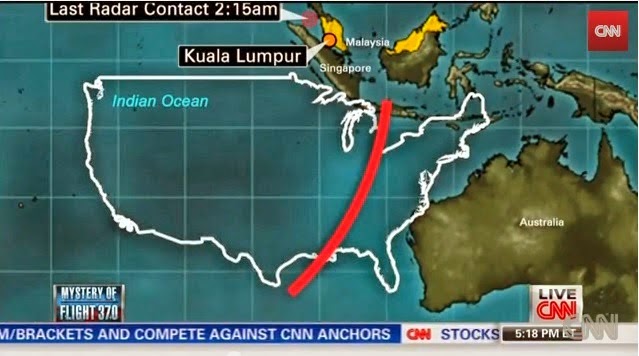 After the challenge of locating the plane in an area the size of the United States and rough waters with threat of a cyclone looming, the next challenge is to uncover the plane from a depth 7 times the height of KLCC. 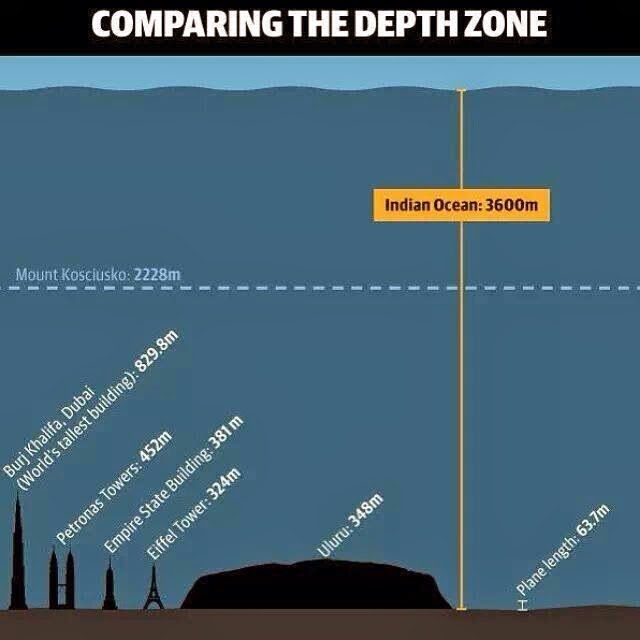 So far the government and MAS have not spared any effort to find the disappeared airplane and have shown great commitment to the families of the crew and passengers.

Too many speculation, wild accusation and display of emotion have not been helpful but MAS perservere with responsibilities.

It is impossible for MAS or government to withheld any information. The most unlikely thing to happen is for government and MAS to try a cover-up with so much global attention.

It has not been easy to mange a crisis of such magnitude and more so for a country with limited capacity to afford such sophisticated defense assets.

There is a high dependent on foreign help and that poses a complex security issue to secure information. Most country hold on tight to any clue on their defense capability.

Wait for the PC.

PM confirmed the plane's location found at the Southern Corridor of the South of the Indian Ocean as provided by the AAIB.

The PC was to fulfill the promise to provide the latest development on MH370. The families of crews and passengers have been informed. A PC to provide the details to be held tomorrow.

This evening I was briefed by representatives from the UK Air Accidents Investigation Branch (AAIB). They informed me that Inmarsat, the UK company that provided the satellite data which indicated the northern and southern corridors, has been performing further calculations on the data. Using a type of analysis never before used in an investigation of this sort, they have been able to shed more light on MH370’s flight path.

Based on their new analysis, Inmarsat and the AAIB have concluded that MH370 flew along the southern corridor, and that its last position was in the middle of the Indian Ocean, west of Perth.

This is a remote location, far from any possible landing sites. It is therefore with deep sadness and regret that I must inform you that, according to this new data, flight MH370 ended in the southern Indian Ocean.

We will be holding a press conference tomorrow with further details. In the meantime, we wanted to inform you of this new development at the earliest opportunity. We share this information out of a commitment to openness and respect for the families, two principles which have guided this investigation.

Malaysia Airlines have already spoken to the families of the passengers and crew to inform them of this development. For them, the past few weeks have been heartbreaking; I know this news must be harder still. I urge the media to respect their privacy, and to allow them the space they need at this difficult time.

For starters, no physical evidence which can be linked to the plane have been retrieved yet, despite many sightings from the air and satellite.

Also, even if SAR identifies approximately where the plane is believed to have crashed into the Indian Ocean, it could still take years to locate the remains of MH370 on the ocean floor.

After all, despite the known location of the crash into the Atlantic Ocean of Air France Airbus Flight AF447, it still too two years before the aircraft was located and retrieved from a depth of around 4,000 metres.

Some accounts believe that the part where the plane is believed to be could also be around 4,000 metres deep but still, it will be a daunting and very expensive task.

Next is the challenge to find out what went wrong which resulted in what happened to the plane.

There's still a long, long way to go before the authorities get to the bottom of all this.