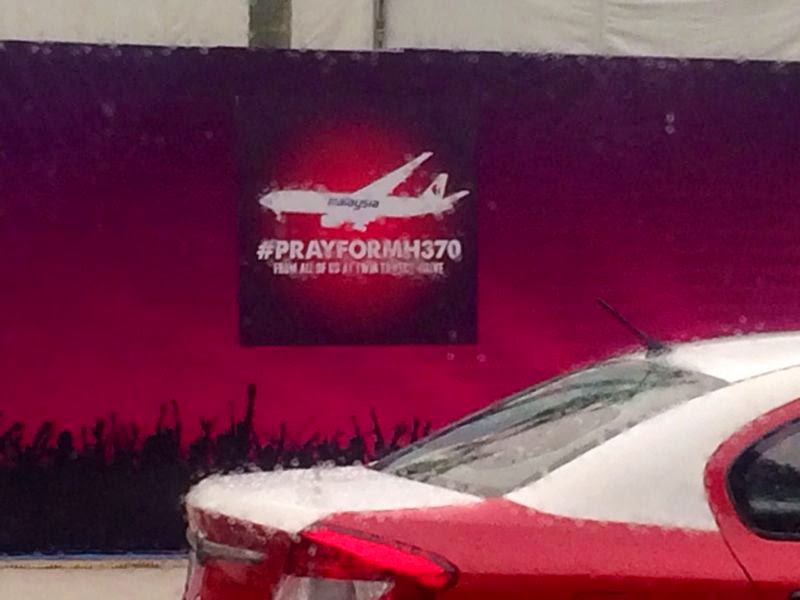 Seven days ago Malaysia Airlines flight MH370 disappeared. We realise this is an excruciating time for the families of those on board. No words can describe the pain they must be going through. Our thoughts and our prayers are with them.

I have been appraised of the on-going search operation round the clock. At the beginning of the operation, I ordered the search area to be broadened; I instructed the Malaysian authorities to share all relevant information freely and transparently with the wider investigation team; and I requested that our friends and allies join the operation. 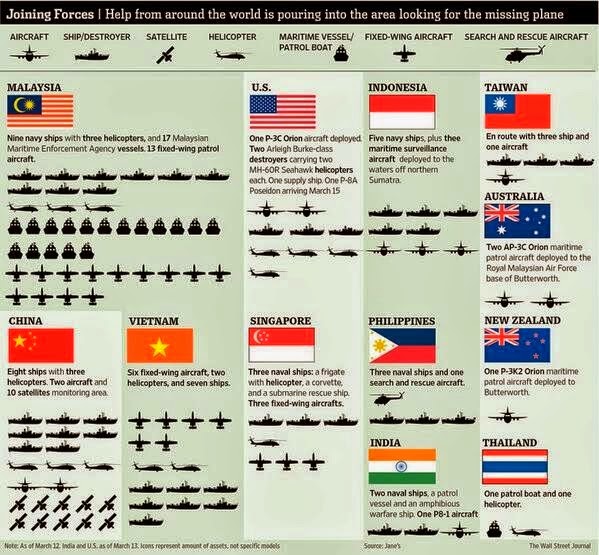 As of today, 14 countries, 43 ships and 58 aircraft are involved in the search. I wish to thank all the governments for their help at such a crucial time.

Since day one, the Malaysian authorities have worked hand-in-hand with our international partners – including neighbouring countries, the aviation authorities and a multinational search force – many of whom have been here on the ground since Sunday.

We have shared information in real time with authorities who have the necessary experience to interpret the data. We have been working nonstop to assist the investigation. And we have put our national security second to the search for the missing plane.

It is widely understood that this has been a situation without precedent. 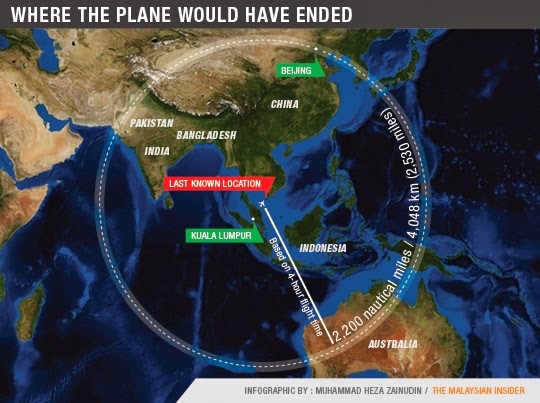 We have conducted search operations over land, in the South China Sea, the Straits of Malacca, the Andaman Sea and the Indian Ocean. At every stage, we acted on the basis of verified information, and we followed every credible lead. Sometimes these leads have led nowhere.

There has been intense speculation. We understand the desperate need for information on behalf of the families and those watching around the world. But we have a responsibility to the investigation and the families to only release information that has been corroborated. And our primary motivation has always been to find the plane. 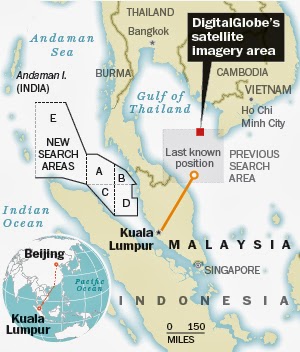 In the first phase of the search operation, we searched near MH370’s last known position, in the South China Sea.

At the same time, it was brought to our attention by the Royal Malaysian Air Force that, based on their primary radar, an aircraft – the identity of which could not be confirmed – made a turn back. The primary radar data showed the aircraft proceeding on a flight path which took it to an area north of the Straits of Malacca.

Given this credible data, which was subsequently corroborated with the relevant international authorities, we expanded the area of search to include the Straits of Malacca and, later, to the Andaman Sea. 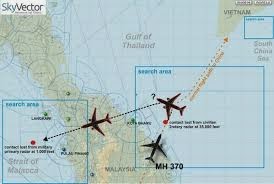 Early this morning I was briefed by the investigation team – which includes the FAA, NTSB, the AAIB, the Malaysian authorities and the Acting Minister of Transport – on new information that sheds further light on what happened to MH370.

Based on new satellite information, we can say with a high degree of certainty that the Aircraft Communications Addressing and Reporting System (ACARS) was disabled just before the aircraft reached the East coast of peninsular Malaysia.

Shortly afterwards, near the border between Malaysian and Vietnamese air traffic control, the aircraft’s transponder was switched off.

From this point onwards, the Royal Malaysian Air Force primary radar showed that an aircraft which was believed – but not confirmed – to be MH370 did indeed turn back. It then flew in a westerly direction back over peninsular Malaysia before turning northwest.

Up until the point at which it left military primary radar coverage, these movements are consistent with deliberate action by someone on the plane.

Today, based on raw satellite data that was obtained from the satellite data service provider, we can confirm that the aircraft shown in the primary radar data was flight MH370. After much forensic work and deliberation, the FAA, NTSB, AAIB and the Malaysian authorities, working separately on the same data, concur. 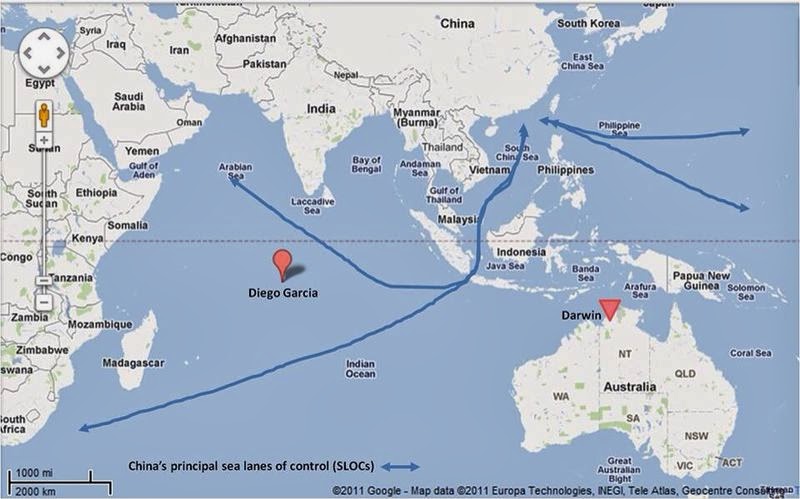 According to the new data, the last confirmed communication between the plane and the satellite was
at 8:11AM Malaysian time on Saturday 8th March. The investigations team is making further calculations which will indicate how far the aircraft may have flown after this last point of contact. This will help us to refine the search.

Due to the type of satellite data, we are unable to confirm the precise location of the plane when it last made contact with the satellite. 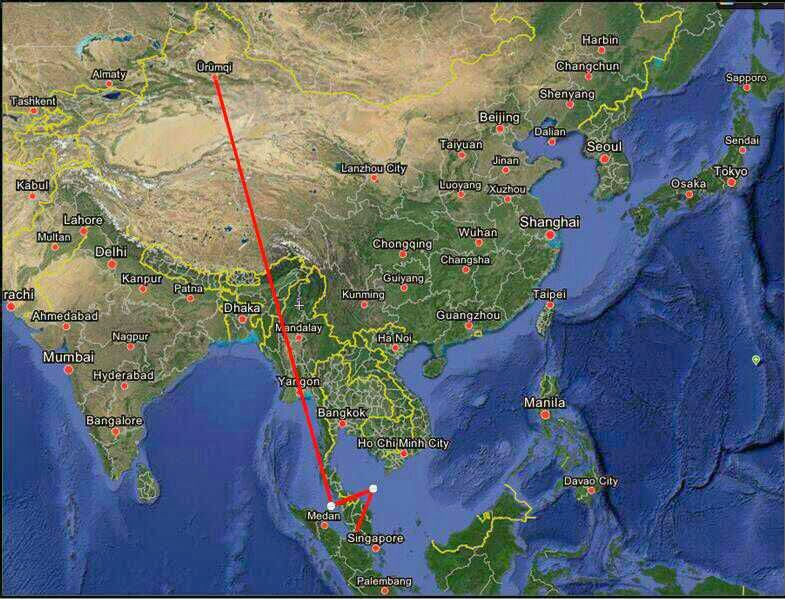 However, based on this new data, the aviation authorities of Malaysia and their international counterparts have determined that the plane’s last communication with the satellite was in one of two possible corridors: a northern corridor stretching approximately from the border of Kazakhstan and Turkmenistan to northern Thailand, or a southern corridor stretching approximately from Indonesia to the southern Indian ocean. The investigation team is working to further refine the information.

In view of this latest development the Malaysian authorities have refocused their investigation into the crew and passengers on board. Despite media reports that the plane was hijacked, I wish to be very clear: we are still investigating all possibilities as to what caused MH370 to deviate from its original flight path.

This new satellite information has a significant impact on the nature and scope of the search operation. We are ending our operations in the South China Sea and reassessing the redeployment of our assets. We are working with the relevant countries to request all information relevant to the search, including radar data.

As the two new corridors involve many countries, the relevant foreign embassies have been invited to a briefing on the new information today by the Malaysian Foreign Ministry and the technical experts. I have also instructed the Foreign Ministry to provide a full briefing to foreign governments which had passengers on the plane.


This morning, Malaysia Airlines has been informing the families of the passengers and crew of these new developments.

Clearly, the search for MH370 has entered a new phase. Over the last seven days, we have followed every lead and looked into every possibility. For the families and friends of those involved, we hope this new information brings us one step closer to finding the plane.

Maybe some separatists in Myanmar stole it?