The issue boils down to 1MDB 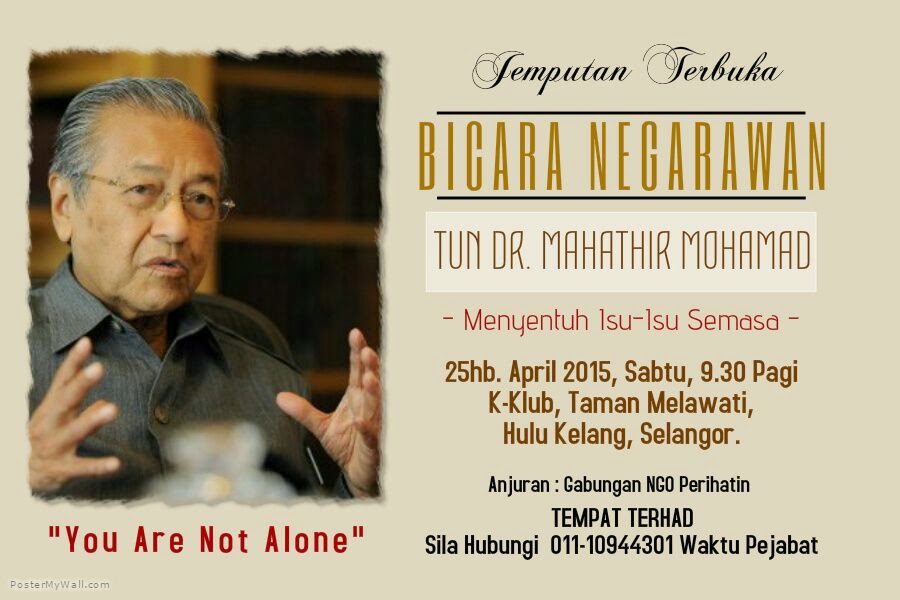 Tun Mahathir's last word on 1MDB in the supposedly private session with bloggers on April 10th was "If I don't believe it is true, I wouldn't do it."

He emphasised, "I have no agenda against Najib. My agenda is about this country."

That was not the last question for the day. As told by a blogger who was there, it was Rocky's. He said Najib repeatedly said he still respect Tun so will they meet.

Tun's replied, "I will still disagree with him.

"It is not personal between him and me. What he did is wrong ..."

"I have tried and tried ..." but Najib wouldn't listen.

If this is the tone of the message, forget that this is merely an act to prop up Najib.

Rafizi was telling his people to not get caught. It could be Tun shielding attention from opposition and setting the ball for Najib to spike.

It was after this meeting that Tun M repeated "feeling alone" [read here and here].

He could be slighted by the heavy opposition-like criticism against him from a certain pro-UMNO cybertrooper, the new JASA team under Dr Puad Zarkashi, and allegedly Dato Habibur Rahman-orchestrated mainstream media onslaught.

That brought a teasing assurance from Tan Sri Muhyiddin.

While it was not on the subject of his dispute with Najib, it was spinned conveniently along the conspiracy of Muhyiddin seizing power. That accusation is a convenience as the most likely to benefit from a Najib resignation.

Actually, the attack on Tun M only made him stronger and attracted much support and sympathy. Though one reporter estimated that at best Tun M's support from the Ketua Bahagian is 30%, he is comfortable where he is.


That only made many feeling alone.

On one side, some are still trying to understand whether it is a real fight. General election is drawing near and time is opportunistic for BN to get their act together but now UMNO has an internal fight between Najib and Tun M.

The sense of frustration can be heard from the active party workers and volunteers. Some felt that other than Najib, there is no better choice.

Muhyiddin should be a natural replacement in the UMNO tradition but he is handicapped by his age, exposure and lacking in political support within UMNO. One Johorean still fresh with his grouses against Muhyiddin during his MB-ship said his skeletons will turn up. It could make him a weak UMNO President.

Let us not even discuss Dato Dr Zahid Hamidi, or Dato Hishamuddin or Dato Shafie Apdal. Khairy has to wait till he has experience beyond heading a Ministry for Sports and Youth. Dato Mukhriz has yet to strengthen his foothold in UMNO.

As it is, the Tun M fanatics and pro-Najibs are already at each others' throat. It is the Tun M supporters that have been helping Najib are feeling lonely and in a dilemma.

They appreciate and agree with the issues by Tun M on poor GE13 campaign strategy and execution, Malay neglect issues, breakdown of the civil service, Pemandu, Khazanah, etc. It was issues they may have expressed with Tun M but was then responded with a "can't be me still toppling PMs" answer.

However, there was a shock reaction when Tun M raised the issue of Sirul [read here]. It was a politically motivated attempt by PAS's Dato Mahfuz Omar but was shot down by the keyboard warriors.

In Tun M's posting [read here and here], he explained feeling sympathetic towards Sirul and replied to the various allegations hurled at him.

And, there was a view that Tun M was repeating the same projects in his attack against Pak Lah.

From the beginning, Tun M was asking Najib to answer issues raised by the public and that raised by  opposition but gaining attention of UMNO grassroot. Najib answered on TV and he did left some questions and issues unanswered. It only brought more criticism. [read here]

The TV was not well planned. For 45 minutes, there was only so much that can be covered. Wonder who was the idiot that insisted Hamdan Ahamu take up time with condolence for late JJ?

The UMNO reaction to Tun M was generic and predictably old school. The stream of support does not divert public attention from the need to answer. This the new millenium, the second decade of new millenium. The least it could have been done was to use different tricks. [read Tun M comment here]

After the interview by Najib, there were appreciative response. Najib had explained or at least touch base with all aspect of the issues raised. Some felt the differences between Tun M and Najib were merely different leaders for different era with different environment and challenges.

Tun M fanatics insist Najib did not answer the pertinent questions. That only convince more to side with Tun M.

However, the question remains as to what then are the issue/s that warrants Tun M to insist on Najib's removal. As Tun M wrote [read here], it was not the crooked bridge.

Tun M was unhappy with the double tracking but that was Pak Lah's cardinal mistake. Malay issues was only raised after the bloggers' meeting. GST and BR1M looked to be side issues because it is difference of economic management philosophy. However, knowing Tun M, it has it's relevance and serve to reinforce a more significant message.

One supporter of Tun M alerted us that before April 24th, there will be a bomb released. That is only a day before Tun M will be reappearing at Kelab Taman Melawati (now called the K Klub). It was at this club that Tun M started his fight that brought down Pak Lah. Only this time the faces are different. Raja Petra is in London. Zaharin Yassin is batting for Najib.

The same kedai kopi gang that started it then has evolved. After changing venues from the Mahbol in Taman Tun Dr Ismail then Kayu in Kota Damansara, it is now comfortably residing at Nagas next to PWTC. Conveniently the gang is now called Parlimen Nagas and have a Facebook.

The expected bomb was dropped yesterday and the issue was on 1MDB [read here].

He said there is an unexplained RM27 billion that disappeared. Though more accounting details need to be looked into, that simplistic accounting salient point will be a useful crying call for Tun M. It stopped the complain and grumbling of Tun M getting personal by implicating Datin Seri Rosmah.

He also confidently acknowledged the day earlier allegation by Sarawak Report that account document for BSI is a fake. If the Sarawak Report is true, it may lead to the suspicion that the second tranche of money from the Petrosaudi investment was absconded.

FMT analysed the 1MDB issues raised by Tun M's [read here]. By the look of it, the straw that broke the camel's back has to be 1MDB.

One media practitioner had a private close door discussion with 1MDB's first CEO, Dato Shahrol back in 2009 in Concorde KL. He said Shahrol was told point blank that the manner they are operating were strange and unconventional. Someone present told him that 1MDB can bring Najib down.

Will he be brought down? 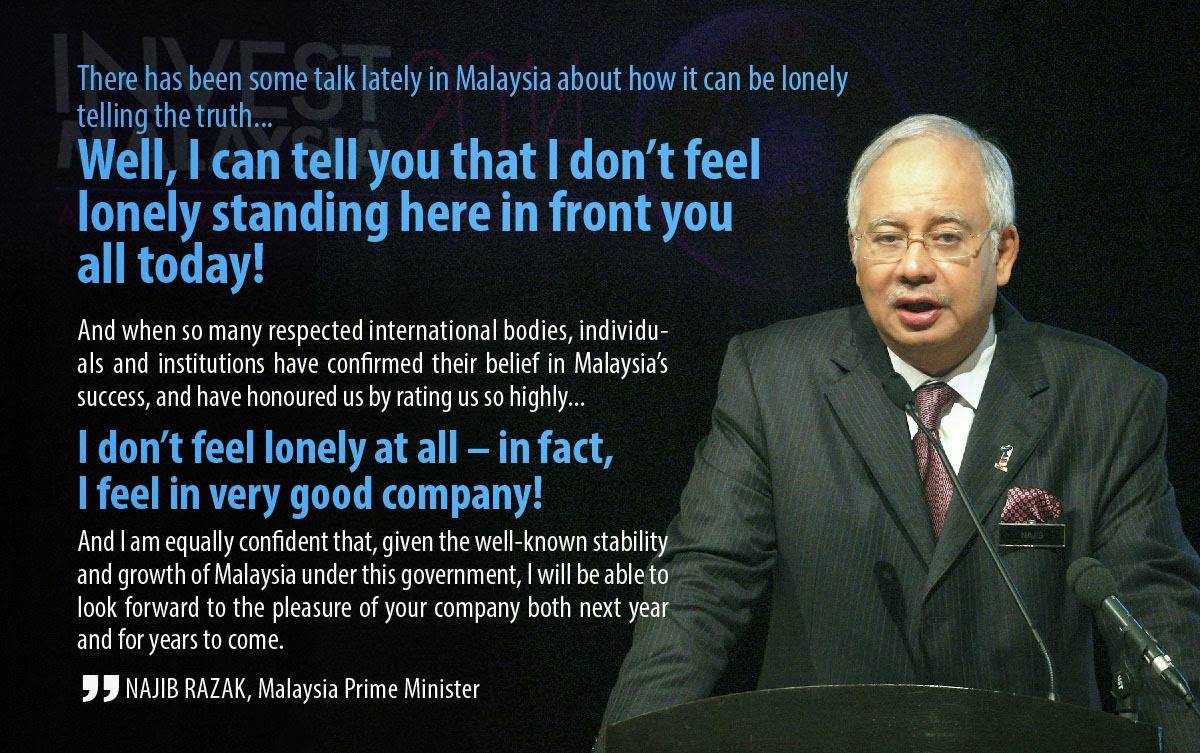 At the Invest Malaysia conference, Najib said he is not alone. He has the support to implement his plans and expressed confidence with the Malaysian economy.

Someone was saying he will be explaining the 1MDB issue in detail soon. It is a matter of a week or two. Heard also there will be a bomb to be exploded by the Najib side but it will not be blowing anyone, last a Mongolian or an explosive blog posting by anyone.

With yesterday's posting by Tun M, it looks like "tiada lagi sinar harapan" between both of them. Historically, the UMNO President will likely survive with 70% of Division Head still loyal to party leadership.

However, when 30% are dissatisfied and Tun M is heading the fight to try bring down the 70% support, it will be a showdown. Maybe the showdown will be at the next party election in 2016. But maybe not that long.

Whatever is the outcome, the concern is what will happen to UMNO after the showdown? That question only made many rethink before taking sides.

Tun M is just saying what the silent majority of the Rakyat feels about him. He no longer has the trust of the Rakyat (forget about the 70% donkeys that will change anytime a new leader comes to town). Put Najib ears to the ground and he will hear the rejection of Rakyat. It will difficult to lead when people that you lead no longer trust you. Don't let the silence Rakyat show their disgust like what happen in Mesir and rest of Arab countries.

is there something that rakyat tidak di beritahu?

Anon!
Do you even understand what the Arab Spring was all about? And you call others donkeys?!

Najib will not be able to defend the scandals of 1MDB. As a diversion, he will opt for show of support from Umno dunggus. Najib will then stupidly says, 'I still have the support of the party and Malay people'.