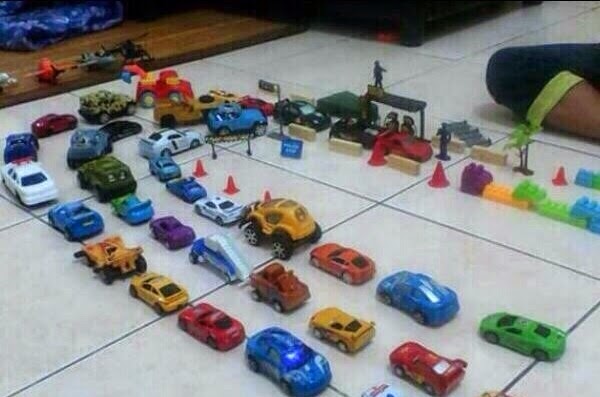 Early yesterday morning a friend sent a message alerting of a massive traffic jam in the direction to  Putrajaya and KLIA. The message mentioned the existence of army checkpoints and intensive search.

Innocently, the message was forwarded into our Alumni Whass App group. There was a reaction that speculated the possibility of a catastrophe. Another speculated #KitaLawan did a demonstration inside Putrajaya. An auntie was worried of her niece living in Putarajaya.

So there was a request to get updated. When an update came in, it turned out to be the picture above. Upon forwarding it, we were naturally accused of pulling a belated April fool prank.

By late noon, another message came in with a more serious note:

Members of the WA group was posting well wishes and prayers for the Melaka CM. The list was long. Right after the helicopter incident that caused the death of Tan Sri Dr Jamaluddin Jarjis, Dato Azlin Alias and 4 others (Al Fatihah!) and Pak Ibrahim's (Anwar's father), suddenly there is another .

Without giving much thought, we forwarded it to our Alumni WA group. Same thoughtful reaction.

Not too long later, Melaka CM office issued a statement and it reached our WA group: 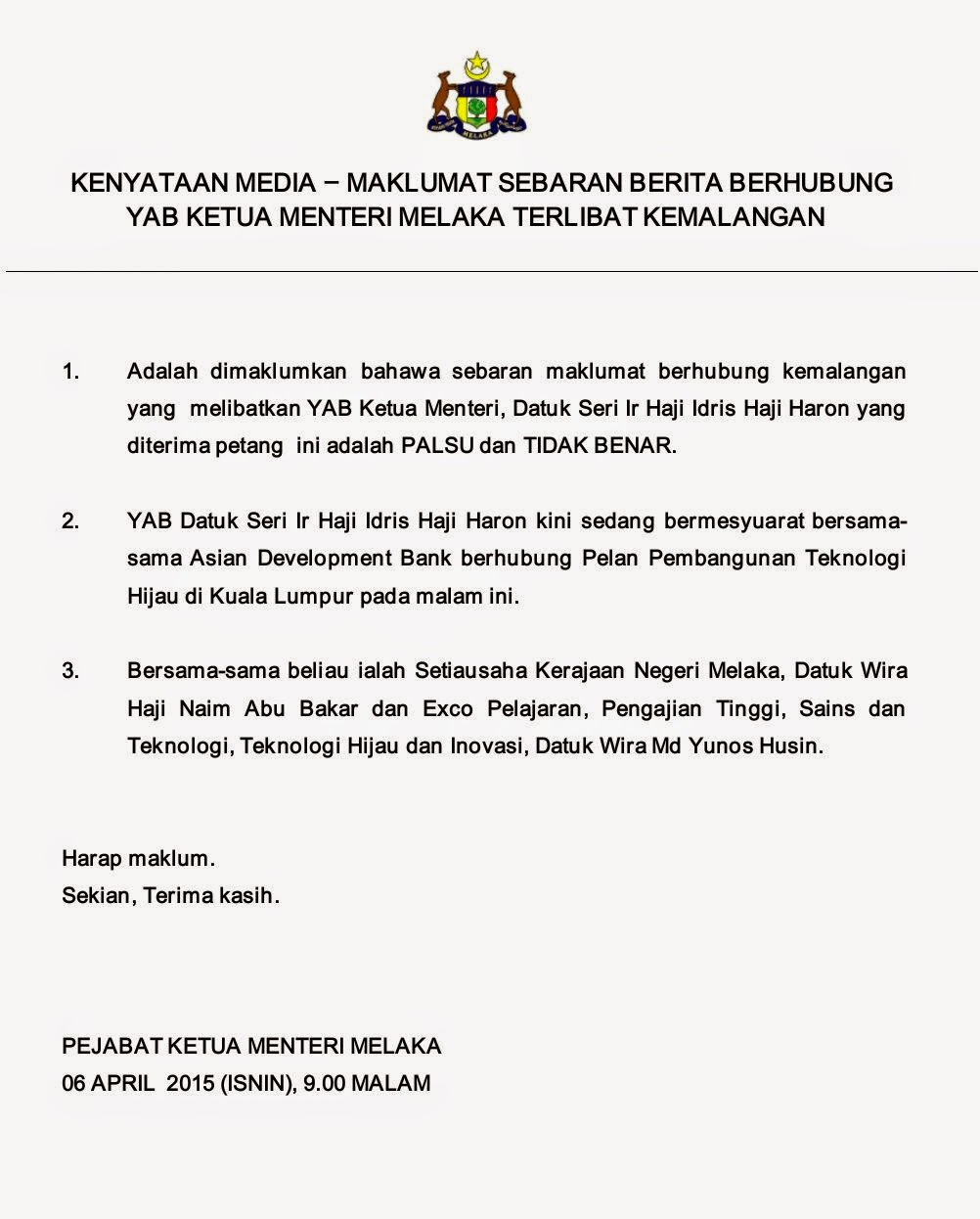 It turned out that it was a bunting of the Melaka CM that was knocked down by a van: 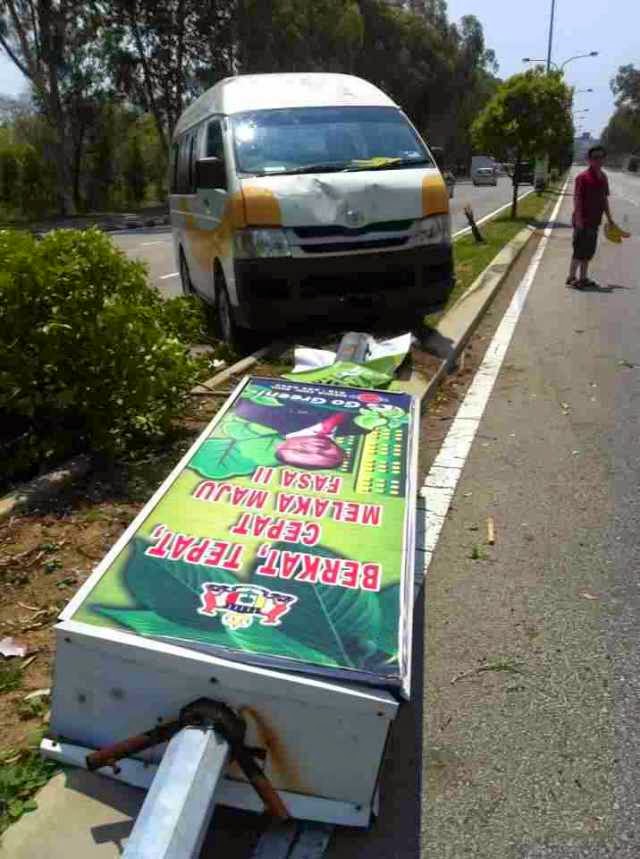 By the look of it, the "CM" is not in a 50-50 condition but completely damaged. So we forwarded both the images to the chagrin of friends and admitted we had been had too.

It must have been a days of pranks. Then came another picture: 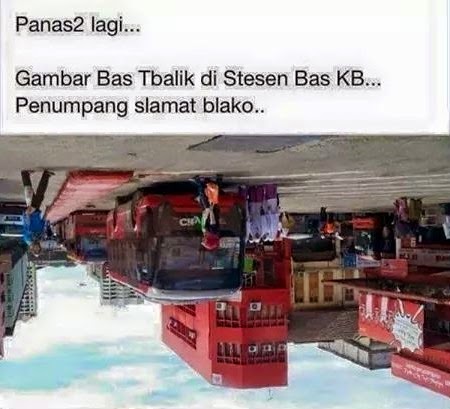 If there is anything that can be learned from these pictures, it would be that the public is so dependent on getting those early newsbreak from social media that they are easily duped by false news.

Cautions by Information Minister, Dato Ahmad Shaberry Cheek and Sarawak CM, Tan Sri Adenan Satem sometime ago on the reliability of information on the social media is most relevant and should  be taken seriously.

Judging from the arguments on issues by most Malaysians, including the educated and learned ones, the sufficient ground to indicate Malaysians are not scrutinising the information they received and is strongly influenced by the social media.

The recent The Malaysian Insider (TMI) report claiming the Council of Rulers rejected hudud law by Kelantan comes to mind. [Read it here].

There was police report made by the Council of Rulers. Editors, Chief Editors and Managing Editors were picked up by police.

The usual suspects of NUJ, CIJ, Bar Council, Opposition leaders and UMNO's Saifuddin Abdullah and Nurjazlan calling it a crackdown on freedom of the press. Was there Marina Mahathir?

Dato Huan Cheng Guan came out to rebut on the ground that media freedom is not a license to fabricate lies and law has to be respected. 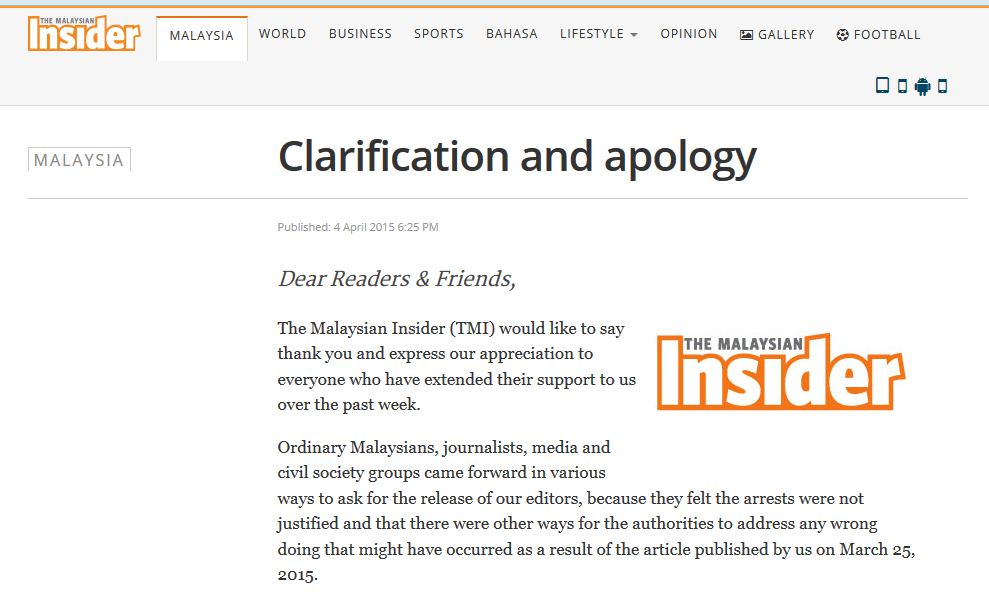 They admitted that it was based on a yet to confirm tip off. For that this blog does that too BUT we tell it as a tip off and undisclosed source, but not as a confidently claim it as the truth. And they claimed they immediately reported another news which does not confirm their reported news.

TMI complained why no report was made against other media which only means to shrugged off from responsibility. In the posting, there was no commitment to take extra care to not do it again.

Most likely the clarification and apology was made to appease MCMC and police.


Do we forgive them and just take it as another belated April Fool prank? If it is a mistake or even a fun prank, why not smile and just forget about it?

The fact that there are police reports made only shows there are people out there that did not see it as prank.

For TMI, this is neither the first time nor a mistake. They are a known repeat offender and as Helen Ang puts it, "are congenial liars". They did a number on PMO, Hishamuddin, Muhyiddin and Mukhriz, and Haji Hadi.

Their role is clearly to intentionally spin, redirect public discussion on issue, make a mountain out of molehill and fabricate false news for a clear opposition political objective to smear the public image of government of the day.


TMI does this sleight-of-hand consistently and in the most brazen, unscrupulous manner but yet Umno has never called them out.

Najib once complained that BN has lost the war of perception. But of course. The BN is no match for the sneaky bastards plus the BN is constantly being backstabbed by the media conglomerate owned by one of the coalition components. 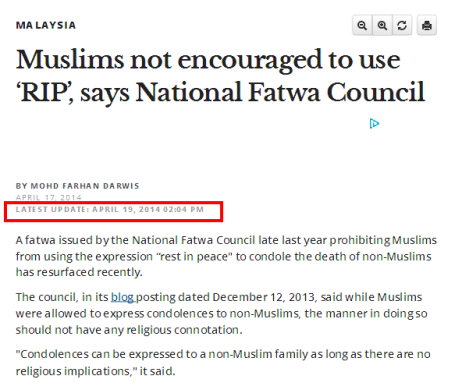 The sleight of hand done on Council of Rulers was noticed immediately but the public outcry they made on the religious authorities on a non-existence fatwa that allegedly forbid saying rest in peace on the death of Karpal Singh was left unnoticed.

In an April 2014 posting here, Helen Ang wrote of this;


Malaysian Insider is again driving a wedge between Muslims and non Muslims and creating hatred against the Islamic authorities and distorting facts,” wrote blogger Ellese last year on 18 April 2014.


“Hours after the death of Karpal Singh, Muslims were told by the National Fatwa Council today they were not encouraged to use the phrase ‘Rest in Peace’ (RIP) to a non-Muslim because the term had Christian connotations.”

“This is a blatant lie to incite unjustified hatred,” said Ellese. “They purposely gave a false impression that the majlis fatwa is somewhat targeting against those wishing farewell for Karpal. Really blatant lie.”

Not only an apology is insufficient, someone should make a police report against TMI on the RIP fatwa and expose many more of their devious work.

TMI only appreciate firmness as demonstrated by Tan Sri Tajuddin Ramli, Mukhriz and Khazanah Nasional. [Read Helen Ang again here]. MCMC and police should not be so nicey nicey with them. 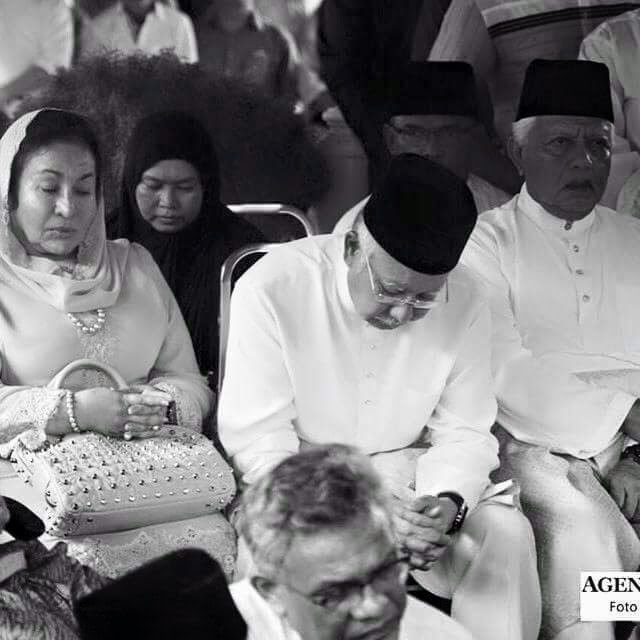 On a different but current issue, note Dato Abdul Kadir Jasin's comment below:


3. Mohd Najib might not have played a key role in forcing Pak Lah to resign. But he must have learned a few lessons to avoid Pak Lah’s pitfalls. Mohd Najib has an ambitious determined wife who would want him to stay at all costs. On the other hand, Pak Lah’s wife, (Tun) Jeanne, is not ambitious woman and it was said that she urged him to resign.

Nothing seriously wrong with the non-quantitative political analysis. Social analysis is always subjective. It only meets the description of the term Appurtenent in psywar strategy.

TMI twisted Shahrir's words from najib will answer to najib must answer.