Is Hishamuddin distancing himself from Najib? 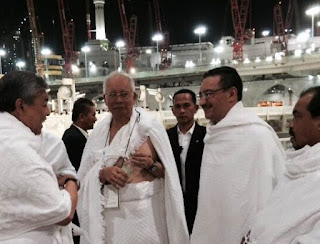 Yes, Dato Hishamuddin Hussein Onn is together in the entourage with Prime Minister, Dato Najib Tun Abdul Razak to Saudi Arabia. But that is in his capacity as Defense Minister. Malaysia is in the Northern Thunder military exercise.

Politically, Hishamuddin seemed to distance himself from Dato Najib in the same manner he distanced himself when Najib and his wife were under a barrage of slanderous attack on Altantunya-Perimeker affair towards the end of Tun Abdullah's premiership.

He only started to throw the 'cousin brother' term around when Najib finally became Prime Minister. It was said he could hardly be seen at Sri Satria, official residence of the Deputy Prime Minister those days.

Fine, the knife would be out if he is seen too cousin-cousin with Najib and not giving Pak Lah the respect then. But why is he is still distancing himself now that Najib is PM and in need of support? 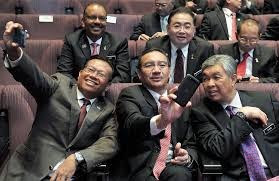 UMNO Pagoh accused Hishamuddin asthe acting Chairman assigned to set-up the suspension of Tan Sri Muhyiddin. Hishamuddin rattled and was too quick with his denial and to tai chi it as consensual decision that was discussed at length. Rather tame and defensive answer.

Dato Nazri Aziz is more committed to defend Najib than Hishamuddin. He was reported saying, "Right or wrong, I stood by my leader". Same admirable quality seen in Dato Aminuddin Omar's defense of Dato Mukhriz.

Tan Sri Sanusi Janudi always spoke of loyalty as one of the quality found in the ethos of the Japanese, German, Indonesian and Korean that made them proud and great races.

It is quite understandable as a Prime Minister aspirant for Hishamuddin to be concerned with his political path. It is heard he could face quite a challenge in defending his Vice Presidency, let alone attain the first Vice President position.

He could be concerned with Dato Khaled Nordin. In the last party election, Khaled was bitter with the unfair campaign restriction imposed.

This time he could block the Johor voting block from Hishamuddin since Johor cannot be seen to endorse two Johoreans. It would offend other state UMNOs and both Johor candidates will lose out.

Johor is another hot-bed of dissent against Najib though thin and dispersed. That explains Khaled's current posturing which is contrary to his mentor, Tan Sri Shahrir Samad's commitment to second cousin Najib.

If the Johor block is only with Khaled, Hishamuddin will find it tough to negotiate with the major block like Sabah. For one, Sabah will not only want a replacement for Shafie, but also may have expectation that the Sabah VP be the first VP.

Sabah is the steadiest state for UMNO. Their leaders and people are the staunchest defender of Najib. One of the Aman brothers deserve the first VP or/and the position of DPM II to represent Sabah and Sarawak.

Sabah grassroot openly warm up to Dato Dr Ahmad Zahid Hamidi but not quite to Hishamuddin.

Despite explanations, they are still blaming Hishamuddin for failure to make decision at Lahad Datu. The security situation in Sabah is still delicate and Hishamuddin is still getting the blame.

If that is not enough, Hishamuddin only managed to scrap past Mukhriz's ragtag campaign team by 10 votes with open support of His Highness the Sultan of Johor. This time, Sultan could be backing Khaled.

The Sultan factor could be useful for the block vote. Khaled is in the position to do horse trading with other states.

With Johor grassroot rather emotional with the perceived unfair treatment on Muhyiddin and need more than conspiracy theory to cool off the hot heads, it could be the reason Hishamuddin is distancing himself from cousin brother.

Hishamuddin can only rely on Dato Dr Zambery Kadir for Perak's fragmented votes, and may still rely on Najib's directive and royal support from Johor and Pahang to scrap through.

If Dato Ismail Sabri join in the fray, Pahang may have to put aside their in-law and go for the son of Pahang. Hishamuddin will need a lot of convincing by his father in law to get another open support from Sultan of Pahang.

There is also Khairy Jamaluddin to contend with. Both Hishamuddin and KJ is heard to be part of a tag team but both will be competing for the tough two remaining VP slots.

Many other leaders are heard to join the race, including Dato Mustapha Mohamed and rather far fetch now, Mukhriz.

What happens if delegates decide to allocate a VP quota for MB in view of the grassroot wave? Then it will be a competition for one place. Doubt Hishamuddin and KJ should trust each other. 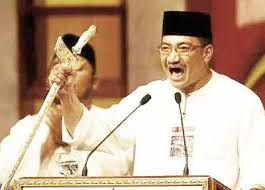 It is quiet a predicament for the Hishamuddin whose often painted as lacking decisiveness and averse to decisions.

In the midst of the 1MDB debacle, Hishamuddin had then made a joint statement position together with Muhyiddin and Shafie.

He even gave Najib three conditions on 1MDB for his support. That was sufficient for some to see him as distancing himself from Najib.

And Hishamuddin has long been very quiet and not in his usual wide mouth. It is better but now interpreted wrongly. Cakap salah, tidak cakap salah.

With Tun Mahathir's declaration to leave UMNO and form a coalition with opposition, Hishamuddin cannot be non-committal. The indicator for the opposition strength is the March 27th gathering organised by Dato Zaid Ibrahim, which will be prior to the Sarawak state election,

Mahathir may lack capable lieutenents like before and was said to handle the campaign himself. GKCM is only few and need massive build-up. Thus the move to form a coalition could fill-up that shortcoming.

He does not have the position of power but he has political influence. Unfortunately, he has to bow to opposition.

UMNO should realise that Mahathir's presence with the other side could blunt UMNO and BN's predictable script to attack opposition.

Since GE 12, there have been a trend in the voters profile that is moving voting power to the younger population. Mahathir may capture their imagination and the prosperous past will be the dream selling that appeals to them in the light of the present challenging economic condition.

UMNO is not in the position to discard the warlords and put up more younger faces. The removal of Mukhriz will be used to the hilt to show UMNO's reluctance to change. 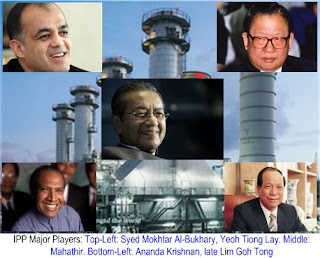 Mahathir's challenge come with money, something the opposition coalition have limitation in the past. His corporate backers have held back donation to UMNO in the past election and saving up for the boss since the meeting of taukeh IPP with Mahathir in Argentina many years back.

He is willing to pay for more clowns other than Dato Khairuddin Abu Hasan and Anina. Some taukeh judi are willing to pay some of his diehards monthly salary in the tens of thousands.

So it is rather pitiful to see proTun cybertroopers voluntarily stalking pro-Najib bloggers and facebookers as "makan dedak" and lawyers being paid pittance but there are those earning big money.

Mahathir's only challenge will be to appease DAP.  He is backing Azmin and said to believe him as a potential PM. But, DAP wants to chop off Azmin in Selangor and ready to seize control of Selangor. They have readied a "boneka Melayu" as MB in Prof Aziz Bari.

Lim Kit Siang is already 75 and waited long enough. He has taste blood at the tip of his tongue and is not in the mood to compromise with a "losing" Mahathir.

Mahathir is willing to do anything to not ever lose a political battle. To what extent Mahathir have come to term with DAP, it is not known.

What constitutional compromise was made on the rights and interest of the Malays, Islam and Bumiputera? Perkasa dare not complain on Mahathir. Too many pentaksub inside to even ponder this possibility.

UMNO and former Semangat 46 have an old score to settle on Mahathir in this area of compromising to Chinese tycoon interest, including taukeh IPP Cina. Opposition will fire back to say UMNO have not got Malays out of poverty and continue to keep them in a state of dependence out of political expediency.

There will be the Melayu Liberal and Islam Liberal debate to contend with, in which PAS may have an interest to defend their ideals for Islamic state and hudud.

The debate and campaign could be intense and the likes of Hishamuddin and KJ cannot be non-committal and continue to remain as by-stander.

Can sense some intellectually challenged Hishamuddin supporters to misread this posting and make premature conclusion.

The simple for the man on the street message is Hishamuddin have to buck up and come forward. The nation is ready to bury the aristocratic class should they fail to provide the desired leadership.

Having their boys and bloggers doing covert attack on Zahid and Najib does not serve the current party interest. Personal politics have to stop. Wayward operatives chop off the payroll.

The more in-depth message will be left to readers' analysis.

Hi Voicey. Okay la, I'm a softie :) But, with all due respect, I just don't believe in Umno throwing out just about everyone who disagree with the leadership. There are still those who are like that but still love the party and want to continue to support Umno and BN in the next general election. If they are thrown out, then it's a loss. That's how I see it and due to that I have to disagree with the "either you are with us or against us" dogma. Thank you.

Hishamudin is a gone case la bro... he will go down the drain together with najib.. sooner or later.

Hishamuddin also like Jibby no egg....remember the "keris" incident...and no vision at all. You can see whatever things he touch will go loose...eg. classic case ATM & PDRM football team...
KJ also the same~play safe similar approach like Jibby during his time and remember the money politic case during Pak Tidola time...guilty but NFA....
The rests no quality at all to become our leader...all grass n cow head
Z.Komidie - oooooooportunis....shld be a cartoonist....
We Malaysian peoples only value whose leadership style similar/at least like Tun M (proud to be Malaysian), in which we dun see anyone in UntukMohdNajibOnly party.
The whole UMNO leadership need to be thrown out.

We love UMNO, like Muhyiddin said is true, there is no wrong with the party but the corrupted leaders inside...

I was informed that he still gets advice from the boy from umno subang. That should expedite his downfall.

its very unislamic to stand by your leader even if you know that he is wrong.

Hehe... your message reached him. Messenger papagomo and parpukari. Credible messengers hisham have.

It is unislamic to slander, twist and lie together with believing it. Proof wrong doing. Not just speculate and hunches.

Speculating on cover-up is not proof as it can be easily thrown out of court. Proof the wrongdoing and not conspiracy story of cover-up.

For your conspiracy there is also the other side.