Why didn't Daim appear in person to sign the Citizens' Declaration? 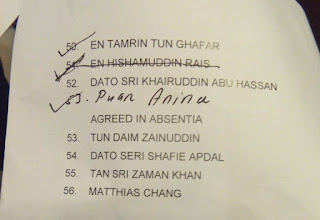 This image viral in the social media. It shows the name of Hishamuddin Rais strucked out from the signatory to the Citizens' Declaration announced by Tun Dr Mahathir.

Four names were mentioned as "agreed in absentia".

Tun M's loyal former Political Secretary, Mathias Chang may have agreed though in absent. However, Tan Sri Zaman Khan has made statement denying that he agreed. Maybe he will not be caught dead signing something together with Lim Kit Siang.

His fellow Kelantanis, Tengku Razaleigh Hamzah was expected to attend and sign but he did not, thus left Dato Ibrahim Ali stranded at the Cafe downstairs with Ku Li's conspiracy fabricators whose theories for decades have never materialised.

Though Dato Shafie Apdal is in the list, one cannot assume he is agreeable. So the question, did Tun Daim agreed in absence?

Most UMNO people spoken do not believe he is involved.

Even though many conspiracy theories have been spun of his involvement, they say he is a businessman and not a politician. It is not to his interest to fight with anybody - be it the BN government or DAP-led Pakatan Harapan government.

Daim may have made comments on 1MDB or certain policies of government, which is fine to Dato Najib, but till he is seen present, it cannot be assumed. 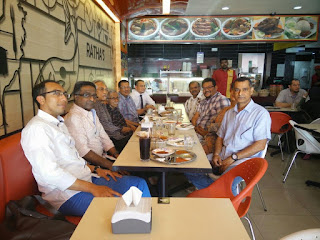 Just because pictures of Tun Daim with various people have viral since published by Geng Loceng in their blog, it means nothing.

That breakfast get-to-gather had existed long before Tun M's onslaught on 1MDB and Najib. Many joined and left since Geng Loceng's presence. The photo was published by Geng Loceng to deceive the public and create a certain perception.

Never ever trust the Geng Loceng. A common heard joke says that in Myanmar, they kill Geng Loceng first before venomous snake. Please do not have racist perception.

The thing about the Citizens' Declaration is that it is a political ploy, or more accurately a political campaign. Political rhetorics and cliches are already coming from the interested "UMNO" players.

Tun M ignored the explanation given and politicised the OSA of Auditor's Report. Maybe it failed his 5 Tan Sri conspiracy, wallahu alam. As far as the practise, materials presented at PAC are OSA.

That is why are our mole in PAC back then dare not give a copy of the ECM Libra-Avenue hearing presentations many years ago. Lim Sian See has answered the issue in his FB before Tun M wrote of it and he made a long rebuttal of his latest posting here.

Though majority in UMNO has branded him as "opposition", his in-denial statement is still UMNO in style. How could he be so optimistic when many political columnists are calling the grouping involved in the Citizens' Declaration as strange bedfellows?

It does not take a week before Charles Santiago of DAP criticised Tun M. He is basically saying he cannot accept the coalition and said the rot started with Tun M.

Wan Azizah degraded him to say yesterday that Mahathir has lost so PKR gave him a platform to speak. So the previous posting to say the declaration is about Tun M and hardly about rakyat or Pakatan Rakyat (now under new grouping without PAS as Pakatan Harapan).

She also said the Citizens' Declaration by Tun M is admittance of the cruelty against her husband, Dato Seri Anwar Ibrahim.

Obviously, Tun M is aware that PKR and the reformasi movement is about their opposition to him. And, Azmin Ali and Lim Kit Siang is asking the public to see the bigger picture of reform and let bygone be bygone. 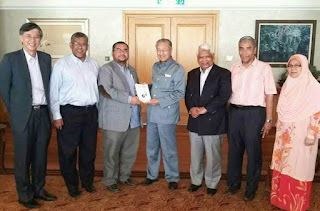 In the meeting with opposition leaders prior to Tun M's announcement of leaving UMNO (see picture), he told those present that there must be a reform to change the political landscape in Malaysia away from the politicians and political party.

In trying to get those opposition leaders present to buy-in to his bizarre move to align with the opposition, he said the power must go back to the people via NGO.

Not many knows what transpired in the meeting, including some dumb ass reporter that have been going around quoting Dr Mariah's response to her enquiry that it is only a presentation of the book by Mujahid Yusof Rawa.

It is not a bad idea really.

It is something yours truly have long dreamt of to happen. But there is more to it for Malaysia whose still not politically matured and appreciate the responsibility that comes with freedom of speech, press and expression.

An activist by the name of Gayathry Venkiteswaran disagreed in her letter to FMT, "Why I will not sign the Citizens’ Declaration". Extract below:


I expect political parties to make negotiations and compromises, sometimes wrongly, but they do have a constituency and I do believe in the power of the elections, through which I can tell them what I think.

Now, with NGOs, it’s another story. To whom are they accountable? How can they be effective checks and balances if they sit at the same table, not to discuss implementation of reforms, but merely to offer legitimacy to what I think is an undemocratic group? You can’t be leaders of influential movements and then claim to be only individuals in this political move.

Of course, I acknowledge that we are not forced to sign the declaration so why make all the noise: but NGOs cannot make political decisions and expect not to be criticised, especially if supporters feel they have acted with little accountability.

And she went on to give her four reasons here.

She reminded that Ambiga used to say, "Mahathir has taken them for a ride". Her words to Ambiga was: “We are not that stupid” – my response, to those who feel they have to lecture us on the bad situation of the country.

Speaking of the devil, Kadir Jasin posted this here.


... till Daim make his presence and give his official statement of support, ....

... till the proof of Najib's wrongdoing is shown by Tun M himself (instead of endless doubt raising questions and political style accusations), ...

... till someone from MACC or BNM or Police or AG openly say what is convincingly and specifically wrong, without attempt to create perception to influence public opinion, ...

... till it is truly credible media (neither Sarawak Report nor Rupert Murdoch is acceptable) that is reporting, ...

... till it is discussed without politicians' political motivation for power, ....

... till stupid, shallow and unschooled spin like this one here is not given publicity, and ...

...till public discourse in not accusation based issues not directly related and unqualified as proof in the court of law on the alleged wrongdoings, ...

... THEN it is all a wayang to oust the Prime Minister undemocratically for the personal power and wealth interest of each and every one involved, particularly of the stateman!

This grouping is unrealistic and will implode just like Pakatan Rakyat imploded. The question from our previous posting is: What has Tun M compromised to get DAP's support and confidence?

Quite sure the proTun will be in denial as much as their answers were shallow and in-denial to why Tun M is together with DAP. They can't and do not have an un-debatable answer.
at 3/08/2016 03:43:00 PM

Anonymous said...
This comment has been removed by a blog administrator.
4:19 PM

I believe a bit in numerology. Last time I checked a book on numerology, it foretold years in advance that, based on their birth dates, Anwar Ibrahim could never outmanoeuvre Dr Mahathir Mohamad. Today I read somewhere that there were 58 activists who attended the ANC rally that day. So if based on numerology, 58 (where 5 plus 8 adds up to 13) is a very unlucky number. Haha! Someone should have checked and made sure that only 57 or 56 agitators were present at the ANC meeting. 57 equals to 12, which under the beliefs on Indian numerology, is God's number. 56, which equals 11, is also a good number. So looks like the number is up for these desperate politicians!

So daim or no daim, it doesnt matter. Wake up and cheers bro

Thoher Yunos said...
This comment has been removed by a blog administrator.
9:45 PM

Anonymous said...
This comment has been removed by a blog administrator.
11:08 PM

Your opening line was "UMNO champion Islam but PM's son busy partying in Zouk". Suggest you stop reading this blog because you have no perspective of issues. The rest of your comments are unclear on where you are heading or what does it got to do with the subject of this posting.

So there is a recession. Is this the first time the country underwent a recession and hard decisions had to be made? It was as bad or if not worse. You are probably to young to have the right historical perspective.

Please be clear on what you wanna say. If not, do not need to comment.

You said blah blah FB this, comment blog that ...

Just based on that it is incredible that you assume it is substantive enough to conclude as fact that "semua rakyat Malaysia sudah fed up dengan najib".

Furthermore, you conclude "So daim or no daim, it doesnt matter." Sounds familiar and shallow. Full of presumptions and dilutely argued.

Next time do yourself a favour by sticking to your own kind on FB. You understand each other better and can assume you have are clever.

Don't waste your time on trolls doing character attack. These protuns aren't able to articulate themselves any more than their cheap dedak character assasination. They want their comments published to rosak your blog only. Delete saje bro.

Anonymous said...
This comment has been removed by a blog administrator.
7:22 AM

The fact that fb and comments in tun m's blog are criticising najib only indicate that protun are blindly following tun and do not bother to see any other point of views. That is where they congregate thus it is an unreasonable expectation to hope they support najib.

It takes more than fb and blog comments to confirm semua rakyat fed up dgn najib. Even if najib led bn lose the general election, it is impossible to get a zero defect "semua rakyat" reject najib. He could still gain reasonable number of votes.

Anonymous said...
This comment has been removed by a blog administrator.
8:08 AM

Anonymous said...
This comment has been removed by a blog administrator.
9:10 AM

I think this is stupid statement. Only pekan vote najib. The rest vote their own wakil rakyat. Many factors to consider to evaluate how much hatred the citizens to PM but thru General election not one of it.

Every posting has a subject matter. We are never and should not be subject of discussion. Talking about us or our opinion only divert attention from subject.

Plse understand the rule of commenting here. No compromise there even if no comments are coming or allowed release. We are fine.

Theology or religion or general morality is not postung subject too.