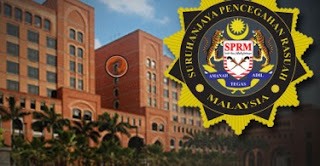 It does not matter whether it favours Lim Guan Eng or Dato Abdul Rahman Dahlan to cancel the debate.

The long and short story is it is subjudice to the investigation to have the debate. One can refer to Section 29 (4) of the MACC Act 2009 here.

Both of them are still dishing their last word. Better stop or they could end up in the same cell together. Then they can debate without any interference from authorities.

However, there is no audience to hear Rahman's unanswered issues. Guan Eng side had plan to play up on a Rahman error on the per sq feet of land value vis-a-vis property value. Frankly, it serve no purpose because there will be grandstanding.

The concern now is the mistrust against MACC has culminated to what seemed to be an act of "marah nyamuk bakar kelambu". Suspicion of special treatment to Guan Eng cannot be the reason to destroy this important institution.

After the incident of an MACC Director taken picture together with opposition, MACC cannot continue to be oblivious and insensitive to public sentiment.

The public reaction to MACC officials call to stop public debate is now responded with questions as to why the silent to trumpet blowing by Tun Dr Mahathir, Lim Kit Siang, Tony Pua and Rafizi on 1MDB.

Believe Tan Sri Abu Kassim did express caution. Guess it is no good to point that out now.

Allegation that MACC was behind the leak to Sarawak Report and WSJ and the fake charge sheet is still pretty much at large.

And, it is a situation of damn if I do and damn if I don't deny for MACC. Some would not believe any denials and it would just attract attention. 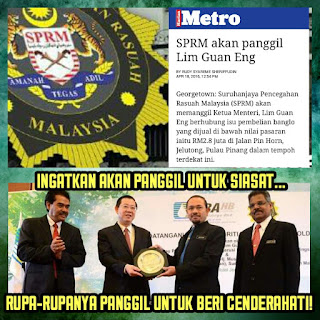 But, why in heaven should he deliver the Certificate of Integrity to Guan Eng. The Edge reported it here.

Firstly, it made MACC a laughing stock: 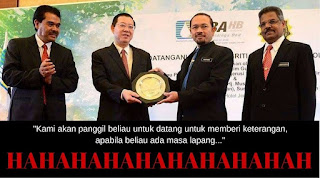 Secondly, it is in poor taste to hear Guan Eng talk of integrity. Furthermore, it was fodder for Guan Eng to be his cocky self:

They should have insisted it be not Guan Eng. If he goes off scot free, MACC is fried!

As a result of increasing scepticism, there are allegations that the CIP is a scam to create opportunity for MACC officers and their friends.

The claim is the Chief Integrity Officer (CIO)s are fairly well paid position that could earn RM30,00 a month, thus jobs for the boys.

The publicise Solat Hajat by MACC last year is now made fun off. An MACC officer then boldly said, "You ada kuasa, saya ada tuhan." Should have exercise some restrint.

An old but anonymous blog, Masterdedah accused an MACC officer for attempting to clean up evidence for Guan Eng. After it was denied and the officer admitted guilty in court, new allegations of cover-up and attempt to hide surface.

This is not good. Lying, spinning, slandering together with unsubstantiated allegation is a wrong.

The case against Guan Eng is close to completion. Procedures have been applied. He did not get special treatment.

If RPK could establish the link between Pang Li Koon and Guan Eng via her boss, MACC should have no problem to do so.

Applying pressure could obstruct investigation, deny justice and backfire on PM. If they want Guan Eng's blood, the other side will want PM's blood.

Supporter of the current government should defend this important institution. It is not the first time institutions are abused by irresponsible officers or politicians.

But never has it come to the point where government supporters could destroying the institution.

Now that Tun Dr Mahathir is on their side, they do not have to raise it too loud. Ask the man himself.

To be fair to the supporters, MACC should accept their mistake for being seen as overzealous on the PM but being perceived to cover less relevant politicians like Dato Suhaimi Ibrahim. Which Thursday will he be charged, Mustafar?

If not for these supporters, MACC would be left undefended in facing the DAP onslaughts following the death of Teoh Beng Hock and Ahmad Sarbaini to cover the corrupt action of their political.operators.

At the end of it, MACC and other enforcement agencies should be professional and not involved themselves with any political agenda. They should do their job without fear or favour.

Presumably they do not fear politicians but is their attitude the same against their peers in the civil service?

The talk on the Youth and Sports Minister had been around for more than half a decade and this blog had hinted indirectly, but action seemed to take forever.

Anyone hear of actions by MACC on any top government officials? The level of KSU, for instance. Because the rumour is power abuse and corruption is rampant.

It is heard openly of Little Napoleans admitted being afraid to apply the law against their contemporary.

Corruption is equate with authority. The real authority lies with the civil servant. If civil servants are not corrupt, politicians or their spouses cannot line their pocket.

There lies the root cause.

Enforcement agency must be god fearing and unwavered by the big dollar of the corporation and GLCs.

Too much dirty money laundering circulating within the economy from corruption, illegal activities. It is unfair for honest hardworking citizens and competituve businessmen.

MACC must not be selective and defensive. They cannot be judge and jury to determine who they will investigate and who will be charge. They will be perceive as guilty for the same allegations levied against AG Apandi.

The tarnished reputation for the late opening of the Taman Manggis file is their own mistake. Thus they have to bear with the public scepticism.

If they have God on their side, they too must be clean and seen to be clean. They must not fell to the temptations of money, power and flesh.

The mosquitio net is important to keep the nation and government intact and functioning. That affects tens of million of rakyat.

Both side of the political divide should respect it.

MACC should not be playing games but be serious to ensure it's continous role. At the final analysis, it is not about just being right or wrong, clever or stupid, but wise in balancing everything to achieve what it set out to do.

The rakyat should set aside politics or other considerations to defend and support MACC.

I dont belive in SPRM anymore.. Go to hell... All The case which they investigate should be open again.. Something fishy is going on start from top to bottom...

i fully support SPRM but not some chief leading SPRM that have lacking integrity based on their own behavior in handling cases .. especially against opposition !!!