To debate or not to debate, MACC? 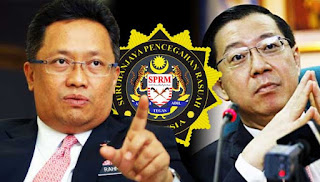 The Rahman Dahlan vs Lim Guan Eng debate is set for April 19th, next week. So stay tune to TV3 for next Tuesday night.

MACC has called on both parties to not proceed with the debate through a statement by the Chairman of the Special Committee on Corruption, Tan Sri Zahar Ujang.

It seems Tan Sri Abu Kassim is shunning away from making any public statement. It is sad that there is a perception that MACC is now #1 enemy of the state.

Hope the silence has got nothing to do with this posting here. It does not mean this blog stopped supporting MACC in their fight against corruption. Just like parents spank their kids because they love them, it is the same.

It is to make sure MACC do not go on the wrong path.

Out of political expediency, both sides seemed to ignore MACC's advice. It is wrong to have the debate since MACC Act 2009 stipulated in Section 29(4) below:

It is not good because both parties in the debate are in Government and Ministers. Both should respect the law and not do political theatrics outside the ambit of the law. They will be no better than Mahathir's democrazy ways.

After several exchanges of challenges, name callings and threat of backtracking, Guan Eng could not wiggled out any more. He may not want to respond to bloggers but DAP had to brave it out and insist he accept the challenge after Rahman Dahlan gave an open poser of 15 questions.

The 15 questions is leading to a conclusion that Guan Eng had allegedly and consciously purchased a bungalow for cheap in exchange for sale of a state land meant for low cost housing at below market price to a company that is not qualified but won through tampering of the tender process. Work never got started but there is proof that the land was to be sold for "atas angin" profit of RM59 million.

A 5 questions poser by a blogger and facebooker Lim Sian See in which Guan Eng will not answer is worse. A yes to all the questions would mean he is screwed.

Guan Eng had to brave it and face the public. The important facts and proofs against him is out there in the open.

One blog made a series of 30 postings against him that practically covered all the issues. The first posting here and the 30th posting here. The pre-series posting here asked whether MACC is afraid to investigate Guan Eng.

To-date, that is not true.

MACC had went in and investigated Pang Li Koon to Guan Eng. It is was done faster than the 4-month wait for MACC to interview Dato Najib on SRC, political donation and 1MDB.

Our sources at KOMTAR (and we do have including within vicinity to Guan Eng's office) said Guan Eng was served a warrant to declare asset, office ramsacked and computer confiscated. All within days after the investigation file opened.

MACC had announced that investigation would be completed by end of April. By then, the special committee from among ORP members will be formed.

Most likely, Attorney General could not reject the IP this time because everything will be so transparent that the ORP meeting will be telecast LIVE on TV3 to avoid someone say or leak something different from the press release.

The allegation MACC was giving them special treatment to Guan Eng is not true. However, MACC should not grumble over such open scepticism against them.

There was an MACC report made in 2010 on the Jalan Pinhorn bungalow but nothing happened. So do on the Taman Manggis but file was only opened recently.

It is a natural response of certain segment of the public to turned sceptical of MACC. The Taman Manggis issue had been talked about openly for so long. The UMNO fella got sued by Guan Eng and had to make an apology.

Things get done only when there is a big public commotion.

MACC should not be hypersensitive towards blog Masterdedah that wrongly accused a Penang state MACC officer of trying to clean up evidence for Guan Eng.

Such incident happened before in the big financial scandal against late Dato Nik Aziz's son-in-law, Ariffahmi. It is an open secret in Kelantan that MACC officer helped to clean-up the minutes of exco meetings.

PAS was so confident of their kaki inside MACC that former Perak MB, Dato Nizar Jamaluddin throw a challenge to show PAS commited corruption. Perak MACC head then was openly friendly with PAS that they could harrassed family member of a then UMNO exco to force admittance of guilt.

Stories of MACC officers and top officials pow on AMLA suspects are abound. There is also a rumour that Kevin Morais is not that straight and it is not about his sexual orientation.

Returning to the debate, Rahman Dahlan is not likely to manouver himself to be candidate for UMNO VP. Unless Dato Musa Aman or his brother Dato Anifah Aman do not contest, it may not likely to happen.

Though it raises his political profile, the debate may serve the purpose of cornering Guan Eng and keep the issue burning in the public psyche.

Also there is a distrust towards MACC and other government outfits in taking actions against opposition.

Partly due to the presence of government sceptics and opposition supporters, particularly Kelantanis in the civil service. And, partly due to a Malay government officers lack of confidence in dealing with non-Malay oppositions.

There is a widely held belief that opposition can get away away with murder. Remember ROS and the issue of DAP AGM?

There is also a perception that MACC will KIV cases.

The memory of then Director of Investigation Dato Mustafar Ali saying Dato Suhaimi Ibrahim will be charged next week in the case involving welfare fund still rings a bell. It broke out in February 2014. What happen to the case? Why Tan Sri Gani Patail didn't charge?

While opposition and anti Najib group believe MACC is being stifled, there is a belief that MACC is not as straight as a Chinese hair and the wayang involving the 1MDB/SRC episode strengthened their perception.

As a result of that incident, there is much talk of the town of this Dato or that Tan Sri government official has got money stashed away from blackmailing of the accused. There is even talk that someone benefited financially in helping to frameg Najib.

All this is happening because too much wayang was happening including Dato Rohaizad posing with Kit Siang and gang. MACC officcers never took picture with those making reports.

MACC is not going to charge a certain deposed Minister or a celebrity's husband because someone up there is buddy buddy with the accused. Who knows, maybe smitten by the pretty girl-next-door look singer wife.

And the MARA Inc case has it's strange twist and turn. Why only apprehend the suspects for questioning now when all had provided the same answers to the same questions some 7 months ago? Is it helping someone make a comeback?

It is an open secret that the former Chairman is aligned to a certain politician. Someone could badly trying hard to pin the politician to win some brownie political points for a comeback.

The mystery of that case is why didn't MACC go to Australia to investigate. The real hanky panky happening involving the Malaysian developer being sued in court for not paying his contractors could open to more credible lead.

Talking about leads, what happened to the U-Custom tender that was even raised in Parliament in November 2013. That project was supposed to be delivered but is heard to be extended for another 14 months!

The system does not work. The staff say it does not and will not work. IT people say it will not work. But why is the non-IT, non-Custom and due to retire Custom DG so adamant to continue. Apa cerita ni ...?

There is rumoured concern of national security risk.

These are among many issues that only built up a bad perception towards MACC that culminated into mistrust and now even Ministers had to play wayang to get things done.

With the recent events that led to perception problems with MACC, what are they doing about Bar Council representative, Dato Lim Chee Wee that is stongly suspected to have leak papers? Rather than sulk, why didn't MACC apply their ability in manouvering to sack him.

Change with any lawyers from Persatuan Peguam Muslim. Unlike Chee Wee who support the immoral act of sodomy, the Muslim lawyers are god-fearing and morally upright.
at 4/14/2016 10:50:00 AM

Both parties should abide the MACC Act as the is under MACC investigation. Just like Anuar Ibrahim's case/Dr Khir Toyo's and many other MACC cases. It is not proper to proceed with such debate while the case is being investigated resulting the investigator might be prejudice. Let the investigators/the prosecutor/judge carry their job respectively.

Between LGE and Rahman, the winner will be Salleh Keruak. Pls dont tell me that Rahman a political novice will upstaged LGE. He will be humiliate to certain extent and that is when Salleh will cash in. He desperately need a seat to contest in the next election. He wants Rahman's seat. Rahman is hopeless in Kota Belud

Another wayang... It is about who is less dirtier. Politic in malaysia is long dead. Only for those who cari makan for themslevs and their family and never about the rakyat.