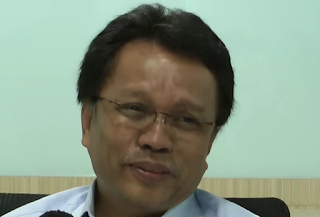 There was rumour that Shafie attempted to send overtures to various parties, including getting first wife to meet a lady confidante to the Dato Najib to plead his case. It was reported by a blog that he also tried to save himself by expressing support for UMNO to win the two recent by-elections.

When he visited Sungai Besar, he turned down invitation to join the campaign. It may seemed Shafie is sulking. Actually, it is all an act. 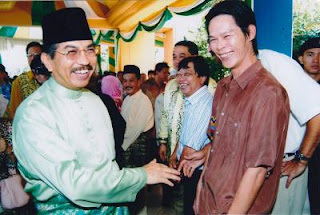 It is an open secret in Sabah that Shafie have been eyeing the position of Sabah Chief Minister. He had been trying all sort of attempts to dislodge the Aman brothers. In this allegation, he tried to link Musa to a shady businessman by the name of Michael Chia.

In an attempt to cheat using a similar political fund scam, the Sandakan Session Court had sentenced Micheal to a one year jail in February 2014. A court witness confirmed that UMNO Sabah had never requested for any political fund to be paid to UMNO via Micheal Chia.

Maybe that is how Shafie operates to be financially capable to make Semporna voters dependent on his donations. His supporters failed to realise he does not bother to take them out of poverty in order to maintain his political continuity.

Back then, Sarawak Report made fictitous expose of "hundred million dollars had been siphoned out by Musa" through "a web of off-shore timber companies" bank accounts in Singapore and Hong Kong.

SR's Clare Rewcastle Brown claimed to have the money trail established and exposed the bank document evidence in June 2012.

According to Clare, Michael Chia was caught in Hong Kong with S$16 million cash belonging to Musa in 2008. She concocted the lie that it was passed off as political fund for UMNO. However, Musa was cleared from any such allegation by both MACC and Hong Kong's ICAC.

Initially, Clare claimed the offense was committed in Sabah but money paid in Hong Kong. Clare then churned out an another story to say the money was moved from HSBC to UBS then to other Bank and filtered to Switzerland.

Through her network of on- and off-line media, Clare had them publish claim Musa and UBS is being investigated for money laundering by the Swiss authorities. In actual fact, there was no such activities.

Along the same ploy done on 1MDB, Clare is now trying to create an international media sensation with the hope of getting foreign authorities other than Hong Kong to investigate. She is trying to alarm them with the claim money had allegedly passed through each of their jurisdiction.

Clare also had her blog's main contributor and collaborator, Bruno Manser Fund to issue a statement as though there had been development in the court against UBS. It serves to sustain the allegation for her paymaster through news and report generated on fictitious development on the case.

In comments published by FMT in middle and late April 2012 [read here and here, respectively], it is highly possible that Shafie was the paymaster in the collaboration with Clare to fix and kill-off Musa

Two videos produced by portal Sabahkini have been circulating in Sabah to expose Michael Chia was in cohort with Shafie and the scheming hands in cooking up such false allegations was Shafie:

Shafie was also avenging Musa's support for an RCI on "Projek IC".

Though claiming himself to be a Bajau Laut, Shafie is actually a Suluk. Most of his voters are "Projek IC" citizens of Suluk origin from southern Phillipines. The same people involved in various kidnapping of Malaysians and foreign tourists off the coast of Sabah and Sarawak.

In the midst of the RCI, Shafie was defensive of his fellow Suluk. Taking an excerpt from our December 5th, 2014 posting:


Federal Minister, Dato Shafie Apdal was rather non-commital and taking a politically safe stance. He asked for agencies to be more careful [read MMO here]. It is to consider the feeling of his fellow Bajau Laut which roams the sea from Phillipines to Sabah.

To conclude, the video by PKR conclusively showed Shafie have been collaborating with opposition to depose a BN state leadership. He was not sulking and it is long over due to have him sacked by UMNO!
at 6/28/2016 06:00:00 AM

I don't think this exposure would be a tonic to boost the image of UMNO's lame President. It only confirmed that UMNO is laden with garbage.

I am just curious.

Why does Shafie need to send his 1st wife to speak to Najib's wife?

Thought decisions should be done by the Man himself?

You mean the Wife has a say and great influence over our PM's decision making?

You are right. It is project IC branches!!!!

Who said wife? Typical malaysian to presume and think it is correct.