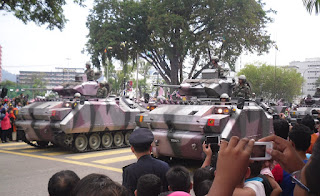 Monday was Hari Pahlawan or Warrior's Day to commemmurate the sacrifice of our servicemen and women in defending the nation.

We text our colonel friend a greeting with the link to the Sunday posting. Colonel was caught in a mine and lost a leg in a jungle operations near the border around 30 years ago.

Every Hari Pahlawan our gang will be reminded of a friend who died in one of the many Nuri heli crashes. He came from a poor family and was the hope of his single parent mother. It had always been a puzzle as to why he made the sacrifice for the nation when he does not have much to give?

The colonel, who was promoted from captain few years ago, replied in a serious tone:


The armed forces will not overstep it's constitutional boundary in such lunacy and grandiose undertaking.

With certainty, the armed forces pride itself in its professionalism and value the tenets of democratic country form of civil-military relationship. In layman term, that means a firm but respecting civilian control over an apolitical military.

His Majesty is the Supreme Commander of the armed forces. We swore allegiance to His Majesty and we serve at his pleasure. It is therefore preposterous, even insulting to the servicemen and women; to argue that the armed forces as an institution will raise armed against HM and by extension HM government!

He explained that soldiers are trained to take orders and carry out instruction. There is not much room for discretion.

The manual limits the power of the officers at the various level thus decisions need to refer to their superior. Every action comes with the required communication and order up and down the line.

And, how is a group of soldiers to do a coup when the procedure to requisition arms for operations is a tight. This was instituted after the Al Maunah incident. To overthrow a government is a massive exercise, it requires lots of arms, equipment and vehicle. Where will they gets it?

Then he said with a sterner tone, the fact that you are writing this indicates that perhaps the armed forces may not be doing enough to DISPELLED the MYTH military could participate in such a coup.

We explained that we are writing to preempt any Malaysians from thinking along this line. So he said if you are fishing, we bite because it is necessary.

Logical as it maybe, the threat could come from those that have left the force. A friend called to express disagreement and complained our posting had no conclusion. It was intended to be so.

He went further to say the welfare of the generals and top serviceman are taken care upon retirement but there are too many rank and file to be taken off. That could start resentment against the government.

Now, yours truly was brought by a little nutty upstairs former reporter to meet a retired captain and general moe than a decade ago. In both instances, there were conversation on the subject of a coup. They said the same thing. It will not happen but one did utter the word, "I'd take a bullet for him, anytime."

We were invited for a roti canai on Monday by an elderly gentleman, who had served and sacrificed for the nation.

In the casual chat, there were lots of reminiscing of the pasts. It was nevertheless relevant to understand and get a perspective of the present. Isn't that why we need to know history?

Then he shared many stories that would not have found it's way in the history book, or any autobiography or memoir. Some of it were shocking and dispel most of the common understanding and/or perception on event/(s) and person/(s).

He was giving the message that media and bloggers should take the effort to go down and find out what really was happening, especially in the past.

The action of a person today - good or bad, great or poor - may come about from what happenned during their childhood. His family, parents, social environment, culture, and socio-economy of the times have its influence the person's make-up.

Seek for the information beyond the quick biography of a person on RTM that typically is too good to be true.

A friend chipped in. He attended a wedding over the weekend and it striked on him when the father of the bridegroom said he agreed to the marriage for one and only one reason.

His future daughter-in-law came from a family of "orang baik-baik (good and respected people)." It is all about bloodline.

Any serious endeavour with any person requires a thorough knowledge of the background of the counterpart.

The elder gentleman went on. Historical cycle is about the past repeating itself. The cautionary message he gave was someone's psychologically scared for life could be dangerous. 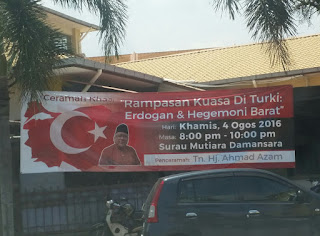 Then he went on to talk about Erdogan and Turkey.

Malaysians should not be too quick to pride ourselves when being mentioned together with Turkey. We cannot even compare to their size, population, economy, history, technological capability and military.

At the back of our mind, he may have read our latest posting. And, he asked do we know the Turkish President Teyyip Erdogan.

The west has and more so now are working overtime to depict him as a dictator. Make that comparison with other dictator or potential dictator whether he is so.

Somewhere somehow, the elderly gentleman was saying to look the other way instead of looking at a military coup to topple the government. The person saved by the military coup could be holding his own coup. Some analyst already spinning that story in the western media.

If there is any possibility of Erdogan moving to be another dictator, there is every reason to think so. He does not take a neutral position and leave the executive role to the Prime Minister as per past Presidents.

Erdogan now plan to place the military under the control of the Presidency. He already purged the military, judiciary, and government by the tens of thousand. The 11 soldiers alleged attempted assassination on him were arrested. 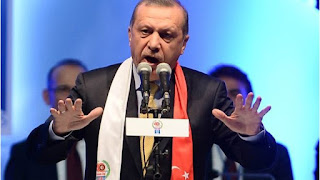 This need some history. Erdogan established the AKP after he left the Welfare Party to moved a way from their fundamentalist stance for a more moderate position to be more in tune with Turkey's secular constitution.

When AKP won a landslide victory in 2002, Gulen assume the Prime Ministership. Erdogan was still banned from politics by the judiciary. He assumed the post after court cancelled the election result of a constituency which made way for a by-election for him to win.

Erdogan and Gelen went a long way back. It could be internal rivalry.

Hassan Nafaa, a political  science professor at Cairo University wrote in Al Ahram. He felt it is too presumptous on the western media to spin Erdogan to take the dictator route. To conclude his analysis, he left it hanging:


In spite of the fact that the recent military coup marred his personal image and that of the current regime in Turkey, it has given him a new and great opportunity to change and improve that image.

Will Erdogan take advantage of this opportunity? Or will his habitual vindictive instincts and thirst for power prevail? The forthcoming weeks and months hold the answer to these questions.

So it needs a more thorough understanding of Erdogan the man.

In an article [read here] on Pentagon's 208 page study to do a psychological profiling of dictators, it is filled with descriptions such as "neurological abnormalities", "insecure, impotent, masochistic, and suicidal neurotic narcissist" to describe Hitler, "ardent nationalism" for Ho Chin Minh, "unpredictable and two-faced" for Khrushchev, "highly neurotic and unstable" for Castro, etc.

In fact, the subject of Erdogan's narcissist tendency was discussed in a social engagement portal, Quora here.

If Erdogan actually orchestrate a military coup to pull off his own coup and bring about change and rebalance the geopolitics in the region, it must be a truly brilliant move. However, does it have to come at the expense of hundreds of life?

Erdogan would not have made an act to cry at his close friend's funeral. He look sincere enough when he carried the coffin of a dead supporter. 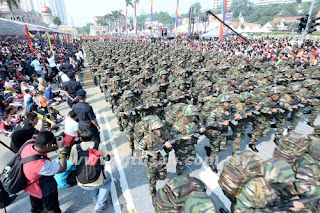 It comes down to understanding military coup.

Naunihal Singh view occurance of military coup tend to involve "states that were neither strongly authoritarian nor strongly democratic (anocracies), marked by low economic development and a past history of successful coups."

Since Napolean Bonaparte in 1799, military coup has occurred in "new states of North Africa, the Middle East, Asia, and Africa." Coup claim to be revolutionaries but seldom are. Samuel Huntington described the success of coups depends on the strength of political institutions and participation level.

An understanding of military coup in Asia can be found here.

Tun Dr Mahathir is in the midst of a coup against the government of the day. He admitted he is a dictator but claimed "people did not demonstrate against me before". Off course, it is a political statement to make him not look so bad in front of his former political enemies.

However, it is unlikely he has any known bizarre traits similar to any other dictators or up and coming dictators mentioned. As we used to describe, Mahathir was a benevolent dictator.

Prof Din Merican puts it, "Dr. Mahathir is a superb politician and an intellectual with strong work ethics. Some of us may not like his politics because of his Machiavellian streak. But we must at least acknowledge that it was the Tun who put our country on the world map."

Din went on to post here a letter from one Noramtaz Abdullah to express her amazement with Mahathir's physical development of the country.
at 8/03/2016 11:48:00 AM

This is stupid. And i will tell you why. Mahathir said he was dictator in jest. So whats your point? A dictator is like the current premier of malaysia. One that you brown-nose to so often.

Interesting reaction of the mahathirist. You hardly attacked the man and they are already circling the bandwagon. Why should they be insecure?

If I read your two parts posting, you are basically sending the message that a military coup is not constitutionally or operationally possible in Malaysia with the turkish military coup as background story.

The thought of a military coup exist and indications are there but not enough for one. The pragmatic avenue is a political coup by the people.

The current coup does not have the credibility of a people power uprising when led by a former dictator still in pursuit of power. Mahathir did not admit in jest. Who are the Mahathirites kidding with that one or two excuses?

It is insufficient to cover his other actions on royalty, judiciary, and civil service, and intentionally allowing rampant corruption sipped into the private sector.

It begs the question as to whether Mahathir has a secret past and family life we do not know about. Like the blogger, nobody really knows. He could have some of the characteristics found in other dictators but selective and in moderation.

Erdogan is still early to be labelled as dictator. No aspiration to have tallest building in the world. He is in a difficult position with insurmountable challenges ahead to bring about positive change for Turkey.

The constitutional principal for people self-rule and continual existence of public institutional are of utmost importance.

the problem is you don't even know how to differentiate between a dictator and a firm, full of control and visionary leader. There is no such thing as "selective and moderate" character of dictatorship.

the statement made earlier on 9.17 is not rebuke.

who are you kidding? what najib did in the past 2 years will definitely put him in the same category as Erdogan but with much much less support from the Rakyat.

i am also sold to the idea of Erdogan stage the Coup himself for validation.