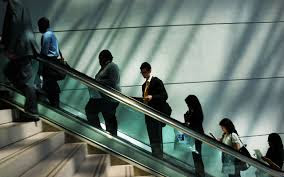 The street meaning to "cognitive miser" is lazy to think. However, to say so directly would only anger people.

When public perception of certain issues is wrong, it is not because they are not intelligent. According to an article on BBC Future, "Why are people so incredibly gullible?", even Nobel Prize winners have fallen for some bizarre and baseless theories.

A researcher on misinformation at the University of Southern California, Eryn Newman said, “Even when we ‘know’ we should be drawing on facts and evidence, we just draw on feelings.” To save time and energy, our brains tend use intuition rather than analysis.

People can be misled by the source of information, evidence, thinking of others, compatibility with their own belief, and want for a good story.

Getting even with Mahathir?

If the report by Malaysiakini is taken as source, there are members of the public that could fall for the accusation that local authority turned a blind eye on Tan Sri Ananda Krishnan following a warrant of arrest by India's Central Bureau of Investigation (CBI) for money laundering.

Amanah Youth chief Shazni Munir Mohd Ithnin was merely attempting to link the story to Jho Loh and 1MDB. It is of no relevance to him that the link to 1MDB is technically wrong. In fact, there is neither any court order for police to arrest nor political association of Ananda with current leadership.It was only politics.

Those understanding the political link speculated that Ananda is being investigated for his association with Tun Dr Mahathir. It is "a good story" and has "compatibility with their own belief" but why would India want to involve in Malaysian politics.

Same with the latest case of Securities Commission.

Without pondering that insider trading case takes long to gather evidence, there will be questions raised as to why must they be charged now?

Has it got to do with existing political feud between Prime Minister Dato Najib and former Prime Minister Mahathir? KC Yeow was a business partner to former Kencana Chairman, Tan Sri Mokhzani Tun Dr Mahathir.

The better story would be SC had looked the other way on 1MDB bond issues and an existing securities offense for stock manipulation involved someone linked to Mahathir. It is still only a story.

What will they say when someone got charged by SC for Yinson as exposed by the other side?

When this blog raised the issue of MAS and targeted Tan Sri Nor Mohamed Yakcop for doing hatchet job on a Malay entrepreneur, Tan Sri Tajuddin Ramli, we were discredited on the political premise of  defending Tun Dr Mahathir, attack Tun Abdullah Ahmad Badawi and other accusations.

Remember that when Tajuddin sold MAS, the proceed went into a public-listed company, Naluri Berhad. His plan was to draw on the money in the form of special dividend to shareholders to enable him to settle debts related to his shareholding in Celcom.

Nor Yakcob blocked the approval and Tajuddin was forced to default. This blog reminded that Tajuddin had to step-in to buy MAS in order to save Bank Negara Malaysia from Nor Yakcop's forex trading mess.

It was not Tajuddin's corporate plan to go into aviation (though he had MHS in his stable). His plan then was to pursue shipping with the purchase of PNSL and sales of interest in D&C Bank, Sharp Roxy, Tongkah, etc.

The story is right and it is in line with the public thinking and perception of Tajuddin as Mahathir's crony then. What will they say after viewing last Saturday's The Edge issue below: 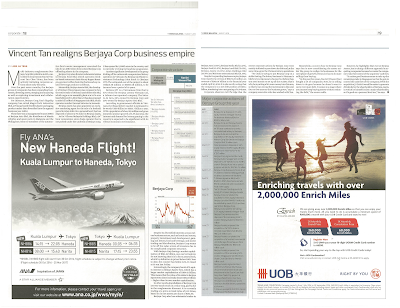 Naluri was taken over by Atlan. Now the real and final owner of Atlan is known. 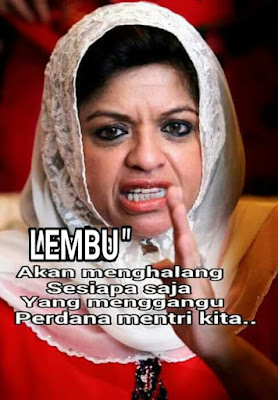 Now come the issue of Tan Sri Shahrizat Jalil and her husband's lembu business that received much slack. When she spoke out to defend Najib recently in her capacity as an UMNO Wing Chief, social media made fun of her.

The perception on condo and lembu is so embedded that public was not thinking along evidentiary line or taking account on latest development on her husband's business.

One was allegedly channelling RM9,758,140 through four NFCorp cheques to partly pay for the purchase of two condominiums at the One Mene­rung complex in Kuala Lumpur and transferring RM40mil via a cheque to National Meat & Livestock Cor­poration Sdn Bhd.

The other allegation was for using the funds prior to getting approval at the company’s annual general meeting. [Read in The Star here].

Both charges cleared. Rafizi Ramli is buying time for BAFIA offense and defamation. Truth has catch up on him. Last May, he admitted making assumption on allegations involving 8 properties.

NFC is now suing Public Bank for the leak that cost the company. The sum sued is believe in the tune of RM500 million.

No newspaper dare to publish the news for fear of losing their ad income. The Sun did report NFCorp have received documents pertaining to the Bank's domestic inquiry against the former employee that leaked of confidential account information of NFCorp.

So careful who you call Lembu. 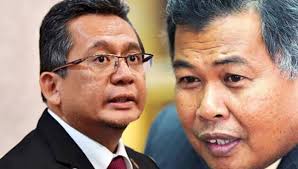 Terengganu MB, Ahmad was reported by MMO to claim there is no problem. The leadership dispute will end on Monday tomorrow.

It is easy to assume Md Said is rooting for Mahathir and this is a ploy to takeover the state. It is along the "thinking of others, compatibility with their own belief, and want for a good story".

If it is really so, Md Said could have worked together with PAS and remove Razif and UMNO in one go. Be it tomorrow or before, he did not do a proper usul. It only mean that if he wanted to, he could have done it long ago.

What is he doing then?

Joceline Tan had a good account of the political saga here. One comment of her caught our attention:


Political circles in Terengganu are abuzz with talk of the gelombang kuning or yellow wave. It is the euphemism for several Umno division heads and elected representatives aligned to Ahmad Said and their aim is to oust Ahmad Razif.

The man-in-the-street explanation is Razif infuriated the Sultan for mortgaging away Terengganu's oil. It involved Bertam oil finding in 2012 in which it was announced as Pahang's oil. It is speculated that Mat Said is only doing Tuanku's bidding.

Razif explained that the oil does not belong to Terengganu. He did say in The Star, "The Federal Government has said before that it will help the nearest state to the oil well. So, that’s what we are negotiating for, a 5% royalty from the Bertam oil well, located about three nautical miles off Terengganu waters."

Mat Said is such a gedebe that it is difficult for an aristocrat like Najib to communicate with. He is likely to rely on the Terengganu people in Kuala Lumpur he trust. There lies a communication problem.

Najib should meet Mat Said to hear his side of the story. Razif could be telling something different. Trust Najib to have thought of the political possibilities including the possibility of BN losing the snap election. 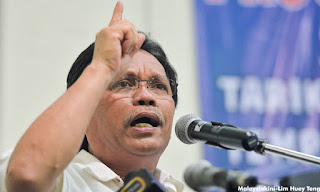 Shafie is in the midst of building a good story for public to believe in. It was promoted earlier that 317 UMNO division and branch leaders of Semporna left UMNO. There was a big hype. This blog wrote Shafie paid for the hall filled presence.

There are those that do now want to believe that story. It is OK to disbelieve because people believe what they want to believe. We would believe local sources and people we had working relations with.

Not only is the hall was filled with his Suluk kin folks, it is not UMNO. Same source from Semporna elaborated that Shafie paid PKR members to fill up the hall. Didn't we hinted that here?

As far as the Tenom story, only 2 or 3 resigned from UMNO. The crowd came for makan-makan and cabutan nombor bertuah. For what Shafie did to Tenom folks, he could not have such support.

Shafie is in a bind. He can't join Mahathir's new party. The proceeding from Projek IC commission could come out in full and he is gone. Shafie wanted to re-join USNO but Abdullah Sani Abdul Salleh leading the revival of USNO is another of his mortal enemy. His only choice left is to form his own party.

Shafie got the money but he does not have supporters and network to put up a new party. He has to buy instant membership by tagging on to few personalities.

His agenda is expected to be Sabah for Sabahan. A bit too late for him to join a loaded bandwagon. Furthermore, he has no affinity with KDM community to be able to have any impact.

He tries to create a good story, gauge the thinking of others and making it compatible but source of information and evidence does not jive. UMNO Secretary, Dato Yahya Hussein disputed his claim as the earliest UMNO fighter. He was still working in civil service then. 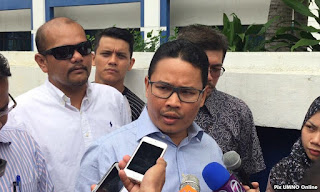 Didn't we say Azwanbro is an idiot?

Will not blame Raja Petra for his story. The conspiracy by the four Tan Sri has been his forte from the beginning. For Azwanbro to do a police report, that is something else.

Making a false report is an offence and he can be charged for it. Dr Puad Zarkashi was reported by Malaysiakini warning Azwan for making false report. Gerakan Youth leader too called for a probe.

IGP commented that there is no case. It is believed Azwan used Dato Kadir Jasin's blog post as proof to the police to clear himself. Thus Kadir's reply that he is no moron.

The suspicion is Azwan was trying to play a game and get the three Tan Sri to sue. That way more will be exposed on Najib. Dangerous game Azwan is playing. People know those supporting his effort tried to shame the PM using the Nothing2Hide event.

Azwan is known to be closely associated with Perak MB Dato Seri Dr Zambery Kadir. Should anyone throw a spanner in the work, it could put Zambery in trouble. All it takes is play up Zambery's past association with Muhyiddin and a portal linked to Zambery is harbouring anti-Najib elements.

To chop off Azwan's political lifeline, Zambery, who has done a good job at Kuala Kangsar and to some extent in Perak, end up in hot soup for nothing. Zambery has been working hard for Perak despite the constraints faced.

It is not difficult to do so with a gullible public. More so, when segment of the public believed lies and deception are acceptable in politics.

so why didnt the 3 tansri just sue azwanbro?
unless it is true that they did supply documents to US DOJ

The idea of truth being dependent on the ability of the accused to sue is typical argument of the shallow and myopic protoon.

The principle is the onus to prove lies with the person making the allegation. Not visi versa.

There is an interesting news release here. Must read to get a better picture - http://www.nst.com.my/news/2016/08/165287/rm71m-govt-loan-deposit-never-leveraged-collateral-buy-office-properties-say