Will Kadir Jasin be the new Felda Chairman? 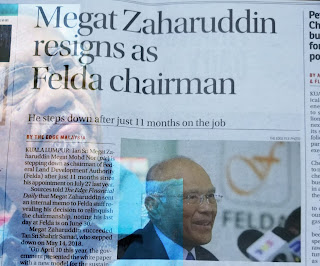 An excerpt in this blog's February 28th, 2019 posting entitled "Is NEAC 2.0 to endorse "jual negara", including TH's asset?" reads:


Felda and FGV have been forced to sell lands and properties.

The Edge reported 2 hours ago: Megat Zaharuddin resigns as Felda chairman. It is Edge daily headline for today. Will that mean Kadir Jasin could be the next Chairman of Felda?

Before this blog had a fighting chance of being a conversation piece, Astro Awani speculated the return of Tan Sri Bakke Salleh to Felda.

It does come as a surprise after reading the atrociously written letter to the PM revealed by Rocky Bru. How could he write a letter to PM in such a dry business manner without due recognition of the position of the person it was meant to be?

This is Malaysia Baru and it could be another new way things are done. Past expectation does not apply.

Why did Megat resigned?

According to Mahathir, he resigned due to ill health. Having Mahathir explained, it is hope it would squash any rumours and negative aspersion made.

Problem is it did not for Dato Seri Azmin. People are still pointing their finger at him. Mahathir said it is not the practise in Malaysia for politicians to resign on fake videos. And he did not believed Azmin would be so stupid. It is likely he did not complete his sentence and left it hanging. "Azmin is stupid ...!"

Hope he never intended to say Megat is a sick man. Megat statement was made not by him but on his behalf. 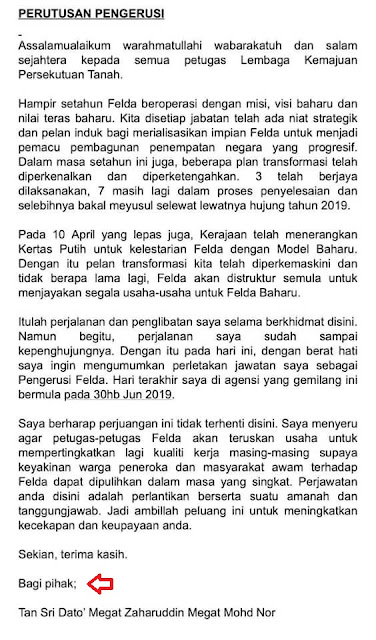 In The Edge report, Megat said in the internal memo:


“On April 10 this year, the government presented the white paper with a new model for the sustainability of Felda. With this transformation plan, Felda will soon be restructured to succeed in all the efforts by a new Felda.

“That is my journey and involvement during my service here, but my journey has come to an end. Hence today (yesterday), I want to announce my resignation with a heavy heart as Felda chairman,” said Megat Zaharuddin in the memo written in Bahasa Malaysia.

The conclusion in the White Paper came as rather surprise as it seemed not departing from the manner Felda does it business. 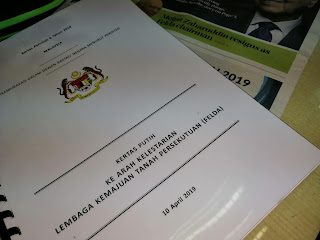 Mentioned is the priority to reduce the debt burden of Felda's second and third generation settlers. It is something selective socialist Lim Guan Eng would not condone and cooperate. He could witheld the cheque.

A Shell man turned banker like Megat would have resorted to make Felda self sustainable and operate in business-like manner.

However, that would be a departure from the nature of Felda as an organisation with socio-political roles to play. If that is not considered, PH could lose the Felda seats gained at GE14.

Plantation man Bakke could be a better choice than Tok Pa the PTD administrator-type and Kadir Jasin the media man.

It is a time of doing things and not of waiting for instruction and good communication or propaganda.

The term of reference or KPI or task to be given to the new Chairman is not known.

Will Felda remain in its social political role?

If it remained so, oh oh ... the CEO of Felda is a civil engineer, who as PKNS GM turned the social organisation into a corporate entity.

PKNS ended up building luxury and expensive condominiums, and stopped building low cost or affordable housing for the rakyat of Selangor.

But then again, under a crisis situation and urgency of achieving results, Felda should not remain conventional.

The White Paper should have emphasised on smart farming and not mention at the end. Articial Intelligence is needed to bring cost down and pass the savings to farmers.

Priorities are to bring cost down, new market to increase sales and take farmers out of 1970 level of income. Over time and at cabinet level, a strategy need be drawn up to increase oil palm prices.

Alas the White Paper was intended for Azmin to train the political gun and change public perception against Dato Najib but it bombed out in Parliament.
at 6/25/2019 01:12:00 PM