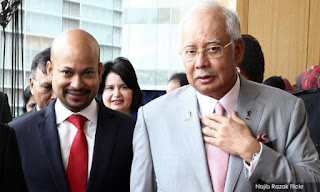 The propaganda mode of mainstream media towards Dato Seri Najib Tun Abdul Razak to spinning of fact, bias and unbalanced reporting, and non-disclosure of facts revealed in cross examination will deem them obselete.

Before GE14, public distrusted MSM report for bring pro-BN. PH win of GE14 is not improving the integrity of MSM. The same complain is heard within the government side against opposition on social media as heard before GE14.

It means PH is not serious about press freedom and when under political pressure, resort to the same antic as BN did before. If the demise of Utusan is a result of PR and PH boycott, the now pro-PH Media Prima and other MSM will follow suit.

Public will distrust MSM and stop buying it to prefer to seek for direct information online and read the various opinion and analysis found on social media. It explains why Gobind will repeat the same mistake to pay dedak to cybertrooper.

The attitude of MSM is no more obvious than the current trial against Najib and Arul Kanda on alleged tampering of audited report for PAC. 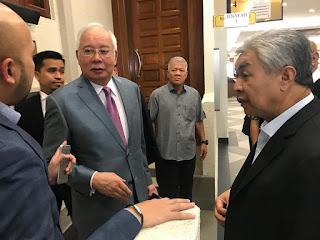 Coming of the expected prima facie decision in Najib's SRC trial, both prosecution and MSM are seen on high gear with their spinning in the trial of Dato Seri Zahid Hamidi and tampering of audit report trial.

The written judgement on the SRC trial will not be provided for decision on prima facie so no analysis could be made. However, the statement of judge Dato Nazlan Ghazali in court shows his inclination as suspected earlier turned to be true.

His basis are not based on undisputed fact, including the questionable and unsubstantiated claims of Dato Husni Hanadzlah. Nazlan dare not make made decision against government.

Tan Sri Shafee's strategy could be to pursue for Court of Appeal and Federal Court instead of one judge High Court that could be swayed.

So much for justice and rule of law under new government.

On Dato Zahid Hamidi's case in court, the DPP claimed not a single sen was used for welfare and charity with anti-Zahid social media claiming Yayasan Akal Budi payment of outstanding Perak footbal team salary is not charity or welfare.

When the long list of charity work revealed, there was no report with a headline in MSM to dispute DPP statement.

Zahid's family foundation received money from profit of his investment and renumeration as director of public listed company. It was not highlighted by MSM because it will shed a different light to the allegation Zahid received money for the foundation from corruption.

MSM has moved to highlight inappropriate procedure and management of the foundation. Zahid can be rather reckless on procedures and legal compliance, but MSM should give necessary coverage to the defense side of the story.

Alas, unlike Najib, Zahid and his team have been complacent not communicating his side of the story to the relevant people to propagate and should be blame for the opportunity taken by MSM.

Information on the trial is available on the FB of Dato Ibrahim "Tiger" HERE, HERE, HERE, and the latest HERE. 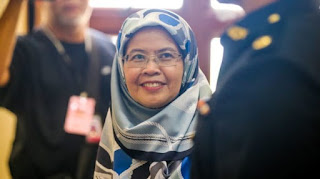 Najib was prepared with his communication strategy for his cases. However, even Najib is unprepared in his audit tampering trial to the higher gear spinning by MSM.

When taking the stand, Tan Sri Dr Ali Hamsa said Najib was not satsfied with the report. In the meeting, Ali said Arul, the co-accused with Najib, viewed the report as filled with hearsay and not factual. Similar to briefing by an engineering trained MTEM member to Perkasa on 1MDB issue many years ago.

Prosecution had an audio recording leak of the meeting done by government auditor Nor Shalwani. It supported both of Najib's men, Ali Hamsa and Tan Sri Shukry openly claim Najib instructed to change the audit report.

The shocking audio recording got the mainstream media and segments of the public rejoice and became judge and jury to assume Najib and Arul is done with. With judges scared, threatened and possibly bias in favour of government, there maybe ground for prima facie but conviction is still uncertain.

Najib's immediate response on his FB is that he was not in the meeting and requested to observe the chronology of events.

According to lawyer Yuktes Vijay, there are other known copies of the "destroyed report" kept in the safe which means there was no real issue of destroying evidence as alleged.

Her motive to illegally make recording is in question and she may or may not have committed OSA.

However Yuktes could not answer for as to why the changes made as it is all public information especially the one on Jho Low's formal role. Nabeel Naqie explained Najib do not gain any benefit from the four changes made.

Facebooker Salahuddin Hisham is of the view that Auditor General, Tan Sri Ambrin Buang may have taken in matters still under investigation and not confirmed yet.

Now one can be hindsight experts and consider the original as true, but it is not at the materal time.

It is still a draft copy and only considered finalised upon signature of Ambrin. It is usual for draft report to be discussed for its correctness with the audited persons.

The gist of the audio played in court is in MMO report which sources present in court claim tally with the playback in court.

If anything is incriminating, it was Ali Hamsa that should be charged for tampering and it seemed to be a PTD cover-up, claimed Salahuddin. 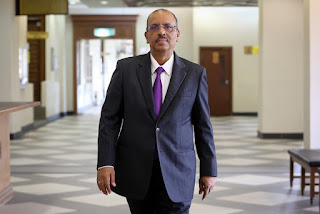 In the meeting chaired by Ali Hamsa, it is not Arul that have authority to change the audit report and it was not Arul that said country interest must be protected.

Why then is Arul, who was expressing his view, being charged for aiding and abetting?

There could be two reasons. Firstly, the likes of Tony Pua who was dueling with Tony Pua before GE14, could be getting even and avenging for being embarrassed with factual error.

Their statements could not collaborate and Salahuddin felt Arul is being charged and subsequently being asked to be prosecution witness to pressure him to concur with the threatened Ali Hamsa and Shukry.

By keeping Arul as a co-accused and asking him to testify, it is tantamount to forcing him to testify against myself. This is a breaches of right against self incrimination. It also raises some logical conundrums - does his own lawyer then have to cross examine him?!

Prosecution is trying to drive a wedge between Arul and Najib by raising suspicion he made a deal with the prosecution as in the case of Dato Seri Khir Toyo in which co-accused Shamsuddin Heryoni betrayed Khir. He did insist for no postphonement in contrary to Najib's application for postphonement.

Arul is unlikely to cut a deal. The invoked Section 63 does say, provided that the Judge deems his evidence to be truthful, complete etc only then the Prosecution MAY apply for the him to be discharged as a Co-accused and the Court MAY issue a certificate of indemnity.

Shafee will be cross-examinating these witnesses today. Make sure MSM report it correctly. Otherwise, they are glaringly an accomplice with the #KerajaanSepenggal in being part of a political prosecution.

Come GE15 or earlier resolution of parliament could turn the fate of many.

Dato Seri Anwar Ibrahim does not have enough seats and neither do Mahathir, but without support, Mahathir could not stop an increasingly "millitant" Anwar's reformasi 2.0 army.
at 11/25/2019 10:10:00 AM

Your comments sounds like a BN paid cybertropper. How can there be no prima facie case against Najib in his SRC case. The evidences are so glaring as a day Your are so biased as well in Zahid Hamidi Akal Budi case. Your integrity as a blog is definitely questionable. You dont even come close to what our general public feels. Malaysian public are not so stupid to believe as what is written in your blog. Both of these politician are definitely guilty of their crimes and to support them blantantly is a disgrace to humanity.


Whats wrong with stating your points without passing such infantile remarks?

That is the mark of a cybertrooper. You could be one yourself to come with such judgement and accusation.

Typical of one without confidence in their own view

Msian public voted for the incompetent, corrupted and ever lying PH into govt.

Onn Chee Soon, is what the general public feeling relevant and correct? Is the majority of the Msian public not stulid and gullible to the crap dished out by MSM?

Stop taking refuge in what the public feels. There is no clear gauge of how the public feels and the correctness of their thinking. Unless ypu did a survey, comment from reading social media is selective and limited indication of public thinking. Even properly run survey are being manipulated.

Are you a MSM reporter or journalist?