Not in Mahathir's life will Najib be acquited [Updated] 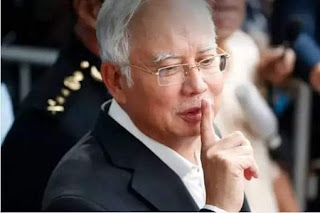 In a matter of few hours, High Court judge, Dato Mohd Nazlan Ghazali will deliver his decision on whether there is prima facie and Dato Najib will be required to put a defense.

We are now at the parking lot of the Jalan Duta to hear the decision.

Many months ago, a chance meeting in Bangsar with one of the defense council claimed Najib should be absolved but Tun Dr Mahathir will not allow for it.

SRC is a low lying case to prove Pakatan Harapan allegations on 1MDB and SRC against Najib since 2015.

The 1MDB case is more difficult, long case and complex as it involves foreign money trail. It happened earlier than the SRC case which happened at the tail end.

The opinion of the defense counsel is quite prevailing and one can see social media commentators suspect the court will succumb to Mahathir's wish.

Furthermore, there is a long list of indiscretion by AG in favour of government political leaders that lead to the belief AGC is rigging cases.

Decision by Coroner relating to the Inquest on death of fireman Adib led to the suspicion AG used inquest to divert investigation.

The close court of Paul Yong rape case raised issue on the independence of judges. Recently, a judge, AGC prosecutor and lwwyer were charged for corruption.

Taken that the likelihood of biasness is high, it was rumoured that government insist in getting Najib imprisoned, by hook or by crook, for their political expediency.

One source close to AGC had once revealed they intend to pun Najib on abuse of power. However, a former DPP said the best chance was to prove for conflict of interest.

One witness and a PTD officer present in cabinet meeting testified Najib did not recuse himself on an SRC cabinet decision.

However, unlike Hishamuddin, Nazri Aziz and Khairy who recuse themselves in certain discussion involving their family members, Najib was acting on behalf government thus no personal conflict.

Lawyer A Srimurugan is of the opinion that one out of three possibilities is for partial acquital with Najib required to defend himself for money laundering but not for abuse of power and criminal breach of trust.

Read in FMT below: 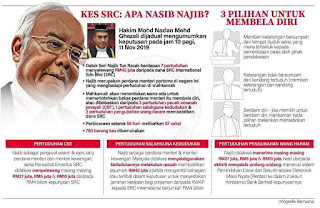 KUALA LUMPUR: After calling 57 prosecution witnesses over 57 days and two days of submissions, Najib Razak will know on Monday whether he has a case to answer on seven criminal charges in relation to transfer of RM42 million to his account from SRC International.

Lawyer A Srimurugan said High Court judge Mohd Nazlan Mohd Ghazali has to critically evaluate the evidence of the witnesses in the light of the cross-examination by the defence.

“It is up to the judge to decide how much weight is to be assigned to the witnesses and the documents tendered. He then, on the totality of the evidence, has to decide whether the prosecution has made out a prima facie case,” Srimurugan told FMT.

He said there were three likely scenarios: Najib ordered to enter defence on all the charges, the court gives him a total acquittal, or Najib is acquitted of the abuse of power and criminal breach of trust (CBT) charges but asked to answer the money laundering charges.

He faces three charges of money laundering and three for CBT in the transfer of RM42 million to his account from SRC International, a former unit of 1MDB.

He is charged with committing the offences at AmIslamic Bank Bhd on Jalan Raja Chulan and the Prime Minister’s Office in Putrajaya between Aug 17, 2011, and Feb 10, 2015.

During submissions, Attorney-General Tommy Thomas said Najib abused his power when he sat in the cabinet meetings when dealing with SRC International.

Thomas said Najib, among others, approved government guarantees for SRC to obtain a total of RM4 billion in loans from KWAP in 2011 and 2012.

He said Najib benefited as RM42 million of SRC money, which was part of the RM4 billion loans obtained from KWAP, went into his private accounts.

Attorney-General Tommy Thomas.
Thomas said Najib amended the SRC constitution to wield absolute power and caused the company to borrow money where the government had to issue guarantee letters.

He said senior lawyer Ranjit Singh had also testified that Najib admitted in a defamation suit that RM42 million from SRC International went into his personal bank accounts.

Ad hoc prosecutor V Sithambaram, who was given a licence to feature in the prosecution team, said the siphoning of RM42 million of public funds was done with the direction and knowledge of the former prime minister.

“The CBT was well planned and pre-meditated over a few years by the accused,” Sithambaram had said.

He said evidence indicated a layered process, with money deposited into Najib’s private bank accounts and then withdrawn, among others, through the issuance of cheques.

Ad hoc prosecutor V Sithambaram.
Sithambaram also panned the defence’s position that the RM42 million was a donation from an Arab royalty, saying the money was almost entirely utilised, with only a balance of RM763 in one of his accounts as of Sept 9, 2014.

Lawyer Muhammad Shafee Abdullah said there was no case of abuse of power as his client had no interest in SRC, which was a government-linked company.

“This is because Section 23 (4) of the Malaysian Anti-Corruption Commission Act provided immunity to him as the then prime minister and finance minister when he represented another public body like SRC,” he said.

Shafee said Najib could not have misappropriated RM42 million as that money was not from SRC but was part of a donation from an Arab prince.

He said Najib’s money laundering charges also crumbled when the prosecution failed to prove the predicate offences of abuse of power and CBT.

Counsel Harvinderjit Singh, who is assisting Shafee, had also urged Nazlan to ignore some 70 documents tendered as evidence by the prosecution as they were not original documents and their “makers” were not called to testify.

The prosecution had sought to prove its case by way of oral, circumstantial and documentary evidence. However, it has been unable to locate several witnesses despite attempts by the police and MACC.

In response, Sithambaram said the MACC Act and the Anti-Money Laundering, Anti-Terrorism Financing and Proceeds of Unlawful Activities Act (Amlatfa) allowed the prosecution to tender copies of documents.

“The legal position is that the Evidence Act, which is a general law, should give way to the specific legislation under which the accused is charged,” he said, adding that it is up to the court to determine how much weight should be given to them.


If it is for only the AMLA law, it would be interesting. Money went into Najib's account and he signed cheques from the account.

Another opinion quote the AMLA law  require no need to prove crime had been committed. Maybe it is meant on the freezing of assets.

There have been complain that AMLA have been abused beyond the original intention for use against terrorism. BY right, corruption should rely on money and paper trail without need for AMLA.

Which ever it is, the popular bet is Najib will be required to defend himself in totality. Under Mahathir and DAP control, there is no rule of law but rule the law.

Pity one Facebooker who promised to  go streaking at KLCC if Najib is acquited.

10.55am: Justice Nazlan is relating the events leading to the approval of the loan, the additional loan and the government guarantees.

The accused, he said, wielded considerable power and the insertion of Article 117 provided him control of SRC.

He said former second finance minister Ahmad Husni Hanadzlah tried to intervene in SRC but was prevented by the accused from doing so.

Najib had expedited the disbursement of funds to SRC and since then the company has defaulted in its loan payments to KWAP.

The court also found Najib prevented SRC from checking on its investments in the Swiss Bank..

"In view of the totality, such involvement is beyond the ordinary. It demonstrates a private and personal interests in SRC.

"This proves interest as stipulated under Section 23 of the Macc Act 2009," Nazlan said.

11.05am: The judge further said that Najib also approved the short term loan when SRC cannot pay the KWAP loan.

This shows Najib had abused his office for gratification.

"The accused's interest in SRC can be seen in its formation in January 2011 and until the money was disbursed to his account in December 2014 and Feb 2015.

"The accused had interest in SRC where he had total control, resulting in RM42 million deposited into his accounts which is a result of gratification," he said.

"It is for the accused to rebut the evidence and I find the element of abusing his position has been proven and as such a prima facie case should be called," he said.

The RM42 million is from an unlawful activity.

In light of the CBT charges the funds were transferred out of SRC and an offence of CBt is proven in the wrongful loss and the RM42 million flowed into Najib's accounts can be said as a result of an unlawful activity," he said

The lack of inquiry and police report, the judge said does not establish otherwise

"In light of the maximum evaluation, in my judgment (the prosecution) has successfully proven each element of abuse of power, cbt and money laundering.

"A prima facie case has been established on all seven charges," he ruled.

After interpreter explains to Najib, he elects to give a sworn testimony from the witness stand.

What to expect when the gentorosaurus rule as number 1 in Malaysia. He want his son and he’s very revengeful with Najib whom been implied to destroy his sons and all his cronies. Now he let his known protege whom pretend arms length (Tun D) to control the government purse and investment.