NAFAS Scandal: Lessons in the intricacies of governing 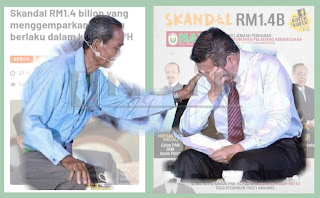 Minister of Agriculture, Dato Salahuddin Ayub and indirectly, the Prime Minister are being accused by MCA President and opposition MP for Air Hitam, Dato Wee Ka Siong in Parliament for giving out contract directly to NAFAS worth RM1.4 billon.

Apparently, it is done through a "jalan belakang" (back channel) upon consultation with the Prime Minister after NAFAS lost out in an open tender.

Opposition demanded an answer from the MInister by 4:00 PM but it was not forthcoming.

The video of the Parliamentary session below:

Since the Minister is from AMANAH, Wee raised the presence of AMANAH politicians on the Board of Director.

Pakatan Harapan promised no more political appointments, but it is as rampant or common as during the Barisan Nasional administration. 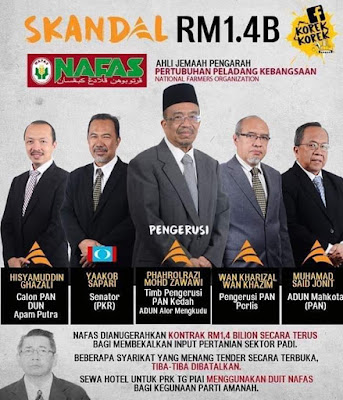 There were attempt to deflect by pro-PH FBer claiming other members of the Board are aligned to BN. 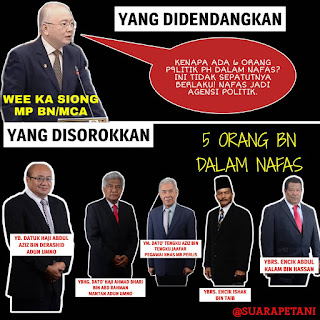 Such excuse is lame.

Dato Mohamed Hassan described in jest as  marrying a widow but refusing to take responsibility for the woman's children. 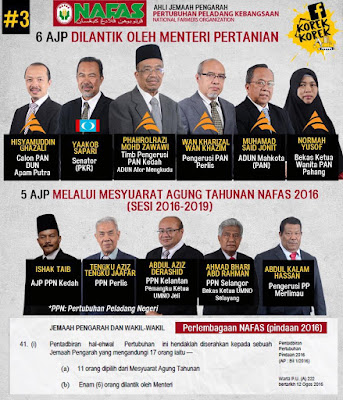 NAFAS was restructured by new government for Chairman to be appointed instead of elected.

In June 2018, it was the Minister that suspended NAFAS operations for restructuring.

Wee raised the bigger question of whether there were elements of croynism. A report have been lodged with MACC by the winning bidder. 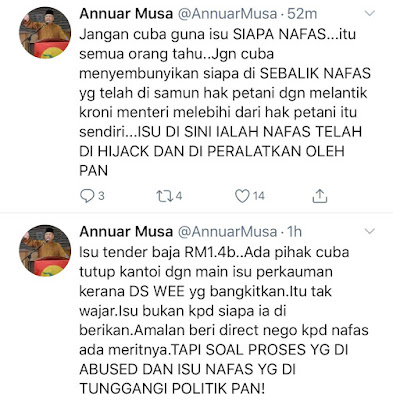 Last year also, the Ministry approved ending BERNAS monopoly as the single and main supply and importer of rice on the basis of opening up for competition and efficiency.

Industry watcher suspected it was to serve certain business interest. 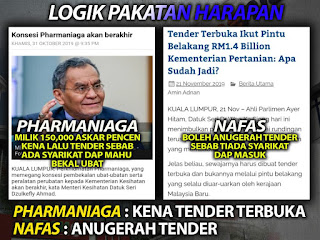 On the same note, Health Minister from AMANAH, Dr Dzulkifli Ahmad insisted in breaking up monopoly of Pharmaniaga whose role was to keep cost of medicine down.

It will not bring cost down but he thinks open bidding could do so. But now another AMANAH Minister is not thinking of lower cost of fertiliser.

It is inconsistent for AMANAH politicians to use the open tender and encourage competition as an excuse for a case, but resort to backdoor channel to win tender at their convenience for other case.

The inconsistency or incompetency of AMANAH leader is more apparent in the case of Mat Sabu. He worry over LTAT's low dividend but party underling cancelled the contract of LTAT-owned Pharmaniaga.

He could only blame the janda for having eight children from previous marriage.


There were critics leveled at Wee from the reply by NAFAS Chairman Dato Pharolrazi Mohd Zawawi, who claimed it was necessary to meet the dividend due for its 900,000 members.

He was criticised for carrying a Chinese economic dominance agenda to monopolise the tender outcome for Chinese businessmen.

However, it is the talk among businessman that Tony Pua have been instrumental in manipulating tender process to get the "best deal" for a certain interest, but not the best price to reduce government cost.

One supply tender was heard to have undergone three bidding process without a decision made. Apparently, Malay-owned company won the bid and is technically qualify.

The three time bidding was meant to know the fair price level for a friendly Chinese to submit a direct nego proposal with a PFI term together with bag promised to be delivered before the letter of award.

The critic towards Wee is an incomplete story. The real issue is:


Why did the KSU openned the fertilizer supply for padi planting to open tender since it is known that NAFAS has a socio-economic role to supplement farmers income?

The KSU should have known that since 1986, there is a program for NAFAS to supply fertiler for direct nego. The factory was built on the instruction of PM4.

When the KSU open tender first before doing a direct nego, those involved in the tender would naturally be unhappy. 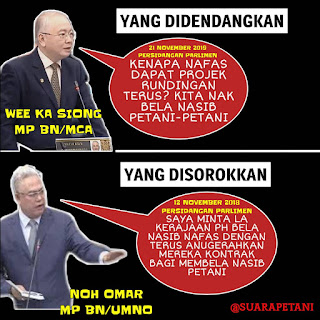 Without the tender award, NAFAS, its factory in Gurun, and nearby Petronas factory could be closed. Thousands of workers, especially Malays will lose their job.

Practically 96% of revenue came from the fertiler supply. That is return for more than 900,000 farmers.


During campaigning, it is easy to make promises, criticise and do expose.

In reality, it is not so simple. More so, to meet the expectation of good governance, transparency and accountability in the pursuit to take care of the peoples' welfare.

It is a good reminder to Salahuddin and his fellow AMANAH politicians that governing is not easy. Governing is prioritising and involves delicately balancing of conflicting interests.

So as government, they should stop shooting their mouth with cliche, rhetorics and endless polemics.

The opposition understand well the intricacies of governing, but the government side have yet to understand it.

The best wording to give to their brain and ears is “ala utoh”, sorry no words are better to say. They talk as if the sky are blue and can be paint blue. Reality wise BN knows very well it is not easy.