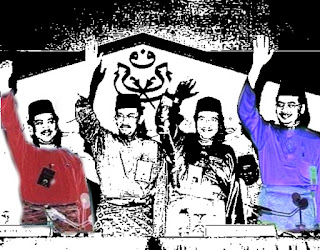 The rate of changes and turnaround in political leadership, alliance, stance and agenda is too swift.

Fom the day the first Corona Covid 19 virus set foot on Malaysian soil till the day it is put at bay, it will not be a surprise national leadership, ruling parties, political alliances and key government appointments could change hands several times.

The cycle of a politician's fate could change from peak to trough, back up to peak again and down to the trough within few years.

It is unthinkable that millenium's culture have overwhelmed tradition and long held practices. And, history and past relationship may still matter. Continuity between the past to the present and future remained essential for nation's stability 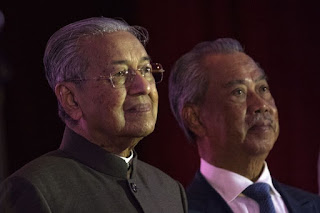 
The Chini by-election has been reduced to a Tun Dr Mahathir Mohamad versus Muhyiddin Yassin contest. The outcome of the by-election can gauge how much support Mahathir has compared to Muhyiddin. If Mahathir's candidate gets slaughtered it will be a big blow for the old man.

Not sure how the public accepted his view, but even within UMNO, it is viewed as a Dato Najib show in which UMNO headquarter gave him full discretion to strategise and run the campaign.

It was RPK's cheeky way of running Mahathir down. BN is expected to win handsomely in this state assembly seat in Najib's Parliamentary constituency. The victory or defeat to BN will only be measured by the size of majority for BN's candidate, Mohd Sharim bin Mohd Zin.

It is strange twist of fate that Muhyiddin's political fortune could be tied together with Najib, in which in this same month of June four years ago, UMNO had him expelled from UMNO for covorting with Mahathir to topple the President and Prime Minister.

Najib was only consequently deposed at the 14th general election in May 2018. 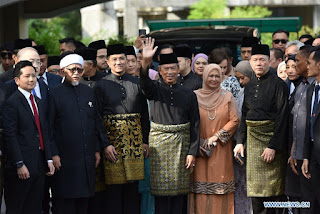 Muhyiddin was recently sworn in on March 1st, 2020 following Mahathir's unexpected and puzzling resignation on February 24th after refusing to lead the coalition of political parties and political factions known as Perikatan Nasional.

It is the stuff for a Hollywood political drama. Hopefully this time it is not Taek Jho Low raising the movie financing. It could certainly appeal to the action seeking Gen Y movie goers.

However, prior to 2016, the political rivalry between them were sober and boring. There were the usual competition in any political competition, but it never went further into an intolerable situation that leads to outright quarrel.

When Team Wawasan led by Dato Seri Anwar Ibrahim contested for the 1993 party election, Muhyiddin came up in the pole position. In the subsequent election in the November 1996, Tun Abdullah Ahmad Badawi came back into the line-up, Najib came first and Muhyiddin lost out.

There were bitterness among the supporters and few pointed their finger on Najib's unfair campaigning. Muhyiddin did complain of declining camaraderie but it ended because there were no opposition to him returning to cabinet. It is unlike the political rivalry between Tun Musa and Tengku Tan Sri Razaleigh Hamzah.

Muhyiddin was comfortable sitting in the audience for the next four years of UMNO General Assembly till his return back to the Vice Presidency in 2000.

Ever since 1996, Najib remained the first Vice President till he ascended to Deputy President in the 2004 party election, a year after Mahathir's first resignation as 22-year Prime Minister.

Pak Lah became UMNO President and Prime Minister till his resignation in 2009 following a dismal showing by BN for losing their customary two third majority in the 2008 election. 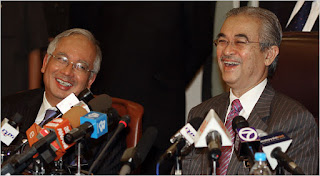 Najib was identified as successor on the condition he wins the UMNO Presidency in March for which he won uncontested.

Muhyiddin's path was more difficult as he had to contest against the popular Tan Sri Ali Rustam, the recently appointed Governor of Melaka and former Selangor Menteri Besar, Tan Sri Muhamad Muhammad Taib.

He almost lost it again in 2004 to thinly nipped pass Muhammad Taib on the last count of the Federal Territory ballot box to came out third. Tan Sri Isa Samad was first but later removed on money politics allegation. Ali came second.

Through the years, Muhyiddin's boys kept blaming Najib's side for making it difficult. Muhyiddin problem was the dilution from the competition of other leaders from his home state of Johor like Tan Sri Gani Osman, Tan Sri Syed Hamid Albar, and Tan Sri Sharir Samad.

Muhyiddin seemed less stern these days, but back then he was renown for being stingy with his smile. 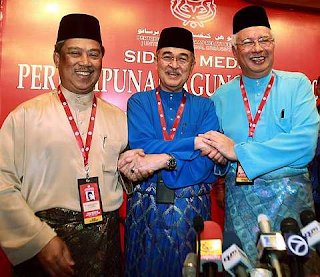 In the 2008 party election, the Deputy Presidency was up for grab. It is widely believed that Pak Lah was bitter with Muhyiddin for doing Mahathir's bidding to do the final push in the Supreme Council meeting to pressure him into resignation.

Ali, seen as from Pak Lah's camp, was contesting for the post. Muhammad Taib contested too and he was seen as splitting Muhyiddin's block. It would have sealed Muhyiddin's political fate. 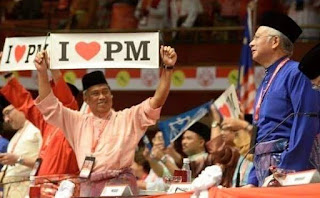 Against all odd, Najib made his preference for his friendly competitor, Muhyiddin for the choice of Deputy President and his Deputy Prime Minister.

It could be him repaying his indebtedness. The public preference was for Muhyiddin. However, Ali was more accessible and popular with the UMNO division heads and grassroot than the less obliging Muhyiddin.

Ali's campaigners were caught for money politics. Cynics still insist it was not left hand not knowing what right hand was doing. It was no fault of Ali, but he gentlemenly accepted the consequences. He was disqualified.

It should be an easier path to beat Muhammad Taib, but years later, Muhyiddin's boys admitted that it was not so and they won by riding on Najib's raft. 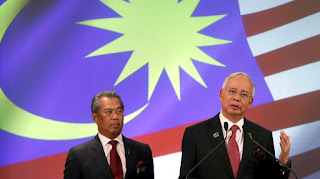 The rest is history, including Muhyiddin's attempt to do on to Najib as he did to Pak Lah for Mahathir's bidding using 1MDB as the basis. It failed and led to his dismissal.

Come 2018, he came victorious and eith Mahathir, brought UMNO to its knees.

By a strange of fate, Muhyiddin and Najib is on the same side now.

Though it is not so much for Chini by-election, they are together facing up to Mahathir's political onslaught and no holds barred from his bag of political tricks.

During the Restricted Movement Order, when all attention on social media were on the endless twist and turn of the deposed Pakatan Harapan political drama, Najib begin his attack on Mahathir.

Sometime in mid-May, Najib criticised Mahathir for playing innocent to refuse PN Chairmanship by claiming he did not wish to betray the people. He piled up on Mahathir's remark he was used by the Malays for 22 years.

And he exposed Mahathir's demand for a gambling license to be issued to Ascot Sports owned by Tan Sri Vincent Tan.

Najib has not relented with the latest series of exposure of government contracts and privatisation to Mahathir's millionaire and billionaire children.

It may have contributed to Mahathir further downward spiral in popularity, and his every political moves blunted and hitting the brick wall. 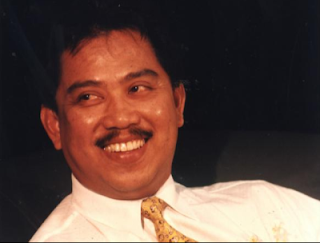 On reflection, had it not for Mahathir's toxic tendency to pit leaders against each other and destabilising divide and rule. the competition between Najib and Muhyiddin would not have intensified into an intense rivalry.

They did not cross path in the early part of their political history.

Najib begin his political career to replace his late father in 1976 in Pekan. He became Pahang MB from 1982 to 1986 before beginning his career at the federal level as Deputy Minister.

Muhyiddin political path begin in his home state of Johor. He started from the divisional level in Pagoh level to move up in the state Youth movement to be Johor Youth Chief for 1976 to 1982 and national exco member. 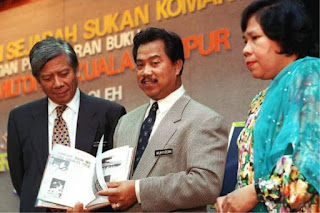 He remained MP for Pagoh ever since 1978 except for 9 year stretch between 1986 to 1995, in which he contested the Bukit Serampang state seat and was appointed Menteri Besar.

He joined federal cabinet much later than Najib in 1995.

Unlike Najib, Muhyiddin early entry into national level UMNO was patchy. He lost for a place in the UMNO Supreme Council in 1984 to only get a seat later by appointment.

His first attempt for Vice Presidency in 1990 also ended with a loss. 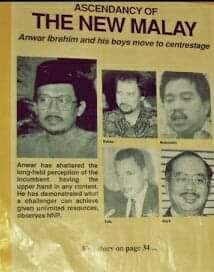 It was the 1993 Team Wawasan with Anwar, Najib and Muhammad Taib that brought a change of fate for Muhyiddin to be within the national political elite. 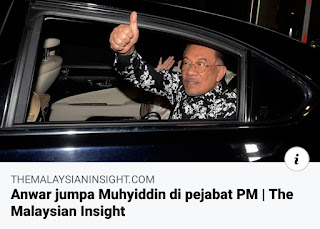 Rumours going around that Anwar and PKR will give their support to Muhyiddin against Mahathir's motion for vote of no confidence in July Parliament seating. It could be Anwar avenging the betrayal by DAP and Amanah to Mahathir's persuasion.

Muhammad Taib is no more active, but Najib is still around and fighting. Muhyiddin is the current Prime Minister

There will always be the speculation that the rivalry will persist. But with Mahathir still at large, Najib and Muhyiddin have a common purpose and enemy.

Who knows, the reunited remaining members of Team Wawasan can be insurmountable for their old master and his old foe, Lim Kit Siang's DAP.