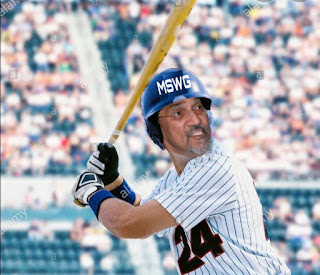 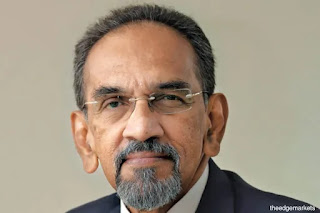 Blogger Nuclearbursaman here outrightly called him stupid.
The reason being the Special Report being prepared by Ernst & Young will be presented to Bursa, thus only EY and Bursa could provide for an indicative date.

Furthermore, blogger Depakata pointed out here, it "takes more or less around two week to appoint EY as independence reviewer on 14/06/2021 from the date KPMG was removed on 28/05/2021."

Logically, it would require a bit of time to review KPMG disputed questions.

Unlike the past encounter with the earlier CEO of MSWG during the ECM Libra-Avenue debacle, later crop of CEOs are more vocal and made their presence in the media.

So do Devanesan. Though the news reports are seldom rhetorical, chest beating, and short of a loud boasting barfly, it is still a good thing for MSWG to create public awareness.

It is only expected of them to raise concerns on external auditor's findings, removal of auditor, role of independent directors, their appointment, and remind on timely account delivery

But when Devanesan repeated his early call in July for a tentative dates here, it is excessive application of pressure on Serba management. It raised the question:

Which team is Devadeson batting for?

MSWG been doing good work in shareholders activism, but the organisation is not structured for the best interest of the general minority shareholders. It is representing the needs and interest of institutional investors, which for practical reason, exploited and manipulated naive retail investors. 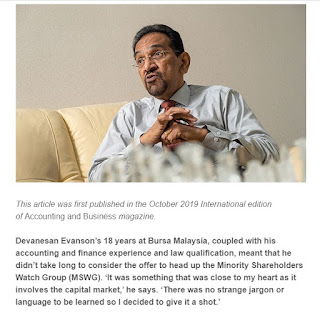 Sarawak Kini have repeatedly raise issues with the far from swift action of Bursa. They should be on top of the situation because Serba responded to Bursa's enquiry to issues raised by KPMG since May 28th.

It is coming to three and half months, but nothing is forthcoming. Yet Devanesan is deflecting pressure to Serba. It makes it obvious that MSWG is the voice of Bursa.

The reason could not be so much because the Board of Directors of MSWG are Fund Managers, Accountants, Bankers and lawyers. [Take note their website is not updated. Current Chairman is Dato Nasir Ali.]

Neither is it entirely due to MSWG being funded by Capital Market Development Fund, thus will be beholden to the establishment. Nor is it because the founding organisations are LTAT, PNB, EPF and LTH.

Devanesan had 18 years experience at Bursa in regulatory and market operations!

CMDF is inextricably linked to Bursa. For professional or selfish reasons, he may have avail himself to voice for his former employer's concern.

Conveniently, Devanesan could claim it is to serve the interest of the investing public and minority shareholders. 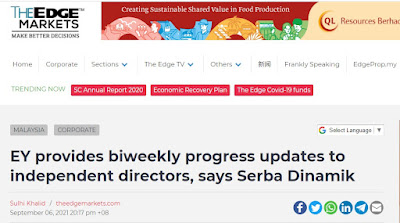 Bursa could have spoken for themselves but they did not. It is suspiciously looking as if MSWG is setting the volleyball for Bursa to spike.

The more likelihood is the MSWG CEO is involved in a cover-up for Bursa. In the Edge report dated July 12th here, it is mentioned:

Bursa had previously ordered the scope of the independent review to be the same as agreed between Serba Dinamik’s audit committee and EY on June 15, which had been presented to the regulator. Serba Dinamik had said then it was in the process of appointing EY, but was awaiting KPMG’s response, including a written confirmation of its cooperation.

The exchange also demanded that the reviewer reports directly to Bursa and the Securities Commission Malaysia (SC) on the progress and findings. The reviewer must have a presence where Serba Dinamik’s customers and suppliers are located, it added.

Serba's independent director and Chairman of Audit Committee, Johan Ishak committed to say to FMT that there will be no compromise on any wrongdoing uncovered.

It is quite the typical cliche denial or the accused putting up a bold front. But this is the new independent Director talking and they are all under the public spotlight to do right. By saying they will take action should any wrongdoing found, he is confidently claiming thus far no wrongdoing discovered.

Are these the reasons Bursa is not talking and SC worried KPMG will lose their case?

If so, MSWG is not independent and fair minded, but bias in favour of the establishment, authority and funder. Nuclearbursaman called for Devaneson to be removed for this attempt to cover-up. Does MSWG have the balls to do so on a Bursa man?

Voice for Big 4 too? 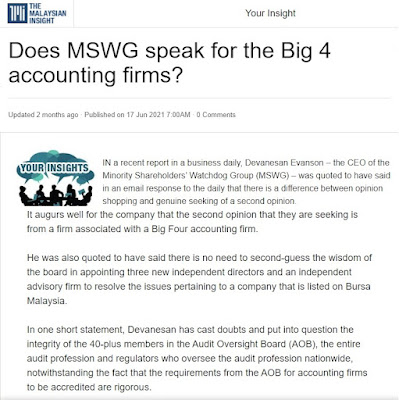 Trained as an accountant, there is a natural tendency for Devanesan to be in awe of the big 4 accounting firms dominating the Malaysian market.

To The Malaysian Insight columnist in June, he seemed to be speaking for the Big 4. In defense of the Big 4, Devanesan lambasted SC's Audit Oversight Board (AOB).

Currently, it does not jive because the big 4 are in a string of audit tussles. The agreement for Deloitte to compensate Silverbird for RM324 million was recently made. In the UK, KPMG is caught providing misleading and false fact on the Carillion audit to the Financial Reporting Council.

Is a similar happening in KPMG's report to Police, Bursa and SC's AOB? Tic toc tic toc .... time is running on Bursa, SC and KPMG as well as MSWG.

Conflict of interest. KWAP ppl also inside MSWG BOD. Bankers have interest in loans to SD.