Are many parties including MACC's AMLA Division covering up for Zeti? 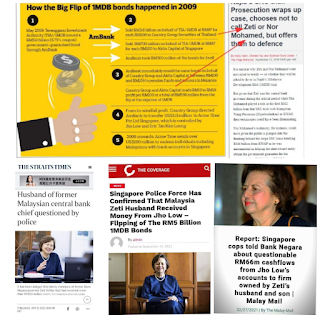 Despite SRC guilty judgement, many would wonder why this whistleblowing blog remained defensive of Dato Seri Najib in the SRC-1MDB debacle. Is this blog defending a corrupt act that is globally known?
At times, this blog defended wrongful allegations as made against previous Tabung Haji management and malafide intention of LHDN to bankrupt Najib. The defense of Najib is purely motivated for the same PURSUIT OF TRUTH AND JUSTICE.
When doubts are visible, legal process suspiciously tampered, and widely mentioned in the legal fraternity of judges and DPPs can be bribed or pressured to follow instruction, one cannot completely believe statements of officials, and mainstream media report.
Tan Sri Dr Zeti Aziz's family accepted laundered 1MDB money from Taek Jho Low in Singapore. It is suspected to be "bribe" for Zeti to get BNM to approve certain transactions.
Yet, High Court refused Najib's request  for documents on Zeti, Mahiaddin-friendly media dispelled as "fishing expedition", and Sarawak Report accused Najib of fixing Zeti. More so, Zeti was not called by the court and prosecution did not bring her in as their witness.
Truth and justice could be denied in the 1MDB-Tanore too. In fact, not only BNM and police is seen so, but MACC could possibly be covering up from prosecuting Zeti.
This is not in anyway intended to pile up more pressure on Dato Azam Baki.
Zamri cover-up? 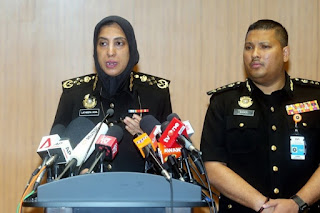 A Little Bird alerted that the Deputy Commissioner of MACC for AMLA, Dato Mohamed Zamri bin Zainul Abidin is aware of Zeti's family receiving money from Jho Low in Singapore.
Zamri is the notorious looking fella next to the then Chief Commissioner, Latheefa Koya enjoying himself during the revealing of audio tapping of Najib to media.
As AMLA chief, Zamri would have been tasked to prepare the Investigation Paper on the involvement of Ambank Berhad and Ambank Investment Berhad in the issuance of 1MTN RM5 billion bonds in 2009 till 2014 for TIA/1MDB.
Little Birdie claimed Zeti's name appeared in Zamri's IP. There was a significant section dedicated on her husband receiving "bribes" from the laundered 1MDB money. However, Zamri did not take any further action.

Logically money laundering falls under his jurisdiction. An indication of knowledge is the presentation is made at a conference organised by United Nation Office on Drugs and Crime in mid-May 2019. He mentioned the secondary subscribers of the RM5 billion 1MTN bonds issued by TIA/1MDB.
Back in March, this blog wrote a piece entitled, "Zeti, Ambank, Goldman and Jho Low colluded for a bite of 1MDB bond". It was wrapping together revelations and questions by pro-Najib facebooker, Ms Lim Sian See on the on-going 1MDB-Tanore. 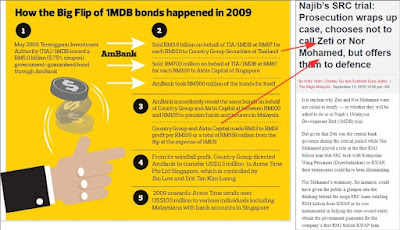 Mentioned are the secondary subscribers, Country Garden Securities Thailand and Aktis Capital Singapore as conduit for money to be channeled to Zeti's husband and an Ambank top executive.
Both the subscribers are linked to Jho Low.
Little Bird further claimed Zamri explicity written Cheah Teck Seng channeled money to a proxy account of Tan Sri Nor M Yaacop in Singapore and another secondary subscriber transferred money to the account of Zeti's husband, Dato' Dr Tawfiq Ayman.
If so, it answers the questions posed by Lim Sian See then.
BNM cover-up? 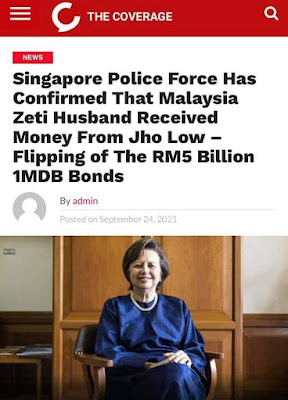 The issue had a revival following a recent posting by The Coverage that went viral. The Coverage highlighted the fact revealed by The Edge in March that:

... Commercial Affairs Department (CAD) of the Singapore Police Force had in 2015 and 2016 shared information with Bank Negara Malaysia about suspicious transactions involving Iron Rhapsody Ltd, which had a bank account at UBS in Singapore.
Tawfiq and a son are beneficial owners of Iron Rhapsody, according to CAD.
In reply to a query, Bank Negara said it was unable to respond, as it was “bound by the international protocol for sharing of financial intelligence”. Singapore police alert to BNM was given wide coverage by media in February. [Read Mkini, FMT and MMO here, here and here, respectively].
Few days ago, Lim Sian See elaborated her suspicions that BNM cover up for Zeti and her suspected role for a share of the "benefit".

July 2007: Jho Low and Zeti's husband were already partners in a company (that will later on receive US$153mil from 1MDB).
Jun 2008: Zeti's husband already received millions in payments from Jho Low.
July 2007 and June 2008 are significant dates as this is before 1MDB were formed or had any money. It was also before Najib became Finance Minister or Prime Minister in April 2009.
As we all know, every single Ringgit that were later found to be misappropriated was after 1MDB had transferred overseas to GoodStar owned by Jho Low and the fake Aabar.
But for 1MDB to transfer hundreds of millions of US Dollars overseas, they would require BNM approval.
Now, is it any wonder why BNM would approve FOREX transfers by 1MDB to fake companies when even simple online company checks by BNM would know those companies are fake or owned by the wrong persons?
And is it any wonder why Zeti advised Najib to open a bank account in his own name and failed to monitor Najib's account for suspicious transactions even told she was told by Najib to monitor and clear those transfers?
Has anyone ever asked why BNM and Zeti could have "failed" in carrying out their duties for such easy and basic checks which they were made responsible for?

Singapore police passed evidence to the crook to investigate itself.
Police dragging feet, Zamri's silence
BNM is under the microscope for having received information from Singapore police but not acting on it. Najib could make another police report against BNM as he did against LHDN.
Though Malaysian Police may not been told by their Singapore counterpart, there was a police report made against Zeti and her husband to initiate investigation.
In March and April, police confirmed Zeti's husband and children were under investigation, got called in and investigation still on-going.
Police could secure information from BNM and possibly MACC. They could get in touch with Singapore police. It is end of September but surprisingly still no new development.
Since Singapore police completed investigation and Tawfiq's money confiscated, it should not be too difficult to extract the evidence to link Zeti to her husband and son.
It seemed police is dragging their feet to buy time. But why and for whose benefit?
So do not blame the public should the Court, Police, BNM and possibly AMLA Division of MACC are perceived to be in-cahoot together to cover-up Zeti. By common logic, it is too obvious.
In the meanwhile, Zamri appeared silent for fear his NFA of Zeti be scrutinised. However, Zamri is in the radar of bloggers and social media.
In the recent uproar on the loss of money evidence involving Dato Azam Baki's boys, Sabahkini2 somewhat accused Zamri for silently instigating the issue that could put the Chief Commissioner in hot soup.
No proof shared. And there are possibilities of internal manovering to replace Azam and certain parties covering their track.
Minister Dato Wan Junaidi defended Azam. Unless proven, he cannot be blamed for wrongdoing of others. But the pressure will be on him for they are his boys and public is curious on what actually happened to the evidence.
In the case of silent Zamri, if documents exist as Little Bird claimed, he can be proven for covering up. It could be the documents that could prove coordinated conspiracy to blame and fix Najib but rejected by High Court and brushed off by mainstream media.
Truth hidden and justice denied.
* Edited 30/9 7:00 AM
at 9/29/2021 03:32:00 PM

As Whitlam said about the Queen who sacked him in 1975: "Well may we say God save the Queen. But nothing will save the governor general" (the Queens representative in Australia who did the sacking on her behalf.

Zeti made a several fatal mistakes by setting up DS Najib. It opened up her job and her duties at the Bank which incuded the obligatory disclosure requirements to reporting to parliament and to the police and other banking authorities about money laundering.

There will be follow ups iof you need them.