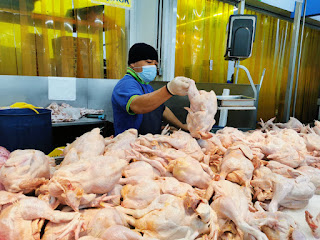 Singapore's CNA reported last week that the first shipment of chicken from Indonesia is due to arrive in August [read here], The Indonesian government is urging their companies to use the entry into Singapore to pursue the export market [read The Star here].

In another report today, the Indonesian plan to set-up chicken farm on Pulau Bentan for the Singapore market [read here]. The Malaysian government particularly Jihad Inflasi taskfore is still blur.

Do those in charge have foresight to see and exploit these chances?

THERE is a Chinese saying, “A crisis is an opportunity riding a dangerous wind”. Despite the current bleak outlook of the global economy and food shortage crisis, all is not lost.

The Malaysian government should take advantage of the current malaise to reverse the chicken export ban policy, address food security concerns, and turn chicken farming into a major export-driven industry.

The current global economic concern is the anticipated recession that is happening in the midst of the rising US dollar, a hike in key interest rates, and high inflation. The anticipated post-pandemic reopening of the economy was stunted by the war between Russia and Ukraine.

The bleak global economic condition came with widespread shortages and a rise in food prices. Indonesia, India and even Malaysia recently resorted to halting food exports.

If only the country had taken Tun Abdullah Badawi more seriously 20 years ago, Malaysia could have corrected the over-dependency on food imports. Tun Daim Zainuddin was too late to express concern for food security in 2019.

The structural rut is permanently set.

Despite the shroud of concern for food security, there is an opportunity particularly in the chicken supply industry as it is a popular source of protein.

Two factors contribute to this optimism:

Firstly, poultry price data from 92 countries globally compiled by www.globalproductprices.com for March 2022 placed Malaysia as the 4th cheapest, which is 6 spots lower than Thailand and nowhere near Vietnam, Indonesia and Singapore.

Secondly, Malaysia has the capability to produce grandparents stocks down the value chain, providing a local and cheaper source for day-old chicks. The rearing of meat or egg could achieve the desired specification, with the feed and growth efficiency.

At the top of the poultry industrial structure are the pedigree selection and genetic improvement stage, which produces great grandparent (GGP) stock. This is globally dominated by few companies.

From the outsourced GGP, Malaysian companies could produce grandparent stocks, parent stocks and day-old chicks. There on, there are an abundant number of players in rearing chicken for layer (eggs) or broiler (meat), processing and chicken products.

Unlike Malaysia, Thailand produces more chicken than its domestic requirement and has turned itself to be one of the top 5 exporters of chicken in the world. Malaysia should emulate Thailand and earn export revenue.

Malaysia is currently over-dependent on oil palm, oil and gas, and electronics for foreign exchange. Over time, chicken export could be another major source.

Opening up the border for export enables economy of scale to be achieved and could buffer the local price with the larger profit margin gained through exports. It creates the necessity to maintain stockpiles and ensure continuous supply locally.

By overproducing and having 40% of its production meant for export, the abundance naturally averted Thailand from a chicken {shortage}.

The poultry industry players could complement the government in their role to stabilise local prices from major price fluctuation. The market should be freely allowed to determine its own production and price level.

Businesses are sensitive and responsive to market and customer trends. When prices are high and supply is low, farms will produce more and new farms open up to meet the demand. When the price is low and supply is excessive, they will adjust the production accordingly.

It is more effective than bureaucratic government-regulated pricing, which lags in reactions, and is often over or under-reacted. Government and industry could collaborate in coming up with the most effective mechanism.

A case in point is the drop in chicken prices to RM8.90 per kg in a matter of days after the newly instituted price ceiling at RM9.80 per kg. Prices were stabilised through collaborative efforts of the Agriculture and Food Industry minister and industry players.

The cartel accusation hurled at industry players is brushing all with one stroke. At 5% gross profit margin, it hardly resembles a cartel. The narrative accusing processing plants of devouring excessive profit is unfounded. There is a weight loss of 18% after chickens are cleaned, innards removed and inedible parts discarded that need to be considered in the calculations.

The overwhelming reason to lift the export ban to Singapore is to honour a bilateral agreement between former prime minister Tan Sri Muhyiddin Yassin and his counterpart Lee Hsien Loong prior to reopening the border between Malaysia and Singapore.

Food security was one of the items agreed on. Chicken is a popular item on the menu. Malaysia cannot be viewed as unreliable by its most important neighbour.

Certainly, it is pitiful that friends, families and “saudara mara” (relatives) in Singapore are having chicken rice without the familiar taste and texture of fresh chicken. The ban also affected the livelihood of Keluarga Malaysia locally where Singapore has a large-scale investment in food production centres in Sarawak.

Putting aside prejudices, Malaysia’s food security would be greatly enhanced by exporting local food abroad because it improves bilateral relations and this enables the sourcing of other essential food from outside.

The immediate concern is to elevate labour shortage. The effort to bring back foreign workers has been a snag. The simple solution is to cut out intermediaries and allow the private sector to handle its own labour sourcing.

There should be serious effort to minimise the overlapping of authority and the mismanagement of resources. These problems need hands-on knowledge, experience, and understanding of farmers’ livelihood in order to be resolved.

This is more crucial than putting effort into media hype such as talks of growing corn grain for feed, which is basically putting wool over your eyes. It is proven to not be economically viable.

The most important factor is the support from the Veterinary Services Department. Government-to-government arrangement usually expedites import and export between countries.

Whenever there are export bans, trade sanctions and shortages, the void is usually filled up by other countries. The export ban on cooking oil by Indonesia has led to shortages in India and China but was quickly replaced with corn oil from Russia and Ukraine.

The same goes for chicken. Indonesia and Thailand have filled up the void in Singapore. But recently, a Malaysian company was invited to run poultry farms in Pulau Batam. So Malaysia needs to move fast on this. – The Vibes, July 25, 2022