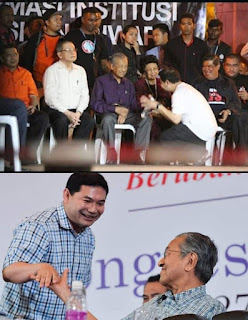 Rafizi is creating a political illusion because Atoq fear Najib will be acquited due to Nazlan Ghazali debacle and embarassingly faulty judgement of Nazlan and COA.

The optic surrounding the SRC case too overwhelming. If the put side to ignore the revealed e-mail and leaked MACC IP of Nazlan, judges in Malaysia will be looked upon as pariah.

A mistrial will invite unprecedented public outcry and scrutiny, and internationally, put into question the integrity of the whole system of law enforcement and justice albeit downgrade Bar Council to level of garbage collecting Town Council.

According to sources that has proved reliable, consistent and has direct contact to the man, Mahathir is no capability to articulate and publicly debate issues. It will allow his senility to be observable.

For a year, tell tale signs are emerging as he is getting repetitive, could only regenerate opinions from past, and slowly unable to incorporate new information.

So it is Rafizi continuing Mahathir's version of zikir to chant Najib, Najib, Najib ... using the ludicrous Sulu claim as starter.

Do not be surprise Daim Zainuddin is bank rolling his campaign and manouver to gain control of PKR.

Interestingly Suluk based party Warisan is synchronising with Rafizi's stunt. It was Shafie the Suluk who as CM gave acknowledgement to the claim by participating in the court proceeding stunt in Spain thus giving it a faint legitimacy.

It is not the first time but throughout his tenure as Foreign Minister, Anifah Aman treated any Suluk claim as though they do not exist thus it could not progress any further. Worsening the situation is Tommy Thomas naive letter of acknowledgement.

As far as I conclude and will not be bothered to indulge in any new legal trivialities, the Suluk has no locus standi and has no basis of history to make any claim.

The stunt by Rafizi is indirectly reviving blame towards Anwar Ibrahim and names like Tian Chua and Sivarasa will resurface. His intention becoming more obvious as days go by. The 2013 blog below quite telling:

The news below reported in the Phillipines back in 2013 below:

Meanwhile, the incestuous repeatition of legal blame on Najib is but an amaterish attempt to do a political psychological game.

It does need a pentaksub or avid supporters of kluster mahkamah to figure out that it is meant to dampened the Najib pull at by-elections and throw doubt into the simpleton folks' mind of his appeal as a rakyat concerned leader.

Revolting to the stomach of many, does anyone think the current crop of political leaders are so?

From Mahathir, Anwar, Kit Siang, Lim Guan Eng, Hadi Awang, Mat Sabu and Muhyiddin to the current crop of Ismail Sabri, Annuar Musa, Hamzah Zainuddin, Hadi Awang, Takiyuddin Hassan and so on proven or displayed their tenacity to put the rakyat welfare foremost in their mind above politics and personal interest?

Lets cut to the chase and remind ourselves that the Suluk attacked Kg Tandau, Lahad Datu Sabah in February 2013 and caused the brutal death of policemen.

That is sufficient ground to strategically end diplomatic gestures to the Suluk which have been receiving aids and political shelter from Malaysia.

So lets not mess our mind to get into the stupid and never ending legal megal hair splitting nonsense. We are literally at war with the Suluk and should be uniting than get dragged by pre-election political play.

Lawyers' opinions is the least relevent and merely supportive in nature but not the prime consideration. Excessive legalising is an obstacle to solution.

Get strategic and perhaps, prepare millitarily!

The coordinated attempt by the slanderous and toxic Rafizi is only a reminder that the leopard cannot change his spot.

There is nothing progressive and no positive proposal from him to move us ahead but shallow fault findings and character attack antics that kept holding us back.

Rafizi has no original ideas to solve problems of the day, rebuild the nation and any plans forward.

The new generational politics emerging will be hijacked and Ayuh Malaysia-ed by Rafizi will degrade it back into the same ole same ole ... sickening, unethical and immoral politics from GE13 and GE14.

The end cannot justify the mean. The mean and the end must be justified.