Is this the real life?
Is this just fantasy?
Caught in a landslide
No escape from reality
Open your eyes
Look up to the skies and see
I'm just a poor boy, I need no sympathy
Because I'm easy come, easy go
A little high, little low
Anyway the wind blows, doesn't really matter to me, to me

Mama, just killed a man
Put a gun against his head
Pulled my trigger, now he's dead
Mama, life had just begun
But now I've gone and thrown it all away
Mama, ooo
Didn't mean to make you cry
If I'm not back again this time tomorrow
Carry on, carry on, as if nothing really matters

Too late, my time has come
Sends shivers down my spine
Body's aching all the time
Goodbye everybody - I've got to go
Gotta leave you all behind and face the truth
Mama, ooo - (anyway the wind blows)
I don't want to die
I sometimes wish I'd never been born at all


After so much eventful incidences in Ijok heard, we decide to make a day trip to Ijok. So happen, we were invited to witness the opening of PeaceMalaysia’s Medical Relief Centre. We left Kuala Lumpur around 1:00 pm.

The blogosphere has been bombarded by news of a war of sticks and mineral bottles, thankfully not stones, on nomination day. With majority of bloggers being Keadilan sympathisers, we could hear more of the Keadilan side.

I saw Azmin’s MalaysiaKini.com interview and the pile of mineral bottles and few sticks. Ah! MalaysiaKini. Remembered the words of their reporter in Kota Baru, "We give the coverage for other than Government." It wasn’t an eloquent explanation, so I take it with reservation.

I went there to get the UMNO-side account of the nomination day incident. On Saturday, we already had a laugh of one Keadilan member’s account of the event. So this the story I gathered. 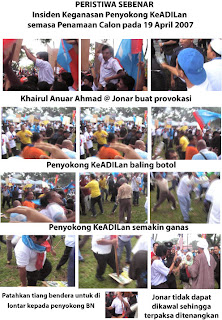 Khairy was stunt and Dato Seri Hishamuddin rose to Khairy’s defense. The chanting changed. Somewhere in there Dato Shahidan Kassim joined the fray and the chant changed again. Some names or rather. Both got stunt and embarassed. The chant was provocatively personal and allegations.

In the heat of the moment, one innocent empty mineral water bottle came flying from the Keadilan side. Our source said, someone told one MIC member to throw back the bottle but the MIC people ended up throwing more. So, the “battle of bottles” begin. I guess thats how all war got sparked.

I saw it as an effective Keadilan provocation to incite the UMNO crowd and later effectively blame them. Its just a game. All the comentators told me the same thing, “Dua-dua sama saja” (Both aside equally at fault). Unless one can fathom its significant, this is a typical psycho game on election nomination day in yet to mature Malaysian politics.

However, the incident on Jeff Ooi’s Lensa Malaysia team is uncalled for. I must say it is a genuine complain. Not only Rocky’s UMNO friends regretted teh incidencee, I explicitly expressed my disagreement to few UMNO Youth members and was acknowledged.

Surprisingly, Khairy should have done the politically correct thing to condemn the action but chose to deny. From day one, many spoke of the theory that Khairy’s behaviour was an act of sabotage designed to find excuse to oust Dato Seri Najib and Dato Seri Khir Toyo. The usual reaction, when any party lose a shout match, is to turn into a dignified act rather than losing their cool. Perhaps it is Oxfordian civilry message of “Don’t enter my turf”. 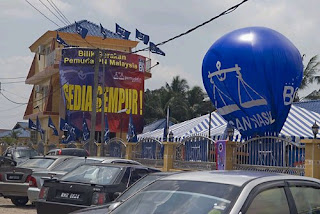 The prominent Pemuda UMNO operation centre near to the said incident

By 2:00 pm, we reached the Bilek Gerakan meant as PeaceMalaysia’s Medical Relief Centre at Kampung Bukit Badung. Along the way, you would see rows and rows of UMNO and Keadilan encampment. The way UMNO work, each targeted area is hosted by an UMNO Cawangan has a Selangor UMNO Division and a State UMNO assigned. The state UMNO assigned is Perlis.

Kampung Bukit Gadung is seen in MalaysiaKini’s report on past 2004 election (taken from Jeff Ooi's blog) as a black area for BN. Below is the report: 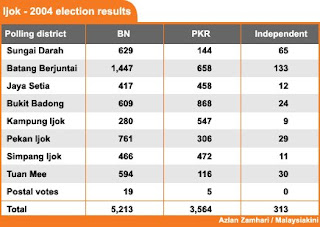 By 2:30 pm, Dato Mukhriz came and made a simple official opening. Villagers of mostly old folks and children begin to trickle in. Its conveniently at the Kampung's entrance. One really sickly old man arrived with a PeaceMalaysia volunteer and gasping for breadth. Dato Mukhriz hurriedly brought him a chair to sit and ease him to catch his breath. I guess its unlikely he could turn up on polling day but sometimes it is not about vote but purely from the heart. 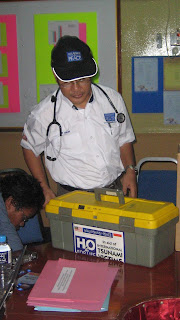 Dr Halim Abdullah or playfully called by one YB as Dr Labia, is a Gynaecologist and Veteran of all PeaceMalaysia International and Local Relief Missions 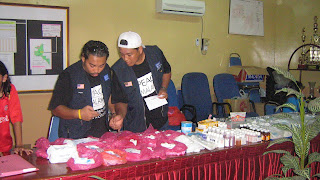 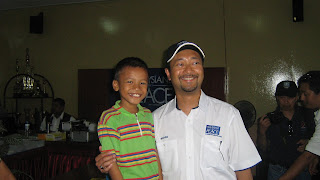 A jovial local kid gets a hug from Dato' Mukhriz Mahathir

The Centre will close around 6:00 pm and the house to house visit is to follow. Keadilan also had their Medical team in the Pekan.

Around 4:00 pm, we left to meet some FT UMNO people at one mamaq shop in town, Restoren Zafrullah. The restaurant was just in front of FT UMNO headquarter. We met a group of UMNO people having their late lunch and joined in.

Few UMNO Ketua Bahagian joined our table and we had a great conversation till political celebrity blogger Sang Kelembai came to steal our show. While we were exchanging political jokes and banter, we brought up the issue of Internet and bloggers.

“In two to three elections time, the Internet can change the way of local politics and you guys better buck up”, we said. One of us interjected, “First thing you guyws should do is get rid of Pak Lah and Khairy.”

Suddenly a group of Keadilan came in the restaurant for their late lunch, I was looking at the nearest exit if any ruckus happens. I don't see any mineral bottle water around but lots of teh tarik glasses.

From from one corner, one UMNO man hollered, “Yem, amacam kempen?” One of the Keadilan chap turned around, “Baik!”. He must be Yem then. “Tak payahlah kau, tak ada can lah” the UMNO responded. “Menang kali ni”, Yem swiftly denied confidently.

They must be local politicians and know each other well. Whats on the Internet and whats on the ground are different things. Perhaps all these fights are merely outsiders. There seemed to be more party workers than voters today.

By 5:00 pm, we left home. Just at the peripherel of Ijuk, a nice banner of www.ijok.net is seen. So UMNO has embraced the Internet and blogs for by-elections politics. I didn't see it for Machap or Batu Talam. Thats how tight and bitter the rivalry, when it involves Keadilan.

On the way back, our conversation in the car was about Keadilan’s campaign that is based on personal and allegation, which is subjudice for Dato Najib to answer. This is another Keadilan perception game, knowing Dato Najib is in no position to comment.

Naturally, the background of Tan Sri Khalid came up. He is a man clean and professional man till he bought and managed Kumpulan Guthrie. Then all those strange manouver in raising money for the purchase, his bad foray into Indonesia, and questionable management practise. Hmmm ... that makes for a good blog posting on the "ketokohan" of this Corporate Personality.

By the time we reached Kuala Lumpur, I suggested we take a look at Tan Sri Khalid’s home on Bukit Damansara. And we went. 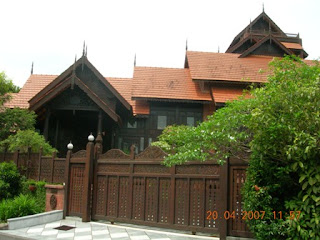 By 6:30, I was dropped off at Bangsar Putra station. Before I got out of the car, I said, “This Ijuk by-election regretfully will turn out to be a by-election based on race.” I was only glad it was not UMNO but Keadilan. This will be an answer to reply to allegation of communal politics by other political party. They claim they are not, but when the need arise at elections, every party is practising it.

*cough cough* *pokes a voice in the belly*

Eh then what's your take on pemuda umno going after khalid ibrahim entourage and harassing jeff and friend?

i know you are trying hard to be impartial. i hope i really dont see anything in between the lines.

Mana boleh! To be frank, i cant do that. i better admit!

Politikus - You are sounding like Anwar already. He is very flexible, you know what I mean. Tak takut ke?

If you stand in the middle of the road, you'll get hit from both side.

I agree with you. So know the road you are travelling on.

p/s few more hours will be out of the rat.. ha ha ha

Salam to A voice.
Bohemian Rhapsody. What a song. The sad and melancholic voice of Freddie Mercury, how can you not like that song.( will put as my next song).

TQ for describing the UMNO side of the story.I think thats fair.We read/listen to both side of the fence and we decide which is the more acceptable explaination.
Or we can ignore both accounts and say these are all bullshit.
Off course we will expect UMNO guys to believe more of the UMNO version.PKR will only believe their version so is PAS, DAP and whatever other parties.

I might not be an UMNO member but there are still a few good UMNO guys who are( trying hard too maybe)analyse things with knowledge and proper methodology, and they give a comprehensive report/articles/write-ups to convince others to support their party. I think you are one of those.I've never read you forcing down our throat to accept UMNO. You try to convince us that UMNO is still relevant. Thats okay with me. Most UMNO guys that I know( my friends lah) they force you to accept UMNO. This only made people frown on UMNO.

TQ sir, for allowing non-UMNO supporters to give views in your blog.

(If we want freedom of speech,we must also accept the freedom of others to critised us,betul tak?
Saya sudah bersedia utk di tegur.)

I was involved (on the grounds)with by elections BN contesting against Keadilan Teluk Kemang, 2000, Lunas, 2000, Indera Kayangan, 2003. All the same. The fight broke because Keadilan members provoked and hurled profanities against BN leaders (which is unbecoming and no relations to the local constituency issues.

On polling day, the also resort to the tactics of causing traffic jam (hogging the narrow roads for no reason!)in the constituency and same provocation at polling station, to create an unpleasant exchange of profanities (both, only to keep voters away).

The truth is, Keadilan have no local issues to address. Yes, they are a party of mob hooliganism.

Hhmmm, I wonder who is their paymaster ... DUH!


it also happened to for many many years Ijok until someone died then suddenly. then they came calling with goodies. I can bet after this its back to square one. this BN candidate can never raise his voice louder than the master. and all funds for ijok will be dried up faster than floods. in the end also NOTHINGNESS! oh! not nothing the POTHOLES will make a comeback soon.