Lucky Man: The Award and 5 Blogs That Make Me Think

Press the You Tube link for the progressive rock group Emerson Lake and Palmer’s live performance of Lucky Man.

I am playing the Lucky Man simply because I’m lucky to be noticed, acknowledged and nominated by two bloggers for the Thinking Blogger Award - Biggum Dogmansteinberg and Clark Gable of Pulau Duyong. Unlike others, my award icon is shadowed to depict the double nominations.

I noticed Clark’s nomination earlier but decide to ignore it till he informs me in my blog comment. I was actually engrossed then with something else to do the tag. Now, I can ignore my buddy Big Dog and must acknowledge Clark’s nomination also (although I couldn’t find where his nomination posting is).

These memetag started in February 11th, 2007 by a blogger, Ilker Yoldas of The Thinking Blog. Enter his blog to understand the purpose and rule of the tag.

To me, the most significant distinguishable trait to differentiate a person from another is in the mind. In the opening statement of James Allen literary work, As A Man Thinketh (1902), he well described a Thinking Man in the power of a human mind.

Mind is the Master power that moulds and makes,
And Man is Mind, and evermore he takes
The tool of Thought, and, shaping what he wills,
Brings forth a thousand joys, a thousand ills:—
He thinks in secret, and it comes to pass:
Environment is but his looking-glass.

Art afficiando would know of "The Thinker", a great sculptural work of the great French artists and sculptor, Rodin. 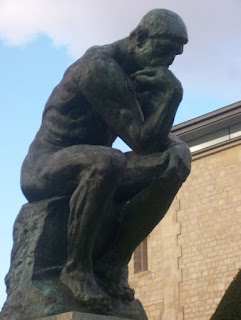 "The Thinker" was a bronze statute that became instantly recognisable icon of intellectual activity. Over twenty cast of this Rodin’s sculpture are available in museums all over the world. The original remain in Paris at Mesee Rodin.

Aguste Rodin (1840-1917) created "The Thinker" in the tradition of Michaelangelo but depart from the conventional "decorative, formulaic, or highly thematic" work of the time. He represented intellect and poetry by modelling “the human body with high realism, and celebrated individual character and physicality”.

Coming back to the award, I accept this nomination as acknowledgement for my humble thoughts as written in simplistic words garnered from my limited vocabulary and literal ability.

To accept this ward, I am required to tag '5 Blogs That Make Me Think' and that will be strictly the criteria I adhered to. I will not subscribed to any party or ideological affiliation for I believe in listening to “others” to strengthen and improve ones own belief.

My 5 nominated blogs are:

1. Analisismalaysia of Analisis Malaysia is a new blogger that came into the scene just around the recent marathon of by-elections. His or her common sensical analysis of the political scene from the BN perspective caught my and many attentions. I have no doubt that the blogger can be self critical too.

2. Rudin X of Boneka, Penyu dan SPR, is a PAS party worker, which I previously had a positive engagement (under a different psudonym off course) in a different forum. His lyrical and cynical description and analysis of the Malaysian electoral process is insightful.

3. Shaiful Bahri Saidin of Apa Ada Pada Name is not only a blogger but a regular contributor to the Malay mainstream newspapers of Berita Harian and Utusan on political and public interest issues. If I could describe his political orientation, it would be an UMNO with a pro-Pak Lah stance. I would consider his Blog the best in the rather limited depth and defensive UMNO pro-Pak Lah Bloggers.

4. Ktemoc of Ktemoc Konsiders is one of the earliest Socio-Political Blogger that caught my attention. I believed he is Chinese and pro-opposition but I appreciate (or perhaps agree) with some of his honest analysis. A case in point is his persistant refusal to accept Anwar Ibrahim.

5. Rustam Sani of Suara Rakyat [Vox Populi] is chosen not because I am trying to balance out for Anwar's cause. He himself is an intellect worthy of my attention. Apart from his position in PKR, not many is aware that he is the son of Ahmad Boestaman. His father could be categoried as a Malay Left and behind the Kesatuan Melayu Muda (KMM) and Angkatan Pemuda Insaf (API). This is an anti-British group that is one of the earliest Malay groups to declare independence as its mission. I met Rustam in New York when he was doing his doctorate at Yale. The little that I know of him after Yale was that he was with ISIS during the times of Dato Dr Nordin Sophie. He used to write a regular column in Utusan Malaysia when his works were acceptable for mainstream publication and believed he lectured at one local University. I was only aware of his father recently.

There you have it. My rather wide ranges of bloggers that make me think.

Being doubly tagged, I have 5 additional nominations but I will use only 1. That is for Shar101, a commentator worthy of this award. Off course, he has to start blogging. Are you gonna keep us waiting Ole’ Blue Eye?

Excellent choice bro!
There are so many excellent blogs around. No wonder some quarters are so restless.