MAS is Burning, Butcher From Shell Is Fiddling

After the "MAS Flight Delays: Idris Jala Lied" posting yesterday and Rocky's "MAS vs AirAsia" breaking news today, an SMS updated me that the flight delays is running into 20 a day and not 30-40 delays for the past 2 weeks. The truth is out there but lets read NST Monday July 16th report below:

Fury after being kicked off flights

SEPANG: The mood was ugly at the Kuala Lumpur International Airport (KLIA) yesterday. Hundreds of passengers were stranded and some, facing delays, were furious when informed that their Malaysia Airlines flights were overbooked. 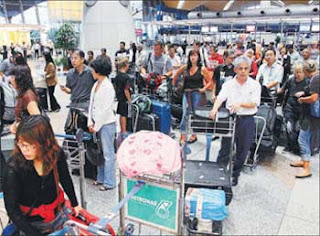 Perth-bound MAS passenger Darren Woon, 25, was upset when told his flight was full.

He claimed a MAS employee said it was overbooked by 50 people.

"I can understand if it’s just five people ahead of me, but 50?

"They didn’t even make an effort to contact us. They merely waited for us to turn up, then tell us the bad news.

"This is so unprofessional."

Woon claimed he was supposed to be at work today in Perth.

Foo Ee Lin, 26, who was sending off her 17-year-old sister to Melbourne on a MAS flight, was outraged when told that the flight was overbooked by 60 passengers.

"I’ve been flying to Melbourne for the past six years but this is my worst experience."

She said MAS should have called as her sister’s seat was confirmed. "My sister is having her exam (today), if she misses it, how does MAS plan to compensate?"

Yesterday, the New Straits Times reported that on-time departures had fallen below the airline’s record of above 80 per cent of flights.

Productivity fell as many employees were reportedly unhappy after the management carried out a performance appraisal using a system which they said they were only trying out.

They were also disappointed about their performance bonuses, share options and a recent one-off payment.

This year, he said manpower may be reduced by 700.

Sources at the KLIA claimed MAS employees were on a so-called "silent strike". Because of this, they said many international and domestic flights were delayed, including those to Perth, Melbourne, Auckland, Penang, Johor Baru and Kota Kinabalu.

Look! Everyone knows about it. Does Idris Jala have a "Zaki Zahid and Vincent Lim" on the staff insulating information from him? He needs to get his bony ass up and start doing a walk-a-bout to see himself the situation!

In a crisis situation, communication is an essential of crisis management. Why is Idris Jala's SGM "merepek" about spending RM200 million on ticketing system and a saving of RM70 million a year with grumpy customers having to queue and wait from the delays? Read NST Monday July 16th report below:

SEPANG, MON: Malaysia Airlines (MAS) is investing RM200 million within the next three years to upgrade its passenger services system, providing customer with the option of completing all booking, ticketing and check-in transactions from their home or office.

By September this year, the airline will be electronic ticketing (e-Ticketing)-capable, providing customers with the ease of printing their own tickets and option of making changes to their travel itinerary themselves, thus doing away with visits to the ticketing offices or travel agents.

“Check-in will also be easier as passengers will just have to show their e-ticket number as a form of identification. There will be no more problems associated with misplaced, damaged or forgotten tickets,” said MAS senior general manager, transition management, Dr Amin Khan.

Speaking at a media briefing here today, he said once the eTicketing process was completed, there will be a cost savings of RM20 per ticket with physical tickets no longer needed. This will translate into savings of up to RM70 million annually for the airline, he added.

About indication on the aerobridge story, it seems that MAS has issued a statement published on The Star Saturday July 14. 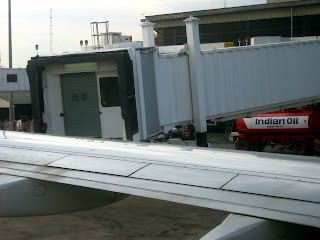 SEPANG: An unmanned aerobridge, which was docked to an aircraft, caused damage to the aircraft door when it suddenly shifted downwards at KLIA here on Tuesday.

A statement from Malaysia Airlines (MAS) said that no passengers were involved in the incident. The cause has yet to be ascertained.

“The aircraft for flight MH378 was scheduled to depart from Kuala Lumpur to Beijing, but no passengers were using the aerobridge during the incident,” it
said.

“All the passengers bound for the flight were then in the holding lounge and were transferred to another aircraft to depart for their destination at 10.40am,” read the statement.

With the aircraft door damaged, the earlier posted remark "a standby aerobridge should be readily available or passengers redirected for their boarding with the least time delay" is inaccurate. What begs an answer now is how could an aerobridge be unmanned? Was it moving on its own? Aerobridge are people operated and the last thing you'd want in your organisation are annoyed ground handling personnel.

The Butcher from Shell needs to understand the nature of airline industry. This is a highly regulated industry with a standard of no tolerance, and many check and double checks. The staff is constrained by the many and types of regulatory requirements set by many International bodies to abide to ALL aspect of its operations.

If a bus stalled in the middle of the highway, it could pullover and wait for help. Should a distillate plant not working well, production could be stopped and problem fixed, if technically possible. Aircraft can't pullover and stop engine at 20,000 feet.

The safety feature and extra precautions is beyond any other industries, such that it is safer flying than riding a bus. The exception would be Dato Chan Kong Choy's favourite Airline, where pinching penny from every nook is a priority and emergency landing three times a year at Kota Kinabalu is a typical day-to-day affair.

Such are the standard to be met that the work environment in an airline is highly stressful. Staff can be penalised for the slightest of mistake. The repair for the aerobridge bust up with the aircraft door could run into hundreds of thousand and staff DI-ed. As a result, the airline industry is highly unionised and this arised out of the need to protect workers.

With such a tense and pressured work life, the last thing MAS needs is to have a "Best Money Can Buy" Butcher as CEO that failed in turning around the operation, merely doing sacking and asset sales, and bias ESOS for himself and his team, before the whole thing crash and burn.

These staff have long memories when lied upon. They have been through a long journey, gave their support, and made much sacrifices, since Tan Sri Aziz Abdul Rahman left. Idris Jala should have emulated Tan Sri Mohd Nor Yusof's open approach to communicate by updating and regularly briefing the staff to get their support. Tan Sri Mohd Nor promised no retrenchment. And, they are aware of the crap involving AirAsia and their seconded novice parked into management position in MAS over the more conversant MAS Managers are affecting the whole organisation.

Without a trusting and motivated staff to support, Idris Jala will never achieve the turnaround in this highly unionised industry. That, Idris Jala can personally guarantee Pak Lah and not the 6 quarters of continuous profit. Perhaps, this is all PMS or actually is Pre-Meditated Sacking meant to merge with the financially constrained AirAsia.
at 7/16/2007 03:08:00 PM

yea...you got documents to support that?. What I heard from Idris himself. the asset sale profit was only a small proportion of the total revenue/profit..

As I know, he was a business mechanic. He turned loss making business in Shell into a cash cows. No sources for that comment again?