One Moment in Time


I celebrated my birthday early morning July 5th recently. By American standard time, that falls within July 4th, their Independence Day. Birthdays should be a joyous occasion but apart from the surprise birthday cake from a great group of bloggers, it was a subdude event for me. My political and philosophical view on my recent birthday is worth a rambling.
Despite the auspiciousness of my birthdate, I decide against putting up a posting on that date. Simply, because of my disdain with America despite it being the country that enlightened me with knowledge and sharpened my intellect and awareness of the world.
I am saddened to the fact that America has deviated violently from its great ideals as inscribed in its Declaration of Independence. It is a country that supress the independence of others. To celebrate their independence is sheer mockery, America is now the leading power recolonising the world.
America today force their will on every nation on earth, like the European colonials of fore. America lies to the hilt to justify their brutality and venture into the nations of the world it deemed necessary. It is not the America that fought a civil war to free the slaves, but it is out to enslave humanity for its self interest and paranoia.
America is out to hegemonise the world but hypocritically claimed it is made under the name of freedom. The disparity is noticably obvious from the assertion in their Declaration of Independence that political independence is a matter of natural law for the people based on reasonable, explicable, and explainable basis. They justify their independence based on the king's "repeated injuries and usurpations" of the Americans' rights and liberties and yet they are acting as "king" on foreign lands. 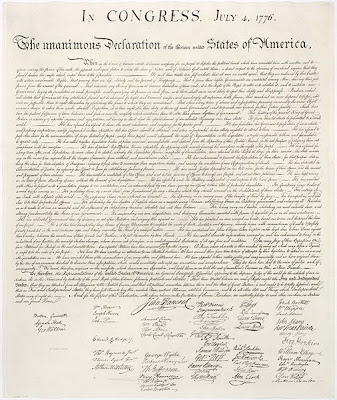 On a similar basis, Malays, the native inhabitant of Malaya went up to revolt against the proposed Malayan Union in 1946 which seek to impose the colonial free will on our political domain beyond their role as trustee administrator. 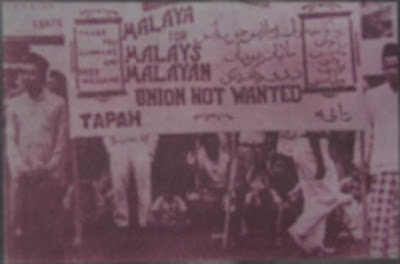 Subsequently, the momentum to revolt against Malayan Union gain further ground into a movement for independence. This year, on August 31st will be our 50th celebration of that momentous occassion at Stadium Merdeka in 1957. 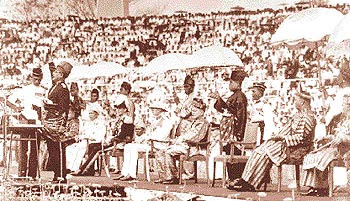 Although I have been talking about the celebration of independence and now touched on our very own independence, I am neither keen to talk of the struggle and intrigue towards achieving our independence, nor am I keen to see it from inconsistencies pervading our society and nation today.
However, I still wish to talk about that "one moment in time". It is about the need to have a sense of struggle with a value attached to it.

As one advancing further in the 40s, I have perhaps some level of time honoured wisdom to state my observation and opinion that there is a diminishing sense of struggle and purpose pervading the younger ladies and gentlemen of today.
Even amongst the mature and educated adults within my peers, I can't help notice and share that many are becoming more myopic in their perspective of events and narrowed in their scenario scanning. They could not observe beyond the tangibles, notably financial and immediate horizon to anticipate the forthcoming implications.
I could attempt to attribute it to the speed of change in the world today and its drive for expediency in deliverables. Perhaps, such velocity impedes ones ability to think in a broader and more comprehensive and structured manner.
However, I refuse to agree with that line of practical rationality. The distinction between men and animal lies in the mind and from there it generates norm and practices concurrent with value derived from principles of religion, or philosophy or environment.
These norms and practices are constantly evolving and developing over time and history into a set culture. Whether static within the short perspective of time, or vary over longer period of times, culture provides a set of value system and practices that should perservere the test of time and surroundings. Culture is synonymous with morality or acceptable norms and practices.
If we continue to sustain our accepted value and morality as the accepted norm and practices, we will always remain guided, and our past and present is seamless and of a continuous consistency.
As I relate that back to our independence, it could be regressive that we severe the continuity from the value of our past struggle for new thoughts and paradigm that is not a natural evolution but reactive. What we believed and revolted when our stomach are hungry should also be the belief and struggle we adhere to with a full stomach. Let us not lose sight and weakened with properity.
Inevitably, life is a full circle and history tend to repeat itself. It is those that dare to defy is the cause celebre. It is a celebration to adhere to their value-laden struggle and value to refuse unwarranted discountinuity. Perhaps, the celebration of freedom and independence is only relevent if one has defiantly refuse to compromise ones struggle and value.
at 7/09/2007 11:23:00 AM

Happy Birthday Bro'... Ha-ha.. Reminded me of Oliver Stone's classic "BORN ON THE FOURTH OF JULY"...

Agree.. on the values and ideals of "independence" has waned considerably... Apa nak jadi?

But you will agree that it gets very difficult to fight a revolution on a full stomach... which is why you get very apathetic would be revolutionaries in places like Singapore?

Happy birthday bro! Mine was the day before yours i.e. exactly on the 4th of July. But I have no affinity nor do I despise America. I'm just apathetic (which is probably worse).