Negara Islam Uproar: Much Ado Over Nothing! 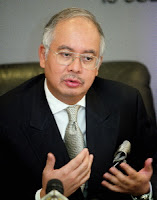 The current uproar led by the DAP over Dato Seri Najib’s remark on Islamic State is but another of DAP’s attempt to agitate and create discontent by the non-Muslim for political capital. The non-Muslims, on and off the blogosphere, demonstrate their unity on this issue.
The biggest surprise is MCA's bold stance to lay claim Malaysia is historically a secular state and is in a war of words with Pemuda UMNO. Thats in concurrent to DAP and Gerakan's stand. PKR is just for Anwar Ibrahim.

The line is not clearly drawn between Malays/Muslim against non Muslims. There will be the usual voices of fringe Muslims of Malik Imtiaz, Harris Ibrahim, Sister in Islam and their likes fighting for their secularism cause and anarchic liberal Islam view. Anwar Ibrahim, the 70s voice for “rising tide of Islam”, takes a personal potshot at Najib to call him “jahil” but adds nothing to voice any dissension.

All these noises are much ado over nothing!

In a press conference last Tuesday July 17th, 2007 after delivering the Prime Minister’s speech on his behalf at the International Conference on the Role of Islamic States in a Globalised World, Dato Seri Najib corrected an allegation by one member of the press that Malaysia is going the secular nation way. This is the source of much uproar.

What did Najib actually said?

IS DAP interpreting “Negara Islam” as “Islamic State”? Could it also mean “Islamic Nation”? What is “takrifnya tersendiri” or its own interpretations?

Najib point of view as reported by both sources is that Malaysia has never held to secularism but guided by Islamic fundamentals for Islam is the official religion of the federation. Correctly, he pointed out that Malaysia respect the rights of the non Muslims. He added that “Malaysia does not want to be stereotyped with the Western definitions of a secular and a non-secular state.”

Using the convenient reference of Wikipedia here, a secular state is described as “a state or country that is officially neutral in matters of religion, neither supporting nor opposing any particular religious beliefs or practices, and most often has no state religion or equivalent. A secular state also treats all its citizens equally regardless of religion, and does not give preferential treatment for a citizen from a particular religion over other religions.”

By that simple definition, let’s now refer to the Constitution of Malaysia, the “holy book” for those secularists but claim as Muslim. Often heard, these Muslims are not interested in historical evidences, political (partisan or not) considerations, and societal resolutions (see how my posting "Key To The Highway: Interfaith Issue ... Gimme A Break!" for society resolution got skewed, heated and diverted away by combative commentators).

They and their conspirators only say, only the law matters and the Constitution as supreme words in this land!

Islam in the Constitution 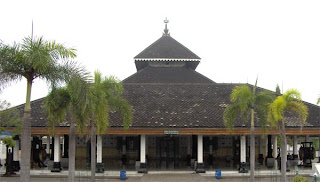 The Masjid Agung Demak in Central Java, believed to be built by the Wali Songo brotherhood in 16th Century Demak Sultanate 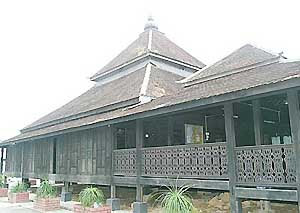 Masjid Kampung Laut of Nilam Puri but originally located at Tumpat, Kelantan and built by a group of missionaries in 1730 in the tradition of the Masjid Agung Demak

Fine, lets see what their “holy book” or Malaysian Constitution has to say.

Secondly, although article 11(1) states that every citizen has a right to profess and practise the religion of their choice, but it comes with the exception of Article 11(4). That article forbids the preaching of other religion to Muslims.

Thirdly, Islam is the only religion with the legal and administrative system in this country, acknowledged by the constitutions. The recent Lina Joy case demonstrate the power of the syariah court on matters of Islam, which include entering and leaving Islam and the legality in the relevant documents issued by the various Majlis Agama Islam and Jabatan Agama Islam. Sadly, Siti Fatimah @ Revathi may lose and suffer on legal and documentation grounds. Her only option is to resort to the “kurang ajar” route to challenge the Constitution.

In summary, Malaysia has a parallel legal system of the civil and syariah courts with its own set of jurisdiction as stated in the "holy" Constitution. Article 11(3) provides for all religion to administer their own affair and so does Islam.

Fourth, article 12(2) of the Constitution allows for government to allocate spending or provide subsidy for expenses on Islamic administration, Islamic institutions, and teaching of Islam. With this respect, the Government is not obliged to allocate any budget to other religion as it is not provided in the Constitution.

With all these provisions, are we then a secular state with the separation of state and religion in accordance with the philosophy of secularism? If they still insist so, then explain why the existense of such clauses? These clauses has been around since independence. The treaties between Raja-Raja Melayu and British has provide these provisions and acknowledge in Reid's Commission. Their forefathers accept it with their eyes wide open. 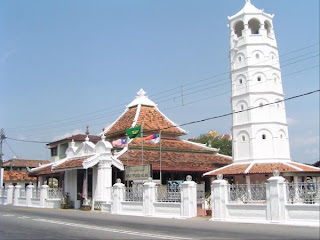 Masjid Tengkera, Melaka's oldest surviving masjid and built in 1728
Clearly, the Constitution clearly expressed the more elevated position of Islam over the other religion. Thats the simple understanding as the basics.

For the more twist and turn of the interpretaions, lets leave it to qualified and practising lawyers, possibly those from respectable academic credentials, to argue it. Respect the judges' decisions for they have the final say. Thats the legal adverserial route that I do not advocate, for I am for dialogue within society and amongst "men" of cloth.

Whether Malaysia is an Islamic State or Nation, it will be subject to lengthy constitutional and theological debate.

Tun Dr Mahathir, in 2001, already claimed Malaysia is a Negara Islam and he was leaning to Islamic State. Mahaguru58 here takes a puritanical stand that Malaysia is yet to truly qualify as an Islamic Nation. ABIM President Yusri Mohammed, as reported on Malaysiakini July 21st, 2007, takes the position that “Notwithstanding the constitutional and theoretical debates, Malaysia has been an Islamic state in practice ever since Independence.” Jeff Ooi has regenerated some old newspaper cutting of Tunku ABdul Rahman and Hussein Onn here.

On MCA’s claim that there is historical evidence that Malaysia is a secular state, let’s ask them where do they want to start? 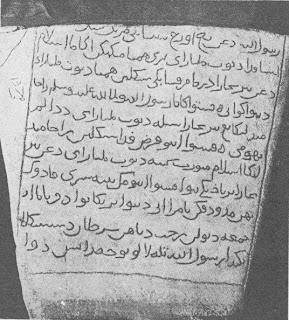 Batu Bersurat Terengganu proves the existence of Islam before 1326/1386
British first intrusion into Malaya via 1874 Pangkor Treaty? The days of the Melaka Empire? Period of Terengganu's Batu Bersurat in the 14th Century? Why not stretch it to 1136 Kingdom of Merong Mahawangsa , the descendent of today's Kedah Sultanate? Do not forget the Reid and Cobbold Commissions. Why not throw in the wrongly applied used of term of Jean-Jacque Rousseau’s Social Contract in the debate?

Was there Syariah court and Hukum Syarak practised in Malaysia or Malaya or Melaka Empire or any preceding Malay Kingdoms? Where is the position of Islam legally?

Off course, MCA's stand has political dimension, just like the reaction of DAP, PKR, Gerakan and MCA. Perhaps, Najib too. And, general election is around the corner. That could explain for the damage control here and here. Let’s leave it at that. But why is UMNO not defending Najib with facts and reasons?

Give up the fight...as you said, over nothing. THIS looks very real and foreboding....Malaysia is slowly but surely going down the highway to islamic THEOCRACY, and there'll be no shortage of MULLAHS, that's for sure.

Each HM SPB YDP Agong and HRH Malay Rulers when assumed office, they swore their oath of office and secrecy to the Al Quran. So does the Governors of the States and judges.

The Mufti is officially a very senior advisor on Islam to each of the HRH Malay Rulers. Secular State do not have an official state position of a Mufti.

A lot of Islamic values have been adopted and implemented in the Civil Service and everyday lives of Malaysians.

The name Allah and Muhammad is embedded in the insignia of the Malaysian Armed Forces and Royal Malaysian Police.

Al Quran is also a part of the regalia of HM SPB YDP Agong, HRH Malay Rulers and both Dewan Rakyat and Dewan Negara.

There are so much ties about Islam into the formal and official practices within the Malaysian Government and Malaysia as a State. A Secular State is where religion is wholesomely detached from the State and its everyday official and formal Govt operations.

Nasruddin opened a booth with a sign above it: “Two Questions On Any Subject Answered For Only 100 Silver Coins.” A man who had two very urgent questions handed over his money, saying: “A hundred silver coins is rather expensive for two questions, isn’t it?”

“Yes, said Nasruddin, and the next question, please?” (Ref)

Just would like to emphasise the phrase "islam as the official religion" (similar emphasis on Bahasa Malaysia, Kebudayaan Nasional..etc).

When Islam is acknowledged as the OFFICIAL religion, than other religions ( similarly other languages,cultures,etc) must take the place of less official or second place. There must be no conflict or actions that would undermine the OFFICIAL position, whether in government administration or social and religious activities of the country.

How convenient for you to stop your history at batu bersurat. What about Malaysia's hindu past? Have you forgotten about that? The rajas, keris, adats are all hindu based.

Everyone has got a different definition of what is an Islamic state.

But this is a fact: The word Islamic state is not written anywhere in the consitution which defines what Malaysia is. In fact, Malaysia is not even a state but it is a federation which includes the non-Muslim states of Sarawak and Sabah.

What’s happening now is that certain groups of Muslims for political reasons want to declare Malaysia an Islamic state so that they can push their agenda.

Questions:
But just like Muslims point out that there are provisions for public funding for Islamic activity, there is also immorality, corruption, gambling, liquor, pork etc freely available in Malaysia. There are also 9-10 kings and an agung, a tradition held over from Malaysia’s Hindu past. Can Malaysia be considered an Islamic state if these are present? Furthermore, there is that little problem of the Constitution being the supreme law of the land, not the syariah. What kind of Islamic state is syariah not the supreme law of the land?

And furthermore, has anyone considered the views of the Christian natives in Sabah and Sarawak and how would they feel about all this Malay Muslim chavanism?

My personal view is this: In 1957, Malaysia was designed to be a secular country but with special provisions made for Islam. It is neither fully secular nor is it fully Islamic. It’s somewhere in between.

I found this on the comments section of my website early in the morning ...

I found this on the comments section of my website later in the noon ...

Citizens In Solidarity with Raja Petra and Freedom of Speech !

Please publicise for us !!!

Malaysia is a kafir state based on the following rationales :

1. Article 43 of the Federal Constitution stipulates that Malaysia implements and enforces man-made laws;

3. Article 161 stipulates that judgement is by man-made laws;

4. Article 4 stipulates that the Malaysian Constituion is the supreme law of the land and hence making the Quranic law subsevient to it.

These articles reject the article of faith of believe in Allah and thus making Malaysia a kafir state.

The article of faith of believe in Allah stipulates among others, that :

1. Only Allah's laws should be implemented and enforced on mankind;

2. Legislation is the sole prerogative of Allah;

4. Allah's laws are supreme over others.

These arguements are crystal clear and in black and white from the Quran - there should be no further dispute whatsoever on this issue. Article 3 of the Federal Constitution which states that Islam is the religion of the state is of no consequence to the creed of Islam at all and in whatever way!

Whosoever insists on declaring that Malaysia is an Islamic state, ia a kafir!