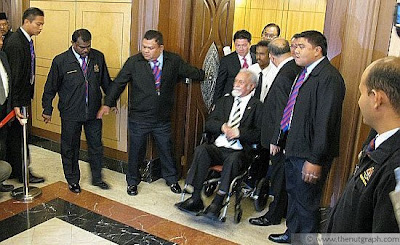 Karpal being wheeled out of the Dewan Rakyat chamber after being ejected by the speaker
By Deborah Loh, The Nutgraph

KUALA LUMPUR, 2 July 2009: Pakatan Rakyat (PR) parliamentarians staged a walkout in support of Karpal Singh who was ejected from the Dewan Rakyat today following an exchange of words with Umno Member of Parliament (MP) Khairy Jamaluddin.

Karpal, the DAP chairperson, and Khairy, who is Umno Youth chief, locked horns over the fracas with four Selangor Umno Youth leaders who on 26 Feb 2009 harassed and obstructed Karpal from entering Parliament.

Karpal, the MP for Bukit Gelugor, was told to leave the house by Speaker Tan Sri Pandikar Amin Mulia after he retorted that Khairy was "unworthy" of accusing him because Khairy was "a person guilty of corruption".

Plenty of name-calling was exchanged between the PR and Barisan Nasional (BN) MPs as they debated a motion to adopt the punishments recommended by a select parliamentary committee set up to probe the February incident.

The committee had also called for eight PR MPs to be admonished by the speaker for refusing to attend the inquiry either as witnesses or as committee members. They are Karpal himself, Fong Po Kuan, Lim Lip Eng, N Gobalakrishnan, Fong Kui Lun, Lim Kit Siang, Datuk Kamarudin Jaffar, and R Sivarasa.

The motion was passed by BN MPs after Lim (Ipoh Timur-DAP) led the remaining PR legislators out of the House when Karpal left.

Karpal stood his ground for a while after Pandikar ordered him out, demanding higher fines and stiffer punishment for the Umno Youth leaders, including arrests and court action.

Fong (Batu Gajah-DAP) said Pandikar should not chair the session to debate the motion due to a conflict of interest, as he had also chaired the select committee that investigated the incident.

Datuk Razali Ibrahim Khairy (Rembau-BN) tried to rebut Karpal by saying that the Umno Youth leaders had already apologised to Parliament for their actions.

Khairy added that none of them had touched Karpal's body and that the four had only wanted Karpal to account for his allegation that Umno Youth had sent him live bullets and for his use of the word "celaka" on the youth wing. Karpal had made this accusation in the Dewan Rakyat on 25 Feb.

In the Parliament lobby, Khairy told reporters after the motion was passed that Karpal was "a big fat liar" who "did not dare" to repeat his allegation about the live bullets outside of the House.

"He knows that he can say it inside the Dewan because of parliamentary immunity. I have challenged him to repeat it outside but he will not.

"He is the root cause of why the incident happened, his lack of respect for Parliament, for the rulers, for Pemuda Umno, and his tendency to keep on lying. Today is proof that he is an MP who lies through his teeth," Khairy said.

Khairy said the payment of the RM1,000 fine and the Youth leaders' apology to Parliament showed that they had taken responsibility for their actions, whereas no action was taken against Karpal for his "foul mouth".

"We should have more strenuous punishment for MPs who flout rules and who disrespect the House. He should apologise to us as what he said was unprovoked," said Khairy.

Karpal told reporters earlier after leaving the Dewan Rakyat that the four Youth leaders should have come inside the House to make their apology.
at 7/03/2009 11:30:00 AM

Perhaps the Income Tax should find out how Sil became 'the richest unemployed/unemployable' MP in M'sia.

And about that friendly 'loan' to buy shares in ECM Libra and then claimed he sold his shares at a 'loss'.

i have more interest about the single picture u got there. whats with this guy wearing a spectacle?

is it for him to look .... educated or something? his father in law tried before, and he got burned short after his second term.

maybe i sound too sceptical on him. maybe he got vision problems sometime. after all hes only a middle age man with ambition. apa2 pun there must be a reason.

he got one leeway ja that is karpal's misuse of parlimentary immunity. what the OKU said about KJ is spot on. sapa nak jawap? apa nak jawap?

let those 300 plus dogs answer la.

as usual even if khairy corrupted to the bones, they will always be UMNO people who will protect him. Why? He got something that other did not or he has also bought the whole dewan rakyat?

Isnt Donplaypuks the Indian pengecut who keeps on attacking UMNO and dare not confront the DAP?
Aah well, the IRB does not take orders for pengecut.

Parliament was very rite in kicking out Karpal Singh for this unparlimentary behaviour. KJ was defending Pergerakkan Pemuda UMNO - a noble initiative. I hope we are all on the same page on this...?

UMNO disclipniray committe did, all Karpal did was just repeat their findings.

Unless you are one of these birds who thinks money politics is NOT = corruption.

BRO PUKS, I DO AGREE WITH YOU ON THIS, YET HE IS STILL UNTOUCHABLE, I WONDER WHY? HMMMMM...

Forgive my unker Karpal - age is sucking the good in him, which is not much though.

Karpal once did that to Anwar, telling everyone in the parliament that one top UMNO leader had a rather strange sexual preference.

But Karpal and Anwar are now buddies. I guess this will soon happen to Khairy as the son-in-law is now slowly fading.

Karpal-Khairy partnership..scary! even the hell can't unleash the suitable match.

Hang hentam Parpu sampai tak ingat dunia lepas tu hang mula speaks nicely to get him joining your muzakarrah. Your trick is so cheap la Wenger, but it sounds rather syok sendiri je.

Ouccch!!! I guess nobody answers to your call.

Wenger, you are a joke.

What has being Indian or Chinese or Malay got to do with anything?

Corruption is coruption! Ask Sil to explain his wealth. The UMNO disciplinary council ruled that he was guilty (as they did about Ali Rustam who is still MB. Only in M'sia. M'sia Bolh!!). So, what and who is Pergerakan Pemuda UMNO defending? Corruption?

And if others disagree with you, they must be pengecut?

You do not know that I am one of Parpukari's big critics? So, if he agrees with me on something, it's not because there is a bloggers' code.

Blazing comets with power grabbing agenda must be viewed with great suspicion indeed!!

Oucchhhh!!!!! kena lagi Wenger, but frankly you're really a joker.

Parpukari, lagi komen Bro DonPlayPuks di blog Sakmongkol.
donplaypuks® said...
"PETRONAS has only one shareholder. It must listen to the shareholder which is the PM who represents the country."

Surely that's not correct. The only shareholder is the Nation whose rep is the PM.

My view of the current situation?

Watch heads roll? There's been too cosy an arrangement at Petronas which behaves as though it is a foreign Government and the Chairman/CEO is invincible, untouchable and a kind of demi-God. You defy the ultimate CEO at your own peril.(Remember when Truman sacked the hero MrArthur?).

We can see that many of the ills beseiging our nation have their roots in TDM's 22 years overstay at the helm of the country.

And if we are not careful, that same disease will afflict Petronas. We will end up truly killing the golden goose!

But that still does not mean I endorse Omar Ong being forced upon Petronas. In this instance, Najib has no business pushing this discredited appointment through.

This one is about Karpal and KJ.
It has nothing to do with Petronas and Tun M.

Anyway, my advice to YB Karpal, please pick somebody your own size.