LKS concede no precedence for RCI to investigate death

Purely putting up rhetorical argument, Lim failed to put a stronger justification against Public Inquest in which a Coroner's inquest is set for July 29th, 2009.

Lim: No precedence for Royal Commission but it has been done 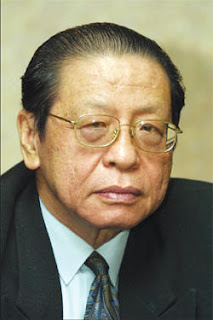 DAP adviser Lim Kit Siang conceded yesterday that there is no precedence of a Royal Commission of Inquiry (RCI) in Malaysia investigating the cause of a death.

“But it’s been done in other Commonwealth countries,” he told Malay Mail.

On Friday, Attorney-General Tan Sri Abdul Gani Patail said it was only proper for a court of law to deal with Teoh Beng Hock’s cause of death. Which was why, Gani said, the government ordered an inquest to establish the cause of Teoh’s death.

RCI should not be reduced to undertaking the operational police for it will only result operational chaos and justice is not served. It should be meant for significant issues.

By RCI used to investigate Teoh Beng Hock's case, it further lowered it's siginificant into a political battlefield. As it is, there is a section of the public also demanding an RCI for the death of a University student that was left unattended.
at 7/27/2009 08:45:00 PM

Bro Voicey, heard thrs anothr conspiracy goin on silently in d chinkies & indies community to team up silently due to deir fear of d UMNO & PAS teaming up in d future.. initiated by d kongsis?? dats wat d whisperer were whispering,..heheh,..wat else can I say,..(,")

LKS is a tired old dog, memang orang tak buat RCI just to look into one death, it isusually set up to look at process or systems...