MARBC: More in common than differences 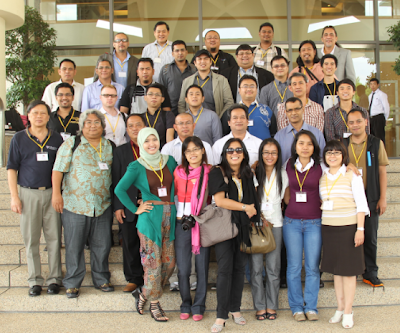 After returning from Sarawak election the Monday before and while still recuperating to write a comment of the concluded Sarawak Election, it was time to be back in the heat of things to help organise the 1MARBC.

The two days conference was just concluded on Sunday night and it's time to be back to my usual blogging.

Kudos to the real organisers of the event; Tony Yew, Syed Akbar, Rocky, Bigdog and others I may not know off. The rest of us were just lending a hand and pitching in here and there.

As a member involved in organising the event, I am obliged to write something about the event. But it is quite hard for me because since the early days of the blogging explosion, I haven't been writing much on the subject of blogging for quite sometime.

Kind of grown shy or "segan" for a blogger to write about blogging. It is more appropriate for others able to see it from afar to give their view. Nanti orang kata perasan dan syok sendiri pulak.

Maybe this will be an exception.

It is also an exception on my part to report on events because I have avoided the chase to be newsbreaker and news commentator.

For me, the content of MARBC on blogging whether spoken in the speeches or discussed in the workshops are really nothing new and kind of repetitive with many other earlier discussions attended.

However, the one singular thing I find refreshing in this meet-up was the opportunity to meet, socialise and share experience with the other bloggers in the region.

In this event, not only were Asean bloggers were invited but some bloggers from Sabah and Sarawak to give us a truly Malaysian flavor. Naturally with most of us just returned from Sarawak, there were more Sarawak bloggers than Sabaha bloggers.

Off course, we can't avoid the subject of blogging at a bloggers meet-up like MARBC since that was the common factor that jell us all together. However what I realised was that there is more commonality between us bloggers, where ever we come from.

On the day, the Asean bloggers came to register at our secretariat on Friday evening, my first remark was ,"Hey you guys dressed with shirts tucked out like me and with a laptop on my back."

The Philipines blogger in the secretariat, "That is just your first impression. There is likely to be more common things between us bloggers."

By the next day, the commonality becomes more apparent as each of country described their blogging experience.

Off course, it is not exactly the same. Different Government have different level of tolerance to political activism, freedom of speech and the manner intervention and censorship is applied.

Most of us from Semenanjung were socio-political bloggers. It is no surprise that countries like Cambodia, Thailand, Brunei and Vietnam clamp down on certain "sensitive" postings.

But to be told, Indonesia does not have socio-political blogs was a surprise. It seems there are several dedicated website for socio-political community. No blogs on politics.

Each of the country had interesting experiances to share and for others to copy from.

I must say I am impress with the Indonesian ability to gather 1,500 bloggers for their Pesta Bloggers. As told by the organiser, Ollet and Ong, apart from the social aspect of the event, it is an annual affair to do match-up between business/investors and bloggers.

There were two American born Vietnamese that represented Vietnam. Before anyone get sceptical of their roots, the two young men are sons of boat people that fled the country and now the boys returned after graduation to do social work in their motherland.

We could only get hold of the English blogs of Asean countries. That explains for a Canadian living in Thailand representing Thai bloggers.

There was an Indian young man whose involvement in Wikipedia really impressed us. He gave some ideas on that should be done in these region.

When the cloggers or Cambodian sister-bloggers and the Canadian talked of the censorship or abuse of certain law to deny freedom, it was something we could appreciate and emphatise.

Najib's advise to the cloggers when they raised it in the Q&A session with him was to continue to struggle through for truth will prevail itself.

There was that air of brotherhood or sisterhood irrespective if they were blogging about food, travel or politics.

It doesn't take us long in the first workshop on Saturday to agree and come up with a consensus or declaration or resolution, whatever you may like to call it.

Basically, all of us wanted to work, network and agree together on some basic platform. We all know that more will come out of this and that the spirit Asean is pretty much alive at the people to people level.

It was only appropriate that the first two points were about:

1. The establishment of an Asean social media and blogging network to promote understanding, good relations, unity and cooperation for regional betterment and progress of the new media practitioners in the spirit of mutual respect;

2. To assist in achieving and promoting the common values and aspirations of goodwill and to promote greater understanding and familiarity of the social media;

Our second and third points below expressed not only that common aspiration of the Asean bloggers but it went well also with other participants on the next day when only one blogger put his hand up to agree with Internet censorship.

3. To promote the freedom of expression, freedom of information and freedom from persecution;

4. To promote ethical and responsible blogging through positive engagement;

5. To meet regularly and promote the growth and progress of social media in Asean

Interestingly, the Phillipines delegate raised something really pertinent and in-sync with my own thoughts that is second nature to Internet communities.

They are not comfortable with any form of attempt to form rigid organisational structure or any particular body to claim representatives of blogger.

That would mean the Kuala Lumpur Resolution is not something to be imposed on others and obliged upon on member countries to adopt but a resolution for each individuals to ponder, deliberate and consider.

The Kuala Lumpur Resolution made me reflect back on current happening on the Malaysian blogophere, specifically amongst the socio-political blogging and social media.

It has taken a sad turn over the last few years to become too partisan and padded with partisan agenda that the political divide seemed impossible to bridge (unlike the heydays of blogging to knock-off Tun Abdullah).

What happened to the much said words in those day to agree to disagree?

Just because they are on a political objective to conquer grounds from BN, does it mean they can't eat, drink and share a few laughs with those of differing political affiliations.

Tun Dr Mahathir attended the BUM 2009 and the "usual suspects" stayed away. By 2010, when BUM organisers attempt to have a more neutral discussion, the partisanship grew more obvious.

In one session where Zulkifli Nordin was heard to participate on the issue of Allah, every other person - politicians to activist - wanted a crack at him.

Someone in the committee or sponsor changed it from a balanced set-up to a three against one lop-sided session in favour of the Christian use of the word Allah. They think we do not notice and buy into such cheap excuses. Don't think we are too dumb not to be able to counter such cheap trick.

Such is the situation in the blogophere since these overzealous and intellectually insecure and immature dimwits start to learn of partisan affiliation. They begin to sneek only their own agenda as though the opposing views does not matter.

It as though they are the only citizen against divisiveness in society, corruption and misuse of power, curbing of freedom and human rights, concern with building a united nation, etc.

The MARBC gathering dedicated to blogging, seeking commonality and having a positive attitude of moving forward - without the presence of loud Sunday morning TV evangelist in the likes of Harris Ibrahim, sneeky self interest of Dr Lim Teck Ghee's agenda, and overzealous presence of Pakatan politicians - is indeed refreshing.

It is time we stop allowing politicians (both side of the divide) steal the bloggers meet with their convoluted spinning and hypocrasies.

Politicians should be held from the rostrum and stage at bloggers meet and be made into audience. It is time they hear and learn from the voices of bloggers aka rakyat.

For one, the rakyat are sick with excessive politicking. Fed-up, meluat and menyampah. They are supposed to administer and manage the state and country to make it better and not spending time with endless blame game.

At MARBC, we talked of blogging as something to bridge people to people in this country and region only divided by seas and straits.

Yes, we spoke of the "boring" subject of blogging (exclusively to me) but that boring subject will hopefully unite the people of Aseans despite the seas and straits that divide it.

Taking a page from MARBC, the Malaysian SOPO bloggers should realise that there is more to life and blogging, than socio-politics and their party affiliation.

Disagreement on certain viewpoints or political philosophies should not make someone into permanent enemies.

There is more in common than differences between bloggers than you can think off. It is a matter of your maturity.

Now back to the groove of things.

My tribute and thanks to your good self.
http://ffrreeddiiee.blogspot.com/2011/04/simply-best.html
Ribuan terima kasih.

Shahrir chides blogger over ‘sin city’ JB
thestar.com.my
JOHOR BARU: A poem on the Net that derided Johor Baru as a “sin city” has ruffled the feathers of its MP Datuk Shahrir Samad and the state government.

You must be honoured.