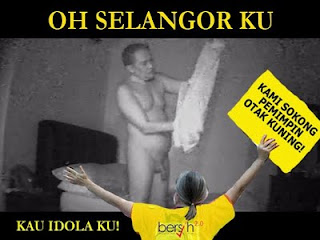 One of Bersih's 8 demand was to stop dirty politics. This demand was one of those new demand inserted into Bersih 2.0 for Election Commission to work on.

Before that, Bersih had a list of 17 demands when they held discussion with Election Commission's Chairman, Tan Sri Abdul Aziz Mohd Yusof on November 9th, 2010. There was supposed to be another meeting after the streak of by-elections and Sarawak state election ended but they suddenly said no go.

The interesting part was that the list of 17 demands had been pared down to 5 demands. Bersih included 3 new demands which include to seek stop dirty politics.

Before going any further, let's ask: Who is empowered to stop dirty politics? Actually certain act can be addressed by police, EC, court lawsuit, etc, but the honest answer is: No one.

It is thus ridiculous on Bersih to seek on the Seri Paduka Baginda Yang Di Pertuan Agong or EC or any other authorities to stop Barisan Nasional, or Pakatan Rakyat or Independent and Konsensus Bebas from playing dirty politics except the politicians themselves.

Ah .. we forgot. Bersih is not partisan politics. Hehehe ...Why did Bersih drag the people to take it to the street on that last-minute-included demand? Reason is known but forgotten by many, thus allowing them to mislead and divert the mass attention.

Before going any further, let's not try to bullshit about Bersih being bipartisan or independent, just like Malaysian Civil Liberties Movement (MCLM) is not pro-Pakatan Rakyat. It is a vehicle of Anwar Ibrahim and Pakatan Rakyat working in concert with funders and enablers from the west. There is no argument to say otherwise. 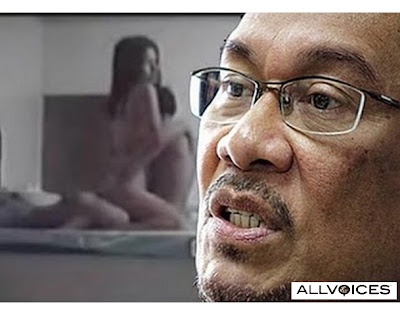 Let's recall that on March 21st, 2011, the local media was alerted to invitation by the trio Dato T - led by Dato Eskay Shazaly Abdullah, with Tan Sri Rahim Tamby Chik and Dato Shuib Lazim - to a private screening at Carcosa Seri Negara of a video of Anwar Ibrahim allegedy in a sexual romp with a China Doll prostitue.

That brought Anwar into a frantic denial. He was seen in a rage when asked by reporters on two occasion when asked about an Omega watch believed to be a specially custom made gift from a Middle East ruler.

It was followed by a political drama of denial, police reports, allegations and diversion. The diversions were an attempt to kill him or his wife by mending with his car brakes and death threat on daughter Nurul Izzah. 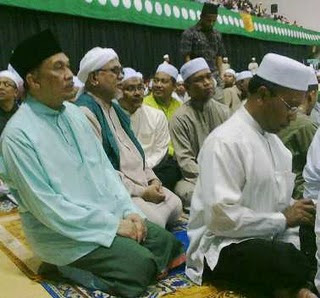 Apart from the usual ceramah circuit around the country, to include the Sarawak state election, Anwar seeked help from PAS to hold a massive solat hajat event at Melawati Stadium. 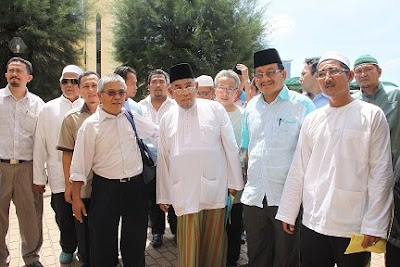 On Mac 26th, a meeting claimed to comprise of 60 NGOs and led by teras's perennial Chairman, Cikgu Azmi was held at one Madrasah in Gombak to discuss a so-called political crisis beseiging the rakyat but it is actually only about another Anwar's sexual misconduct.

The meeting establish a coalition of NGO that called themselves Saf Anti Fitnah (SAF). 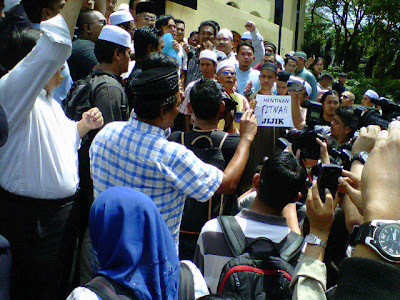 SAF held demosntrations such as the one in front of Masjid Negara after one Friday prayers. 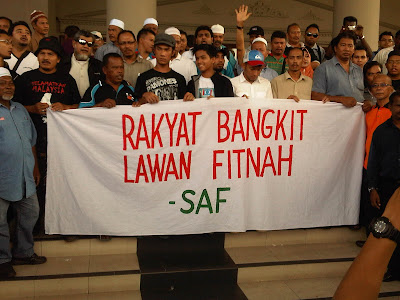 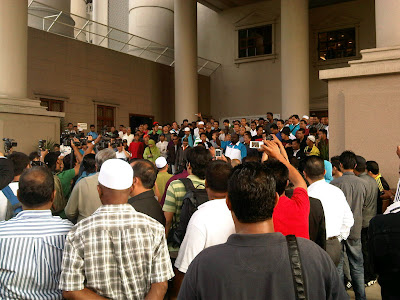 They had demonstration on one of Anwar's day in court. 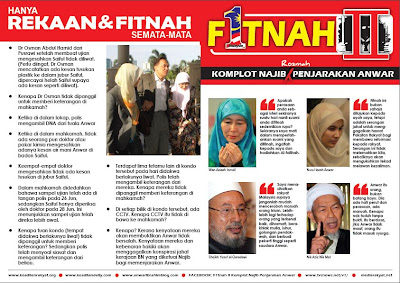 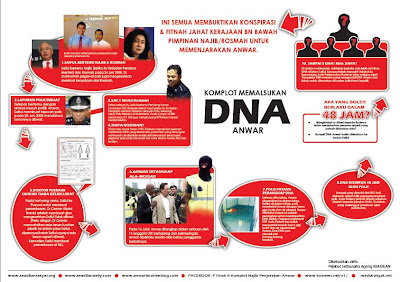 SAF also produced brochures to explain and claim that the court had fabricated evidences and as usual there was a conspiracy to imprisoned Awnar and deny him of Prime Ministership.

By early May, SAF launched the Kempen Anti Fitnah II and demanded on Jabatan Agama Islam Wilayah Persekutuan (JAWI) to implement the syariah law related to teh crime of qazaf under Seksyen 41 of the Jenayah Syariah Crimes Act, 1997 for Federal Territory.

Utusan Malaysia columnist, Zulkifli Jalil described the khutbah as the masjid was used to clean up the name of Anwar Ibrahim.

At around that time, Deputy Inspector General of Police, Dato Khalid told the press that the police had sent the video to US and South Korea and the study proves the video as genuine and not tampered but stopped short of saying who the sexual perpatrator.

By June 24th, 2011, the Dato Trio admitted guilty in court for the offense of screening or distributing pornographic materials.

They could have challenged it on the ground that it was a private viewing, by invitation and at an exclusive hotel but they chose to admit guilty, pay the fine and be over with.

However, they manged to sneek into the court proceeding their finding by a facial identification expert from Ivy League, Dartmouth College. The expert finding places a 99% probability (resemblance) that the sexual perpetrator was Anwar Ibrahim.

Voila ... by end of June when the Bersih illegal assembly was hot in the news, there was the demand to stop dirty politics.

Any idiot can spot that it was an Anwar Ibrahim agenda and Bersih was championing it to cover for his personal sexual weakness. It was no coincidence.

Most political observers would honestly admit that Barisan Nasional leaders is no angel when it comes to sexual indiscretion, but all of them quit from their post. Why is Anwar still adamant to remain in pursuit for a Prime Ministership?

BN is also no angel when it comes to own dirty politics. But not in the extensive manner used by Pakatan Rakyat and no hold barred that include accusing on Prime Minister's wife for murder based on mere hearsay and yet demand on authority to investigate.

If she is found innocent from Raja Petra's demand for investigation, anyone can win teh bet to guess Pakatan will accuse the investigation of a cover-up.

More so, with a rather limited capacity UMNO Information Chief and deviously calculative Minister of Information.

The most dangerous of Pakatan politics is that their practise to instigate hatred, lies, and deceit towards the national leadership, public institutions, and the nation (see video against police by Bersih) is lead to the detriment of sound governance, economic health and security of the nation.

Does Bersih want that dirty politics to stop?

Or they prefer it to go on under the name of so-called democrasy and human rights so that it helps their agenda to bring down the Barisan Nasional Government at any cost including colluding with foreign covert operation?

The connection is obvious.

Zaid Kamaruddin, who played a leading role in Bersih 2.0, and President of Jemaah Islam Malaysia (JIM) had JIM be part of Saf Anti Fitnah.

Quote: "Most political observers would honestly admit that Barisan Nasional leaders is no angel when it comes to sexual indiscretion, but all of them quit from their post."

The word use by the expert is 'resemble' not 99%

anon 3.23pm,buta tak nampak gajah depan mata?gajah mana tu?belalai gajah mr.y ada nampak? anon 4.01pm,the words uttered by datuk shafee abdullah were,experts concluded that the man in the video was 99.9% resembling mr.x,who is anwar ibrahim.as a voter i am waiting for this finding to be challenged in the court of law not in the court of public opinion.

This ariticle is one sided and full of lies!

after visiting the link above and make sure you watch it till the end then pls ask yourself... why kind of human Datuk T is. tq!

Anwar is famous for sueing anybody who try to defame him.

why he's not sueing the trio over the china doll video keep churning in my mind...

Does the video, the press conference, the video viewing session is not strong enough for him to sue them.

And 90% friends of mine who are fence sitter said that the man in the video do resemble Anwar, without any doubt.

The only argument came out from them is why didnt he sue the trio until today.

Ambiga can help anwar to open up the case.

Anwar did not sue Saiful too !

By saying "buta ke? Gajah didepan tak nampak ke", does that help others to understand your point of view.

Its not necessary to tell me about what is already known.

I can tell you more behind the scene story.

OK fine, you see it as one sided and full of lies.

Dont just instruct as to read whatever your link you give us. I do not read just any blog. I need to know who I am reading.

How about explaning your view in your own words. That way we benefit from a lively discussion.