When things go wrong I seem to be bad
But I'm just a soul whose intentions are good
Oh Lord, please don't let me be misunderstood

The social media is abuzz with talks that few Ministers will be dropped, recently won MP, Dato Mah Siew Keong of Telok Intan and Dato Liow of MCA will be appointed Ministers with some shuffling of an MIC Deputy Minister.

No ... we are most uninterested to predict and suggest names for an impending cabinet reshuffle. As far as we are concerned, Dato Najib should have placed his men and women when he assumed Prime Ministership and bleached both the cabinet and election candidate list.

Thus, we are not writing to demand for Dato Hasan Malek to be dropped. He may have said many wrong things at the wrong time and in the wrong manner thus get himself spinned the wrong way. In fact, we have wrote of him back back in January. [Read here].

Let us leave the decision on his Ministership to his boss. 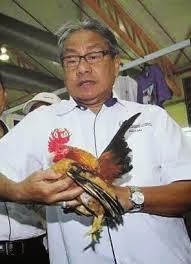 Hasan had been spinned and made the butt of conversation by the opposition when the press highlighted a remark he made. "Kalau ayam mahal, makan daging lain." Subsequently he earned himself the terrible title Menteri Chap Ayam.

His old school ways of communication and talking to the press and alternative media only made it worse. Below is some sample of his quote that had been lampooned by opposition: 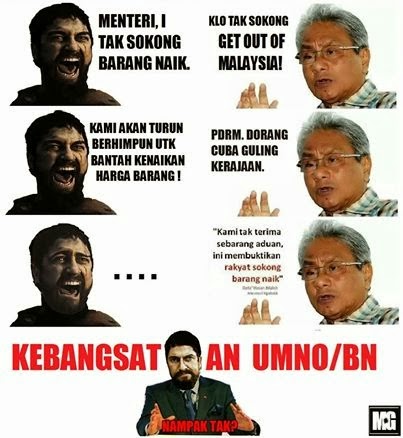 As a result, Hasan Malek was seen as a liability in Dato Najib's cabinet when what happened was that he was misunderstood.

But, some dude among the alternative media pulled a fast one on him to spread a rumour that he would resign. His response was to make a police report. Oh gawd ... that does not help his cause, does it?

Is it a crime or threat to national security to spread rumour of someone resigning from their jobs? If so, the police should place special branch officers to track the office gossips of all company and government canteens.

Read it in Malay Rights here of that episode. 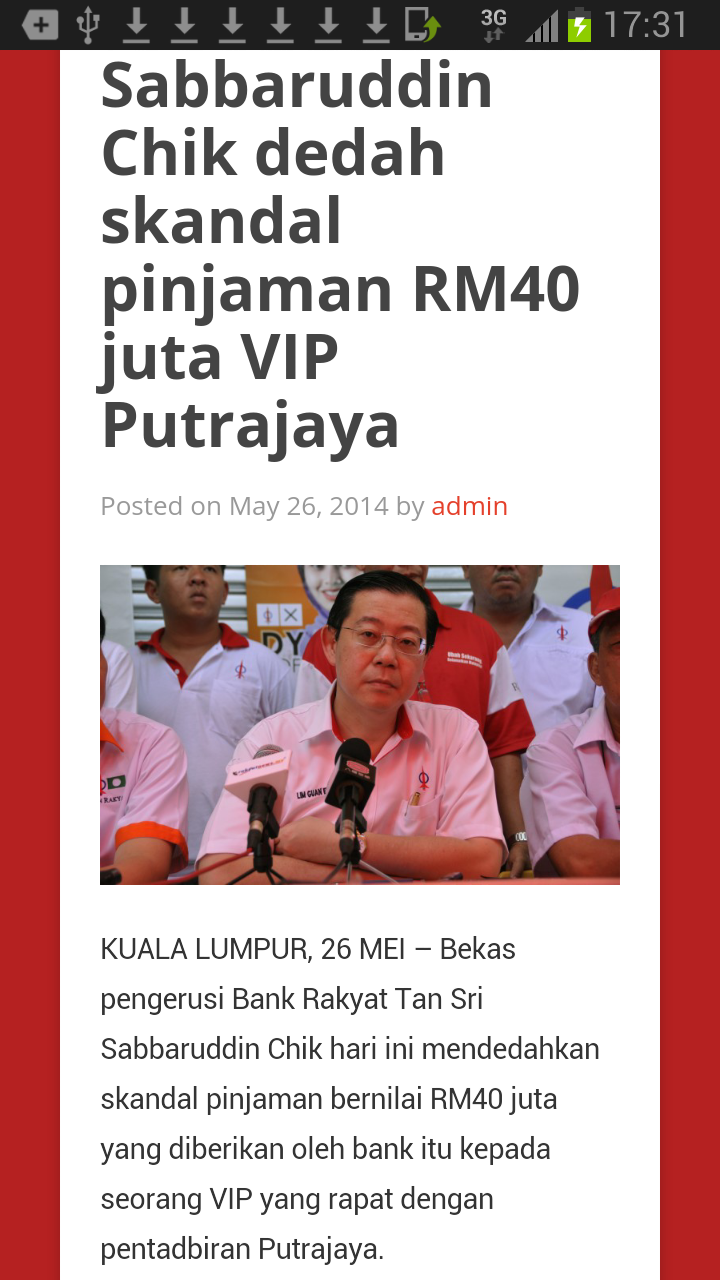 When former Minister, UMNO Secretary General and Bank Rakyat Chairman, Tan Sri Sabaruddin Chik revealed Deepak was given a foregiveness of interest and allowed to pay his outtstanding loan in installments over a long period, DAP jump on the political opportunity.

They tried to paint a picture to imply that there was some hanky panky going on between Deepak and Datin Seri Rosmah. The repayment was seen as a show of force to impose on the Chairman and Board of Directors of Bank Rakyat. [Read Bujai's critic here.]

There have been other strange going-ons between Deepak and Bank Rakyat as we pointed out in our series on UEM Sunrise [read here]. However, we are not so much concerned with what Deepak do as a businessman till we are aware of the specific infringement/(s).

What was heard is that Deepak had borrowed some RM60 million and it was approved by the Board of Directors headed by Sabaruddin. He got into a problem ... biasalah berniaga. But, he paid back some RM330 million already including liquidating his FD.

He has a balance of RM30 million in which he offers a layway plan.

So there is no interest charged. That is normal in any scheme in the repayment of bad loans. The only problem is and it relates to why there are many bankruptcis in this country is because the ducking Banks are lazy and heartmess!

They only want the easy way out of  bankrupting the defaultor so that they could account for the loss to be written back manipulatively as profit when it is repaid.

On this part, Hasan Malek is right. What would the Bank get back by bankrupting a resourceful businessman? Give the defaulter a lease of life so that he can repay back the loan. Lucky for Deepak that he got someone to talk to the Minister. Life is never fair, OK?

Imagine how many thousands of young people whose life being made difficult by Bankers just because they are lazy. The Banks were so eager to give them credit cards with a plural but when it got out of hand they pull the umbrella when it rains. These young people cannot get jobs and had to live on meager income. How the duck could the Banks get their right back? 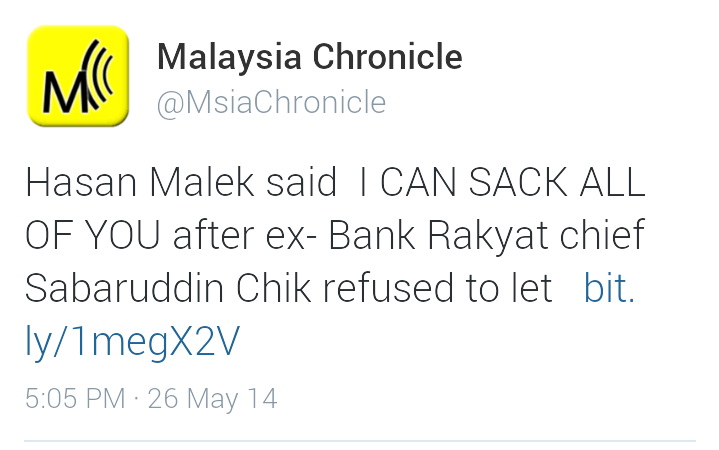 Sabaruddin is only angry because his Chairmanship was not renewed. He got it when his former Political Secrertary, Dato Ismail Sabri was Minister. At least, do realise that it is a different Minister now.

Sabaruddin had not cooperated with Hasan Malek. The Minister's power is merely in the appointments and he has exercised it accordingly. He has not interfered in the running of the bank. So what is the issue?

To put blame on Hasan, it is not fair. It was Sabaruddin who approved the loans to Deepak. By right, Sabaruddin should be charged under BAFIA like Rafizi Ramli for disclosing bank secrecy. Deepak or anyone could make a police report and it is done deal. 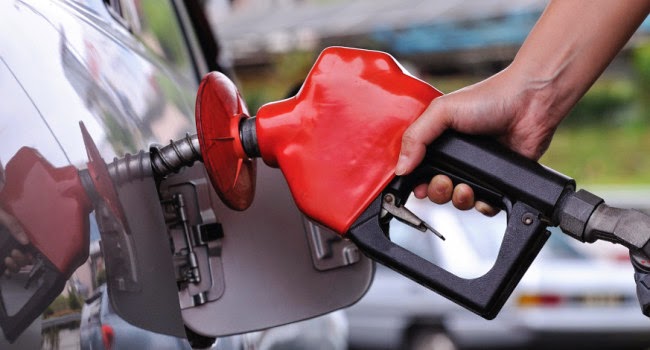 If you do not know what is KPDNKK, then refer to our article here on diesel sumggling. It is the Ministry empowered on matters of petrol and diesel subsidies.

Utusan Malaysia have been on the prowl on the diesel smuggling issue from Sunday, for today and believed to be tomorrow too.

We are not about to make fun of Hasan Malek for the droplets of seizure done by KPDNKK Enforcement team in Ops Titik. [Read here] It is already covered in our previous posting in which we believe the Government officers in Hasan's Ministry are on the take and all these are merely a cover-up.

Still, it is not Hasan that is being accused but certain public civil servants. So it is unfair to ask for Hasan's resignation. At least he showed the same concern with the Prime Minister on subsidy leakage despite Ops Titik is really a token effort.

We know that the major bust is coordinated by the Special Taskforce since it involved a high level and multi-agencies effort. KPDNKK is not empowered to undertake such kind of operations but allowed to take credit.

Our major concern with KPDNKK's Ops Titik is that it is scaring the bigger fish. Someone is giving the big boys a helping hand.

However, one issue with the current illegal diesel operation concerns a son of a VVIP and the VVIP is likely to be a Minister. He has been selling diesel confiscated by KPDNKK to wholesellers at 70 sen per liter.

To do this trade, there must be license and KPDNKK had issued a special license over an existing license for a bona fide operator. this information came from an honest KPDNKK officer. Hope Hasan address this or he could be misunderstood again.

Recently Hasan had made an announcement on a new system for managing diesel and fuel subsidies. [read Rakyat Post through here]. That had got the public fuming and politicians, BN and PR, demanding a review because it is not a practical solution and open to abuse.

Again, Hasan is seen as a political liability by BN. Critics were leveled at him to demand his dismissal or resignation. In his response, Hasan denied only consumers earning below RM5,000 are given subsidy [read here] and there are bloggers and social media activist defending him albeit immaturely.

In FMT report here, KPDNKK Secretary General, Alias Ahmad said government will introduce a new system beginning this Sept 1 to ensure the sale of subsidised diesel and petrol is only to eligible commercial vehicles. He said a similar system for private vehicles would be implemented in October or November.

One source deep inside MOF suspect that it relates to the fuel subsidy card system that will be implemented and someone have been confirmed the contracts. Her fear is that all these raids are only for show to get the public to agree. It will end the moment the fuel card contract is awarded.

If the account you gave on Deepak is true, then I will agree with you. Deepak has a right to negotiate how to pay the remainder of the loan since he is in financial difficulty. Whatever the decision that the bank has decided it should remain confidential.

On public disclosure by Sabaruddin on Deepak's loan, Sabaruddin has indeed breach the Bafia. He should be charged in court or at least ask him to keep his mouth shut. Probably we can ask KJ to tweet "SHUT UP" to Sabaruddin.

Deepak is a special breed of non-Malays in the same league as UMNOputra and its cronies. He knows too much of the dirty skeleton in UMNO. What is MYR30millions haircut to prevent him from exposing all the shady and dirty deals in UMNO. After all, kerugian ini akan dibayar kembali oleh rakyat jelita Malaysia terutama oleh Orang Melayu sendiri.

1. I have repaid my loan with Bank Rakyat throughout almost 3/4 of the tenure. I ran into difficulties since a few months ago due to the current economic climate. Nevertheless, I still service my loan intermittently. The bank officers have been harassing me via phone calls like i'm a criminal. Can someone talk to the minister to instruct the bank to stop harassing me and just accept whatever I pay so long as I keep paying?

Important note: I'm just a small fry and can do no harm to the big fishes.

2. My stupid suggestion is this. Just do away with import duty to bring the price of cars down to match with international prices. Then, abolish fuel subsidy (petrol & diesel) altogether. Enforce rules to scrap vehicles (except for antics) after 10 years of usage. The impact will be; when vehicles become cheap, no need to borrow heavily to own them; maximum loan tenure can be limited to 5 years, or those who can afford will be able to pay COD; we can pay for fuel at market price; when the loan is fully settled at 5 years, vehicle owners will have another 5 years to before he/she must replace the car. And don't forget to upgrade the public transport system.

Better quality of life, less pollution plus the government can save billions of ringgit in subsidy.