When everything turned awry 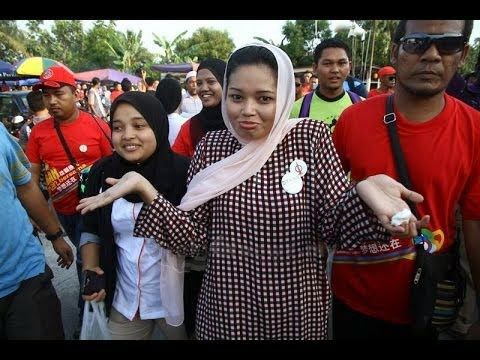 Sure, our call was almost exact. A BN win at even odd (no vote offer).

But, do not get away with thinking Chinese support has returned. Or Malay support remained intact. Or Indian did a complete turn around and gave support to BN.

Gen Y effect was not substantial yet, so DAP cannot, as Ong Kian Meng claimed, thing that there was a rise in Malay support.

If they wish to believe him, go ahead and put pretty young woman or pretty boy Malay candidates everywhere including the rural areas. Then, there will be three-way fight against UMNO and PAS, in which the outcome can be predicted.

If Dyana had won, it would have been a great message to UMNO that the old warlords have to go and fresh new untainted faces should be put forward.

As in the case of Dyana, it was one tough cookie to discredit her. She had no baggage but only a bitchy mouth.

For DAP to push a Gen Y, consider this simple survey by a friend on a sample of urban educated and sophisticated group of Gen Y.

Their answer was why her as a leader? Better, they vote themselves. They feel they are better than Dyana so why vote for her.

The young expect to vote a leader, someone with wisdom and leadership, and not some pretty face whose hardly had neither any work experience or public service track record. They want someone that can provide leadership.

That may have explained why only 3 buses out of 15 buses sent by DAP to fetch outside voters returned filled with voters.

If DAP thought, the number of Wilayah, Selangor and Penang cars on their finale night were outside voters, they should not kid themselves. They had fixed the first 10 rows with imported and well dressed in red supporters.

The fact that Ubah website had scheduled a live telecacst was a dead giveaway that it was all an orchestrated event and one can expect a big crowd or else malu lah. A Wanita UMNO in the audience commented that the applause only came from the front row near the microphone and video cameras but the back row were quiet and reserve.

Actually, putting up a pretty face, an eloquent expired license lawyer may have an effect with the simplistic and less politically conscience rural Gen Y. But, with low turnout, nothing conclusive could be derived.

So Ngeh Koo Ham is right to say Lim Kit Siang made a bad call. His high handed ways in DAP to insist on picking Dyana without gauging the local supporters sentiment indicate the man is beginning to lose his marble.

More so, looking at the odd match up of Dyana escorted by Kit Siang during the campaign trail. It is like watching Beauty and the Beast.

Without the benefit of numbers, our simple ground reading was that the older generation Malays stayed put but the Gen Y Malays generally did not bother to come out. The few that voted may have preferred for Dyana.

Another possibility for the low turnout in the Malay areas is some PAS supporters may have withheld their votes due to Dyana's blatant and brutal position in hudud.

On the Chinese voters, the trend of the lower turnout seemed to continue from Kajang. That is something to ponder.

As for Telok Intan, certain segment of Chinese were reviewing their position with DAP but not ready to give the vote to BN. The local chamber of commerce support for Dato Mah was not strong enough to bring BN the votes.

The Indians was expected to make a major shift but many did not turn-up to vote. The plantations allowed them to go to vote after 12 noon but by the time they are ready to go at 2 PM, it was raining heavily.

The better Indian turn out would have made the majority bigger. Nevertheless, Indian voters managed to sufficiently show their disgust for DAP. Most of the voting districts indicate significant reduction in DAP majority or turn to favour BN.

Dato Azeez, who campaigned as special envoy from the Prime Minister, has to deliver his promises. He wow the Indian crowd with his Tamil and managed to unite the Indian splintered into MIC, IPF, Makhal Sakti and NGOs.

Maybe he should run against Palanievel for MIC President and help solve the ailing original Indian component party of Perikatan and BN.

The Chinese and Malay Gen Y can claim credit credit for not coming out to vote.

Dato Ibrahim Ali and his Pribumi rights Perkasa NGO, who would not give their support to neither Gerakan nor DAP for their vicious attack on Perkasa, can also claim credit for his silence.

Perkasa had enough with the BN Chinese component parties since Chew Mei Fun said something insulting during Kajang by election. She did not know that Liow tried to privately seek for Ibrahim Ali support.

Lucky for BN, Ibrahim Ali was away in London or he would have blown his top for what was said of Perkasa. They have few thousand members in Telok Intan.

Heard Kak Yammy is sore on the cyber attack on herself and Dyana. Hey ... live with it. That is third world politics, which DAP is pretty much a major trend setter.

At least, there is more personal details of Yammy and Dyana still held back. The faction she is part of is no holier neither.

DAP should be more careful in labelling UMNO as politik samseng. They and their Red Bean Army are no better themselves.

Our last words to BN: UMNO, MCA, Gerakan and MIC ... please buck up too.

Their campaign approach were old school compared to DAP's very professional campaign. The slogan, posters, banners and leaflets does not attract the voters attention.

There was poor coordination between BN parties and between each party machinery and BN headquarter. When will they move together as one?

Internal bickering between various component parties occured. One case was between MCA and Gerakan over a bilik gerakan in Batu 12.

MCA seems to act like big taukeh with attitude. They wants others to support them when they run but hardly gave much support when others ran.

In the DUN Penang incident, they criticised UMNO Youth barging into the DUN but said nothing of UMNO Celaka remark by DAP. Ini macam ka kawan???

When all papers published BN win as front page, The Star ran the Telok Intan results in page 8 because DAP lost.

Among all, MIC is the most problematic in Telok Intan. Every other Indians hated MIC.

They are more trouble making hoodlums than providing the community leadership. They had no shame to seek publicity by hijacking events organised by volunteers.

Sabotage or at least, intention to sabotage was heard.

The win does not indicate much change. So Khairy should stopped this habit of making claims as though Pemuda did something substantial.

BN won because there were better strategist and tactician on their side. But don't praise themselves, it was not the BN leaders.

Sir,
Losing by nearly 7000 votes....is not a joke.Dato Mah received more or less the same as GE 13,but Dyana representing DAP votes were much to be desired or appalling.To add salt to the wound.Tk Intan is a Chinese majority area.BN votes still intact but where were more or less 7000 votes gone to.Granted with excuses given above,but the amount of votes lost was unthinkable esp for DAP in this situation.Be my guest for getting the reasons...PKR,PAS so so quite or they are minding their own business.

Even though BN has won, don't be carried away by the winning. Continuously improve in all aspects for the coming GE.

To say Kit Sing as a beast is quite complimentary. Then again he's more an old Dog and kept old tricks yet tge old dog still are not able to learn new tricks!

Given a choice I'd put him on a one way ticket to hell.