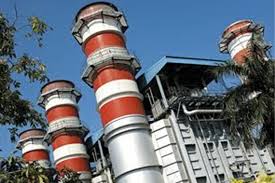 In our last Friday posting here, the concern was on energy security and opening new political front of problem.

Prior to the posting, Utusan Malaysia made a report on Thursday that Energy Commission (EC) had given exemption for 100% foreign-ownership to 1MDB subsidiary, Edra Global Energy Sdn Bhd. Their source claim that the decision was arrived in a meeting on September 8th.

This information  runs contrary to a September 30th report by The Star that quoted EC Chairman, Dato Abdul Razak Abdul Majid saying, "We are not the agency to regulate foreign partnerships or foreign equity in power plant operators."

Whether Utusan Malaysia source had been right or wrong, the Utusan report claimed the Ministry for Energy, Green Technology and Water (KETTHA) had rejected the application for exemption. They are sticking to a stated policy until such time policy is changed.

Knowing well EC is not empowered to make such decision, why did Treasury Secretary (KSP), Tan Sri Dr Irwan Serigar Abdullah wrote the letter to EC? Does he not know the jurisdiction of EC? Or someone directed him to write to EC on the expectation that the Board of EC will oblige?

The Utusan report below:

The Star reported below:


PUTRAJAYA: Foreign shareholdings in Malaysian power plants do not fall under the jurisdiction of the Energy Commission (EC), the industry regulator said amid talks that the sale of Edra Global Energy Bhd could be the first to see foreign ownership exceeding the cap of 49%.

“It is determined somewhere at the governmental level, but not us,” he explained to StarBiz after launching an improved mechanism to ensure cost-effective power generation, called the New Enhanced Dispatch Arrangement, here yesterday.

Sources had told StarBiz earlier that the Energy, Green Technology and Water Ministry (KeTTHA) had received proposals from several parties to waive the foreign shareholding cap of 49% in power plants in Malaysia for Edra – a unit of the controversy-laden 1Malaysia Development Bhd (1MDB).

KeTTHA had yet to respond to StarBiz’s queries on the matter as at press time.

Under prevailing regulations, foreign bidders are restricted to owning not more than 49% of power plants in Malaysia. This is a practice that had already been adopted by the EC when it put up the power plant projects for a competitive-bidding process.

Last week, a local daily reported that there were concerns about the power plants of Edra being sold to foreigners, as it would mark for the first time assets such as power-generation plants being controlled by parties who were non-Malaysians. The report further stated that more worrying was that the sale to foreigners would hamper opportunities for local vendors, including bumiputra vendors.

1MDB was supposed to have listed Edra by the first quarter of this year, but had to withdraw its application due to uncertainties in relation to a 2,000MW coal-fired plant dubbed Project 3B. The sale of 1MDB’s power assets has not only attracted foreign parties but also local players.

Besides Tenaga Nasional Bhd (TNB), the other companies that had expressed interest were YTL Power International Bhd and Malakoff Corp Bhd. But only TNB has put in an indicative bid.

Early this month, 1MDB said it had already shortlisted four parties for the final bidding stage for the sale of Edra, but did not disclose the names.

And among the foreign bidders, at least one, namely, Hong Kong-based CGN Meiya Power Holdings Co Ltd, had confirmed that it had been in talks with 1MDB in respect to the purchase of the latter’s power assets.

Edra has five domestic and eight international power plants with a total capacity of 5,500MW worth RM12bil collectively.

It is understood that the dateline for the bid was October 16th and three bidder had submitted proposal including TNB. 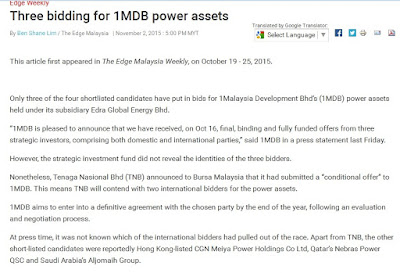 It was only reported on November 6th that QSC and CGN were in talk of a tie-up to bid for Edra. CGN Meiya decided to withdrew and the China parent company came in instead with the Qatari. Read Gulf Times here, ChinaDaily.com here, and The Star here.

The report claimed that there was a private direct negotiation. Does it mean the bid came in after the deadline?

It was reported that “value maximisation” and “deal certainty” would be the main criterias for the decision to be made soon. In simple words, it is a matter of price. But this bid attracted curiosity as Kinibiz reported [read here] a RM2 billion disparity in the bid.

The rush tie-up also raise the possibility of legal disputes between Qatar and China.

In his press conference last week, Arul Kanda mentioned of the need for exemption to enable 100% foreign ownership of Edra. That decision is a major decision to be left to government.

By the reports coming out, there seemed to be a conflict of jurisdiction. However, Ministry of Finance is the ultimate shareholders of 1MDB and TNB thus they should be able to make the decision.

Did someone in MOF passed the buck by instructing KSP to write-in to EC and KETTHA for exemption?

It is a convenient pastime to blame Dato Najib. However, his practise in making decisions will be not to pre-empt with his own but it will based on the various recommendations given to him. So who is the person below Najib but above KSP that passed the buck to EC to make the decision to recommend?

Major decision like this should have been brought to Cabinet.

who's brilliant idea is this... i would vote the guy as our pm