Edra Energy must not fall to foreigners! 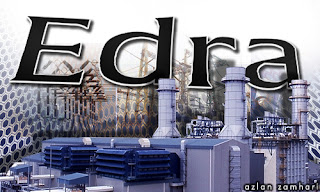 The wind of Edra Energy falling to foreign hands coming out of the 1MDB rationalisation have been blowing for quite a while.

At the time the rumour was shared in several of our WA groups - both the pro-Najib group and pro-Tun groups, 1MDB had announced Qatar and China Groups bidding for it. So it was brushed aside as merely speculation.

Furthermore, it was understood that 1MDB will hold about 20%, while local and foreign bidders will hold the balance shares in Edra Energy. So the concern was of foreign group/s holding the majority. Earlier, it was announced local groups expressing interest to bid for Edra are YTL, Malakoff and TNB.

A little bird flew on to our window ledge this morning to chirp that it is not for a certain percentage of equity but a take all bid.

To enable approval, the KSP had also written to the Energy Commission and Minister for Energy and Green Technology to seek exemption for foreigners to own more than 49% of Edra. There is a stated policy against foreigners owning more than that.

It means civil servants in MoF are not giving national interest the highest of consideration but only looking at financial consideration.

That is not good news.

In his press conference last Saturday, Arul Kanda had given the message that the rationalisation exercise is near completion. So game over ...

1MDB will pare debt down by RM45 billion - RM16 billion by the debt for asset swap with IPIC, RM11 billion hopefully through sales of 60% equity in Bandar Malaysia and estimated RM18 billion by the sales of Edra.

It could only mean the decision to award the Edra shares could be any moment now.

Energy - be it power generation or distribution - is strategically important to the country. It is vital for the livelihood of the people, fuel industries and an ingredient of nation building. Thus it should not be put at risk and fall to foreign hands.

The position to support 1MDB rested much on the attempt to consolidate the power generation sector to resolve the legacy logjam of subsidy given to IPP. It had to be removed to enable government reduce it's subsidy burden for petrol and diesel and stop excessive profiteering by first generation IPP tycoons.

At the same time, government need to balance it with the need to maintain and control energy cost at a reasonable level. Energy is a major cost component and it's price has to be controlled to buffer the rising cost of living.

The need for strategic control of power generation was necessary that critic on the alleged overpriced IPP purchased by 1MDB and political fallout for tampering with Tun Dr Mahathir's legacy was ignored.

The motivation to support was purely for the peoples' interest and to end the greed of tycoons. Public and national interest must supercede the interest of few. So the 1MDB-style of nationalising the IPPs was defended vehemently.

It is in the spirit of Mahathirism although Tun Mahathir have foresaken it by attending Bersih 4.0 and working with foreign media for sake of political expediency.

Another bird, but not a little one, told us last night that the bid by Qatar-China tie-up namely Nebras-CGN was heard to be about RM3 billion higher than that of TNB. The lower ringgit ever since the submission made their bid more attractive than the bid in ringgit by TNB.

It understood that Nebras and CGN had pulled out of the bid and Nebras-CGN made a new bid which came in after the deadline. That is unfair for TNB.

Not sure whether the bid was RM18 billion as estimated by Arul Kanda. However, money should not be the prime consideration.

Most corporate bid for government contract is seldom based purely on pricing but both technical, ability to deliver, technology acquisition, and other strategic considerations. Otherwise, YTL should not have been awarded Bestari.net at RM4.007 billion since there are other bidders lower than RM3 billion.

By having Edra Energy under TNB, it will raise TNB's power generation capacity to 70%. That is an important and strategic figure to ensure secured energy supply and TNB is not at the mercy of non-TNB power generator, especially foreigners.

It is ironic that 1MDB bought over local IPPs from local independent owners to have it consolidated and sold off to foreigners.

In addition to the reasons cited, Bigdogdotcom had enlisted 15 other well researched reasons as to why Edra Energy should be awarded to TNB here.

It could mean 1MDB will end up with sales proceed by less than RM3-4 billion from the expected amount but the benefit from power security and local ownership of strategic asset far exceed the monetary gain.

As a 100% government company, 1MDB can afford to do such strategic decision of long term benefit and not put monetary consideration as the foremost consideration. Quite sure, 1MDB could be compensated by many other means.

The political fallout from 1MDB is already serious and tiring. The trust deficit from 1MDB has not subsided. The public is still cynical on any official explanations on 1MDB. Thus, it would be foolish of the administration to create another political front of dispute.

why is it so great to reduce debt?
and u think this is all about that rationalisation plan?
jezzz

u know what. u and the others are trying to miniscule the real problem here. everyone knows why and for what reason. that is to try and isolate the company from the whole problem, and by saying the rationalisation plan works its like bathing it with holy water during baptism. suddenly the company is OK!

and by the way u should write a special post thanking mahathir for his effort on the company that rationalisation plan was mooted. and wsj for the donation.

we are all bored with these stupid nonsense answers by both MOF the government and the company. this isnt politics. it gives clear indicators that what kind of people walking in the corridors of power these days

and the failed IPO. no one from the company or even any prominent umno bloggers mentioned why previous effort to list it failed. even SC didnt even utter a daymn word. could it be because majority share by foreigners problem? if that so then arul kandasamy and the advisory board leader are confirmed stupid for trying to do something that is bound to fail.

most of voters are tired. but they discover something very valuable. and probably next pru somebody going down really bad

1mdb has become a taboo..if tnb take over edra, they might lose support from local banks...even risk its present banking facilities being withdrawn...how?...

I remember a decade ago your good self helped stopp IJN from being sold to Sime Darby. It started a wave and due to large public outcry it was shelved.
They became private anyway. They sold themselves but nary a protest from the public. I think the end always justifies the means in this country.

Ananda Krishnan the Pariah said...
This comment has been removed by a blog administrator.
5:32 PM