Game's over the moment Tony blinked 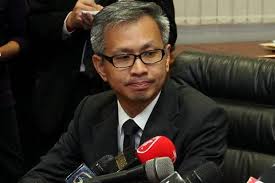 When doing MBA, there was a classic quote involving the one-on-one competition between Coca Cola and Pepsi Cola. Coca Cola made a bad move in 1985 to change it's formula and introduce New Coke. Pepsi CEO sent out a letter to all it's staff which had a great opening line.

"After 87 years of going at it eyeball to eyeball, the other guy just blinked."

In 1962, the American navy shadowed the Russian merchant ships carry missiles to Cuba in the Cuban Missile crisis. The Russian ship stopped midway and returned. In relief, then Secretary of State Dean Rusk whispered a great line to National Security Adviser McGeorge Bundy.

“We’re eyeball to eyeball, and I think the other fellow just blinked.”

Tony Pua and Arul Kanda have been going eyeball to eyeball to exchange many words and Tony Pua just blinked. So it is a futile effort of Wenger J Khairy to try cook up a spin [read here] that government flip flop to step in the moment Tony posed 10 questions.

Anney ... Government and parliament including the Speaker are two separate entities. It is called separation of power - Legislative, Judiciary and Executive.

The 10 questions is nothing more than a sideshow to score political points. 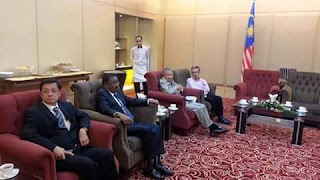 It is too late for face saving. The game's over the moment Tony Pua wanted a talkshow with him only doing the questioning.

He must froze when he reminded himself that Arul has documents backing him and could expose his bluff. He didn't expect Arul to accept without conditions.

Tony Pua is likely worried of the prospect that Arul could ask him on National TV of his link to Xavier Justo and Clare Rewcastle Brown. Xavier already filed for a lawsuit against him and the lot in Singapore!

The debate episode is now over.

Speaker decided that Tony Pua and Arul cannot debate. RTM pull back the offer for Friday telecast. Arul said he will abide with Speaker ruling.

The rest can continue to debate over whether a debate serve any purpose or Speaker ruling on Standing Order is right.

Maybe try salvage lost pride to create a buzz to replace Tony Pua with other MPs. It does not do it since the other vocal opposition MP on 1MDB, Rafizi Ramli not interested. He kid about two botaks on TV. They could try pit Jebat Must Die against Arul Kanda.

Nice try on Wenger for his attempt to make his readers forget that Tony Pua's insisted that only he can ask questions.

Before Arul's acceptance PC on Saturday, he was still politicising Arul's request that he withdraw himself from PAC. He said it is Dato Najib that should resign instead of him. PAC is more important than debate. It is a condition to avoid the debate.

Wenger may not be aware but the Speaker was going through the Standing Order few days before Tony Pua posed his 10 question on Monday. Speaker, Deputy Speaker, PAC Chairman and few others had a meeting on the matter over the weekend.

Nothing to do with government flip flopping. It is a Kota Belud thing. Maybe the water there.

As part of the investigating team of PAC, it is unethical and improper of any "Investigating Officer" or Judge to speak and let alone debate in public on any case they are involved. Furthermore, his fellow DAP MP and Deputy Chairman of PAC, Dr Tan Seng Giaw openly questioned Tony Pua's habit of making public allegations without the backing of any proofs.

Now that the debate is over and done with, how do one make out of the 10 questions posed by Tony Pua? The questions can be found in The Star here.

The first question is asking why Bank Negara made the decision to withdraw the approval. Hey Bugs Bunny! Go ask Bank Negara la ... not 1MDB. The subsequent questions in the first question are just accusations ala Tun Dr Mahathir, A Kadir Jasin and Jebat Must Die but disguised as question.

The second question(s) should be asked to Petrosaudi. So does the third one.

The fourth question has been asked before and responded publicly by 1MDB. Should have asked IPIC. So does question five but it has a sinister intention to say that money was not paid but funneled elsewhere. Still not the RM42 billion disappeared as alleged by Tun M or the USD700 million lump sum donation into Najib's personal account.

Question six can be simply answered. Money borrowed should not be left idle. It is a perception game but why borrow when project not taking off yet. This was a question this blogger asked Dato Shahrol. Bad decision is not a crime folks but stealing is. However must prove first.

Question seven is very Jebat Must Die. It is an error but they had voluntarily corrected it in Parliament. What is the fuzz?

Question eight is just need an explanation on the "debt for asset" swap with IPIC. It can be found every where. Tony Pua can google but why ask? Perception game and political brownie points too?

Tony Pua's 10 questions makes us amaze as to why he would ask such a highly technical question. It would take 1MDB management hours to explain some with an MBA in Finance. So it will take more for the public. Expect voices complain of being confused. A debate is supposed to make people understand.

Perhaps Tony Pua is telling the public that 1MDB is too complicated for the common Ahmad, Bernard, Chong and Devamany to understand. The very reason Jebat Must Die should replace Tony Pua to debate Arul.

Now that we know what Tiny Pea's 10 questions to Arul Kanda are, we can be sure of a few things....

(3) There was no mention whatsoever of Jho Low or the role he played in supposedly siphoning off millions if not billions from 1MDB when he seemed to appear in every flowchart that SR and the Edge produced.

(5) There was no question that would link the RM 2.6 billion donation to 1MDB or its subsidiaries or associates

(7) There was no question to ask 1MDB to explain why the land purchases by LTH and Affin Bank are not considered bailouts when the DAPigs have been quick to shout bailout as soon as those deals were announced.

(8) All the 10 questions were basically of a technical nature who will bore even Arul Kanda to doze off, never mind the audience, yet another pathetic piece of deceit by that goondoo Tiny Pea to impress his ever more stupid Zombie DumbAssPiglets and of course those Pooptuns. It's just recycling the same old shit that had been answered million of times over and over again

Basically, the 10 questions only prove 1 thing ie that Tiny Pea actually did not lose his telors. They just got shrunk into peas and then those peas were transplanted into his brain, so he is thinking with his pea sized testes now What a bloody waste of everybody's time that pygmy brain asshole is.

No wonder LGE claimed that the DAPigs are spoilt f or choice to select someone better than Tiny pea to debate Arul. Any stray dog that the piece of feces LGE culled recently would have been able to ask more intelligent questions