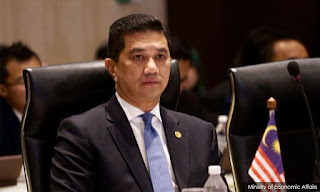 There is a controversy going on in Kelantan.

For many reasons, PAN is against the appointment of Dato Seri Azmin as Chairman of a Federal Government established commitee for Kelantan, abbreviated as MTNg Kelantan.

It is either PAN is not reading Mahathir's move or they are DAP's proxy to block the rise of Azmin.

As Economic Minister, Azmin was given many important tasks by Mahathir, possibly the establishment of another NEAC.

DAP blocked Mahathir from holding a Ministry and almost all agencies under PM Dept moved. Azmin became his conduit.

And, it does not stop there. It is believed that Azmin is depended upon to ensure a PPBM win at Semenyih.

Rumours among close circle is that Mahathir will be appointing Azmin as Deputy Prime Minister after the Chinese New Year holidays.

It should answer a question from a friend and PPBM member on the fate of Anwar Ibrahim.

Contrary to wishful thinking of some Anwar's diehards, Mahathir will not keep his promise.

Anwar is one of two persons which Mahathir effectively been saying, "over my dead body" for any of them to be Prime Minister.

If Mahathir is already dead, he will rise from his grave and do roadshow around Malaysia to spook Anwar from being made PM. 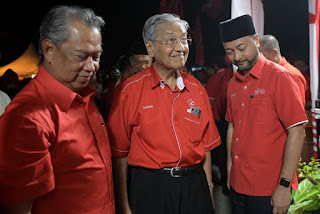 The formula is not known but Mahathir will not likely put Boboi as successor.

The former PMO boys may not agree, but Mahathir had once confided in private that Mukhriz is a weak leader.

Mukhriz is too much a Mama's boy - dipimpin, bukan memimpin (being led, then lead). Can't even get his wife to play role as MB's wife.

This blog has been endlessly saying for years that Mahathir's choice will be Azmin. If god permit, Mahathir will make his move soon.

Reggie Jessie Rithauddin claimed he has confided to someone that he may not last another year. It is only expected that he do something drastic. He will act at a time Anwar is procrastinating. 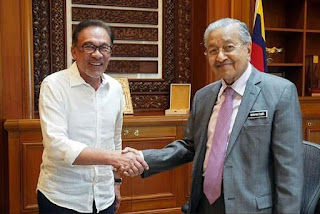 Anwar have been meeting friends, supporters, school buddies, fellow activists etc. to garner support, but he is not telling them the truth.

He claimed to have worked out the deal and arrangement with Mahathir for the transition of power.

While Anwar is gathering forces, Mahathir will do a blietzkrig before Reggie's hypothesis of a Barisan Baru Nasional (BBN) or this blog's mentioned Gabungan Perpaduan Nasional Malaysia (GPNM) were to be realised.

Mahathir do not care much for rules and convention. To quote one of his son, "When he wants something, he goes for it all the way". That is not a political genius but the unexpected move similar to a criminal.

It does not make any difference to Mahathir as to how Azmin would be taken to the top. Whether he and his followers leave PKR or join PPBM or form a new party, he should know what to do when he in position. 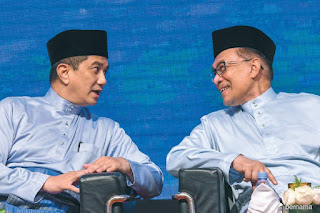 Apparently, this blog got wind that Azmin decided to stay put in PKR. It is more "economical" than doing a start-up.

More so, his team dominated PKR's VPs and MPP members. The appointment of Rafizi as VP is insignificant as he is no match for Azmin and Mahathir.

So, what is to happen to Anwar?

As written before in this blog, Anwar could be fixed up again. This time it is not sodomy III, but likely a trust fund issue. With a plan to put Anwar out of the way. it seemed logical to appoint Azmin as DPM.

The friend offered a table of the theoretical number of seats for Mahathir-Azmin faction: 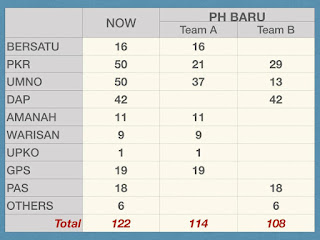 It was his basis to think Anwar days are numbered and Azmin would be next PM-in-waiting.

Unfortunately, it is an old estimate.

There have been many developments since Ku Nan was charged for a measly RM3 million corruption and Hishamuddin was told off, "Kau ni tak habis-habis mementingkan diri engkau saja, Hisham!"

PPBM supporters still think the lompat game is still on, but UMNO insiders confidently say it is off.

The claimed team A number among the UMNO MPs is not 37 but left with only the stranded 6 with the 3 that joined PPBM would be paying up their nose.

A few perhaps, but all 11 Amanah MPs may not take the risk to side with wobbly walking Mahathir. 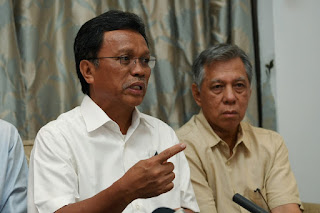 Do not be too sure Warisan is in the bag. Any unfavourable move by PPBM and Warisan could withdraw their support.

If PPBM take in any former Sabah UMNO leaders, so what of Shafie Apdal's Kedah father-in-law, Dato Shuib Lazim who is a close friend of Daim.

He has another father-in-law from Perak.

Sabahan is more concern today with their future than federal politics. It is a matter of time they will be as vocal as the Sarawakians on their MA63 demands.

GPS could take a realistic position but it is too optimistic to assume all 19 to support Team A. They need convincing.

What do Mahathir has to offer them other than threats such as opening PPB branch in Bintulu or allowed Sawarak Report to continue their attack on Pehin Taib Mahmud?

Will Sarawakians trust him to offer a settlement to MA63? Will they see any of his promise as just another typical broken promises of Mahathir?


Thus far, Mahathir has not commented of Abang Jo's announcement that Sarawak government would tax Petronas in accordance to a schedule in the Federal constitution.

Orang Malaya, even lawyers, by-pass the Schedule at the end in their reading of the Constitution.

Is Mahathir's silence an approval? Nah...

Then there is the question of the number of PPBM seats held by Muhyiddin's faction. The public think he is sickly with a terminal disease but his chemotheraphy treatment is complimented with dietary plan.

And, Muhyiddin still have ambition and had enough of being by-passed. His silence have meanings.

However, this UMNO totok will not return to a Najib-dominated UMNO.

However, Mat Hasan is indebted to him for shielding him from the political onslaught of Tan Sri Isa Samad and arwah Sahak Seremban in his first term as MB of Negeri Sembilan.

Mahathir can deny he is a DAP puppet, but it was him that said DAP called the shot. The important question in this political exercise of his is: will DAP support Mahathir or Anwar?

Politically, Anwar is weakening, waning in influence, and may not be a good vehicle for DAP to ride. But, DAP has rejected Azmin for Selangor MB post before.

Another point for DAP to favour Anwar is that he is in a position to make concessions to various agenda of DAP.

They are realistic to realise the power is not in the position held. More so, DAP will be seen as abiding to a promise and seen to maintain to the course of reform.

The one hurdle for Mahathir would be whether Anwar's lawyers - Tommy Thomas, Gopal Sri Ram, and Sulaiman Abdullah, who are prosecutors for government, will play ball. Lets not kid ourself to deny they are not aligned to DAP.

Sources claimed police investigation is completed and forget about IPCMC should Anwar not be charged. Police expect the case to see daylight in court.

A political war could breakout after CNY ....

In the meanwhile, take a rest from politics. Maybe there will be a new DPM after the Chinese New Year celebration and maybe not. Enjoy the holidays and the time with families.

And I wondered why some people are talking about a GE soon after CNY...It gets interesting by the minute.

Dont think PAS MP will be in B team.

I guess Abang Jo is one of Mahathir's headaches now. GPS has more seats than his own Bunga. Most Sarawakians don't even like Mahathir because we know MA63 is never even in his agenda (within 22 years of Mahathir 1.0, how many times he come here?). Sarawak MP in PH are busy NATOing. Habuk pun tarak.

And yes, we Sarawakians need another Tok Nan. Abang Jo isn't Tok Nan but I can see his effort there.

When will the politicking stop and the governing of Malaysia start?

We are on a downward terminal velocity yet nothing is seen to stop it save for the usual "politaik" served daily.

Yuks! Politics stings the way it is.

Let us move towards National Reconciliation and rid ourselves of the destructive traits.

What say you Tun Mahathir?

Get out your "Rhythm Stick" and ask Tengku Razaleigh to dance.

Bul... I concur. Am just writing on something.everybody loves... Entertainment.

Who wrote this article and who is your lead? If the owner of this blog has balls then disclose yourself and dont hide behind the bush.

My prerogative to write under a pseudonym. Osman Awang wrote a his work under pseudonym Tongkat Waren.

No need to hide under a Bush or Clinton or trump. I believe I am known entity. Was introduced last Monday and the person know me and my blogs.

The Bersatu ppl know who I am. Turned down their Chairman offer to join the fight to topple Najib.

You are forgiven for being a newbie.